Designed specifically for all the motorbike fans out there, IGT have released a new slot called Harley Davidson Freedom Tour. Since the 1900s, the famous manufacturer has made a huge name for themselves and now they’ve arrived on to the gaming platform – and don’t we just love it. Here you’ll be able to feel the wind in your hair as you try to control your adrenaline while winning plenty of cash. Even if you’re not too keen on motorcycles, there’s plenty of bonus features here that will keep you entertainedfor hours. Are you ready for the most exciting journey of your life? Well, read our detailed review and get ready for the ride!

IGT have always managed to create visually great games and it’s no different with Harley Davidson Freedom Tour. As you spin the reels, the backdrop takes the form of an open highway which is a complete blur as you race past at over 100mph. You’ll notice a whole range of biker-related symbols that include helmets, keys, jackets, and impressive motorcycles. A heavy metal soundtrack will play in the background as you attempt to win serious cash.

Harley Davidson Freedom Tour consists of 5 reels and 30 paylines that cannot be altered. This is largely due to it being a new game and most software developers these days don’t even give you the option to lower them because gamers have realised that it only damages their chances of winning. The game may not have the most paylines we’ve ever dealt with but some players may prefer this as it allows them to concentrate on the base game.

Players will be able to place a bet on this slot from as little as 50p and as much as £500. This means that high-rollers will definitely be impressed with the maximum offered. However, the lower-stake players who prefer a casual game may be put off with the minimum required. 50p does seem slightly high but it shouldn’t be a problem for most players. If you need to alter your bet then simply use the arrows either side of your amount.

You’ll be shocked but extremely pleased to know that the highest prize you can win on the base game is 2,500 coins which is enough to rival any slot! This huge amount can be won by matching 5 Harley Davidson symbols on a payline. Another lucrative symbol that you need to be looking out for is the yellow bike which will win you 1,250 coins for 5 on a payline. The bike with a grey background will win you 500 coins, and all the other motorcycles will gain you 250 coins.

Some slots rely heavily on their base game for entertainment, however we’re glad to reveal that Harley Davidson Freedom Tour isn’t one of those. There are tons of features available and we’re going to discuss them all now. We have mentioned the Harley Davdison symbol earlier and this also acts as the Wild – meaning it will substitute for all other symbols except the Bonus symbol. Keep an eye out for the Rumbling Wilds feature which randomly triggers anytime on the base game and allows for 4 chose symbols to turn into Wilds.

Harley Davidson Freedom Tour is a Level Up Plus game which means that you will unlock new features by completing different levels. There are 6 levels to progress through and each Bonus symbol you find will enable you to complete 1 mile, with 280 miles in total. If you manage to find the Bonus symbol on reels 1, 3 and 5 then you will trigger the Road to Riches feature where you can spin the bonus wheel and win prizes of up to 200x your original stake. However, there’s also chance to unlock other features on this wheel which we will discuss now.

The first one is the Free Ride Free Spins feature in which 3 free spins are awarded and one symbol is chosen at random on each spin. These symbols will become Wilds and 3 extra Wilds will become available on the final spin, meaning big cash rewards for you. Next up is the Expanded Top Award feature which allows you to spin the wheel and the segment of the top prize is increased in size which trebles your chances of landing it. Another is the Showroom Bonus feature in which you pick out a total of 10 boxes to reveal cash prizes or multipliers.

We then have the RPM multiplier feature in which you rev the bike’s engine in order to reveal a multiplier between 2x and 5x whenever you next spin the wheel. The features don’t stop there though because next we have the Bonus Trigger feature in which your chances of landing the bonus is increased. And finally, the Custom Shop Bonus feature where you’ll get the chance to fill a meter with matching logos and you’ll win the associated prize. Bear in mind that the top jackpot on this game is 400x your original stake.

IGT usually deliver great slots but Harley Davidson Freedom Tour surely has to be the best one they’ve released to date. We’ve never seen a game that offers so much entertainment and also huge prizes to match. Not only this, but visually it’s out of this world too. Dare we say it could be one of the best slots of all time? No seriously, it really is that good so make sure you check it out – right now! 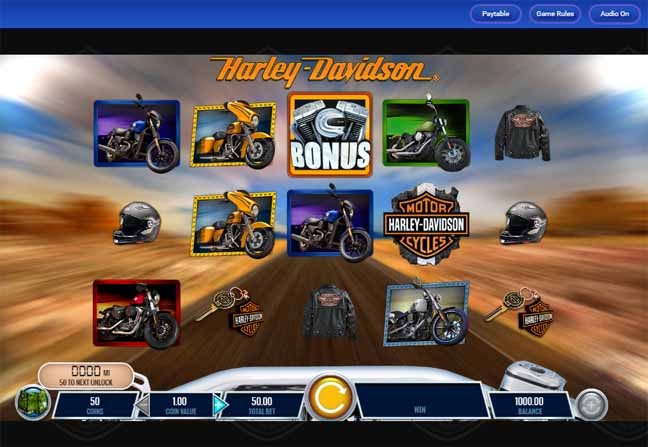 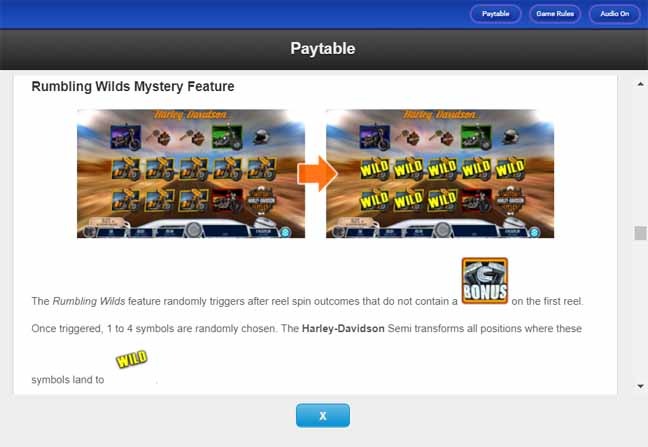