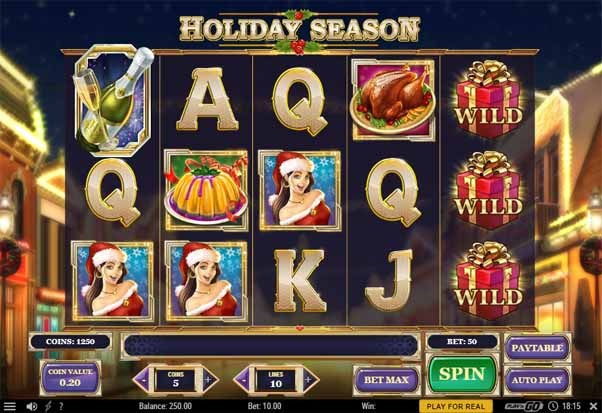 It’s that time of the year again when we can eat what we want, drink what we want, and play whatever Christmas Slots we want. It’s fitting then that Play ‘N Go have released Holiday Season – a simple game where festive graphics are the main source of attraction. Players may be forgiven for thinking this is a remake of Pimped by the same software developers as they are basically the same in terms of gameplay. They both come with free spins, have 10 paylines, and feature Wilds that are stacked throughout the base game. However, if you’re not a fan of the money, the bling, and the fancy designer coats, then Holiday Season is probably the better alternative for you. So why don’t you break up from work for a couple of week, take a read of our review, and start your holiday season off in the right style!

Upon loading the game for the first time, you’ll notice that it isn’t the most modern game Play ‘N Go have ever released but the dated graphics add to the traditional feel, allowing you to become embroiled in the festivity. There’s a well-lit street and a clear, starry night sky can be seen behind the reels. Symbols take on a Christmas party theme and come in the shape of a man in a suit, a glass of champagne, a lady dressed as Santa, a Christmas turkey, a clock and a festive jelly. There’s a very mellow soundtrack that plays in the background which allows for a laid-back gaming approach.

Holiday Season consists of 5 reels and 10 paylines which can be altered. Although there isn’t too many ways to win here, it allows for you to focus entirely on the game itself rather than being caught up with one that has loads. We advise players not to reduce the paylines as it will only damage your chances of winning. If the bet amount is too much then simply lower that instead and keep the paylines total on 10.

Players will be able to bet from as little as 10p and as much as £100 per spin which means that it will cater for many. Granted the maximum may not be enough for the high-rollers out there who make up 1% of gamers, but the minimum is definitely ok for those who like a casual game without blowing their wages. Players can alter the coin amount using the arrows either side, and there is an Auto Play and Max Bet feature to make your gaming a little easier and suited to you.

But is this holiday season going to be one full of joy? Well, the maximum that you can win on this game is an incredible 500,000 coins which is more than enough to make your Christmas a very memorable one! Winning combinations are formed the usual way from left to right and you need to match the same symbols to get a payout. The bet per line is then multiplied by the special index and you could find yourself winning anything from 3x to 1000x your stake. If you manage to find the man in the suit 5 times across a payline you’re in for 750x your original stake, while 5 of the lady in the Santa outfit will qualify you for 500x your stake.

There aren’t too many bonus features that we need to discuss here but they still remain your best chance of winning the biggest jackpots. There are some slots that offer loads of bonuses and others that rely on their base game for entertainment. Holiday season is definitely the latter but that isn’t necessarily a bad thing as some people prefer not to be distracted by the bonus features and instead like to focus on the base game, and the way it’s supposed to be played.

You need to look out for the Wild symbol which acts as the Christmas gift and you will get 100 times your stake for 5 on a payline. This symbol also substitutes for every other symbol – except the scatter which we will mention below – and will help you to form winning combinations.

The Scatter symbol acts as the bottle of champagne and 3 or more of these will trigger the Free Spins feature. Here you will get 5 free spins and each spin will guarantee you at least one winning combination, which means you will get a prize each time! What’s good about this feature is that it can be retriggered with a total of 20 free spins available. There’s also 2 extra free spins per scatter that land during this bonus round. This is your chance of winning the jackpot and can be done if you manage to achieve the 20 free spins and get a bit of luck. 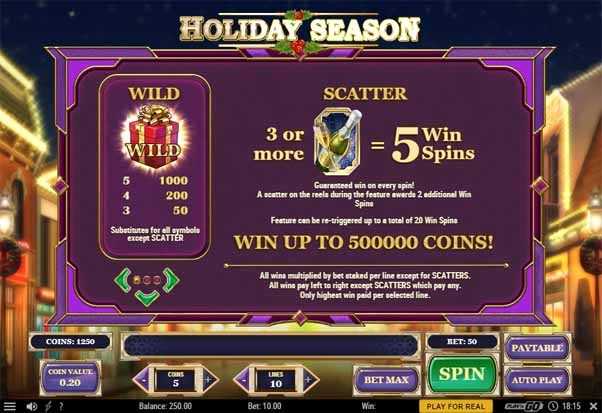 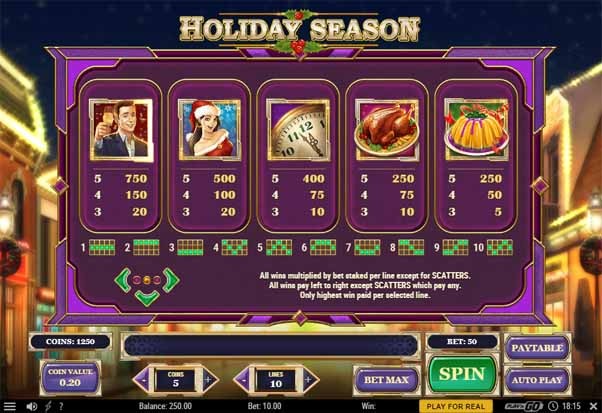 This is a simple game from Play ‘N Go but don’t be fooled by that as there is a load of cash to be won. Yes, there aren’t many bonus features but who’s going to care when you can be winning 500,000 coins? No matter what your budget is, you’ll have a fun time playing Holiday Season and it will definitely help you get into the festive spirit – if you’re not already. It’s fitting that such a giving and generous game has arrived just in time for Christmas, and it could turn out to be a very memorable one.