For those living in China, Huangdi is a legendary name – he is the man who ruled over 5,000 years ago, and is credited with bringing civilisation to the country, as well as the man supposedly related to every Chinese person in the world. In the Western world though, his name isn’t quite as recognisable – although Microgaming have decided to do something about that, by making him the theme of their new slot! With many great features and some huge prizes, this is a slot that nearly everyone can enjoy – even those who haven’t quite been acquainted with the so-called Yellow Emperor before!

Those looking for a complex online slot with loads of twists and turns might be disappointed with this game, as it does follow the rather traditional path of other slots that have gone before it. This isn’t necessarily a bad thing though, as it makes it a great choice for new online slots players, as well as a really good choice for those looking for something a little simpler to play. Although simple to play, there are some enjoyable features though, which are explained in more detail further down this page.

But what about the basics of the slot? Well, it offers players the chance to play 25 different paylines, and the amount you bet per spin can easily be altered. The paylines are fixed though, so there is no option to reduce the number if you’re looking to save a bit of money per spin. The minimum bet per spin is 0.25 coins, while the maximum bet size is a pretty impressive 125 coins. The fact that the minimum bet is higher than many other slots does mean that those with smaller account balances might be slightly put off playing though, but the large maximum bet makes this a great choice for high-rollers with decent sized account balances.

The prizes at Huangdi The Yellow Emperor are perhaps the least appealing part of the game, as the maximum win per payline is set at just 250x your bet. While this can still lead to a large prize, it doesn’t rival the maximum prizes found at some other slots. The fact that this is a low volatility slot makes up for this though, as it means that you can expect plenty of smaller wins spinning into view when you play. The low volatility of this slot is neither a good nor a bad thing, as every player has their own preference when it comes to this aspect of online slots.

It’s also important to mention the audio at this game, because… there is barely any. So, those who aren’t fans of annoying background music will be pleased, as the only thing they’ll hear is the spinning of the reels and the sound effect when a win spins into view.

Bonus features are an integral part of most online slots nowadays, and are one of the main reasons why people enjoy playing them so much. Huangdi The Yellow Emperor doesn’t have the largest range of bonus features to offer, however there are still a few that players should enjoy. The most important of these is the wild symbol, as it is at many online slots, as this is the bonus feature that will help you win money most often. It is represented by the game’s logo, and it can substitute for all other symbols on the reels, aside from the scatter symbol. Unfortunately, unlike many slots, there is no multiplier applied to wins when they contain a wild symbol.

It is also interesting to note that all of the game’s high paying symbols appear stacked on the first reel during the base game, aside from the wild symbol. When one of these symbols completely covers the first reel, all of the same symbols elsewhere on the reels will also expand to cover their reels. Huangdi himself comes stacked on all reels though, and not just the first one. This stacked reels feature comes into play reasonably frequently at this game, and can lead to some really nice winning combinations. It’s even better during the free spins though…

During the free spins, the stacked symbols are still in place, but they won’t just cause the same symbols to expand elsewhere – they’ll also cause all wild symbols to expand and cover their reels as well. What’s more, wild symbols can also be stacked on the first reel during the free spins.You’ll also get a small cash prize just for spinning in two or more scatters anywhere on the reels during the base game.

Huangdi The Yellow Emperor is a slot that most players should really enjoy playing, and this is mainly thanks to the theme, which is a really interesting one. The prizes might not be as large as those found at some other slots – although they are still well worth winning – however the gameplay is really easy, and the bonus features are good ones. The high minimum spin amount might put off some lower stakes players, but for everyone else, Huangdi The Yellow Emperor should be a great choice. But what else would you expect from a company with the prestige and experience of Microgaming? 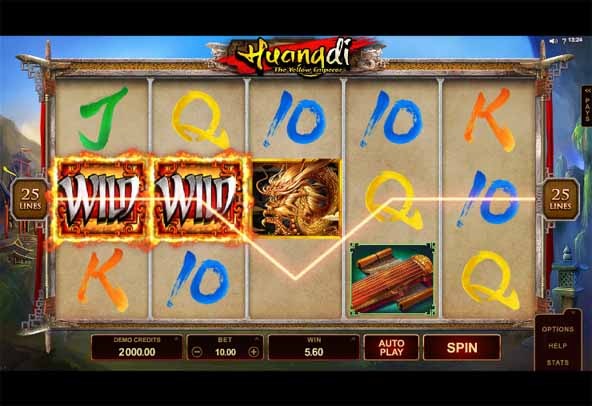 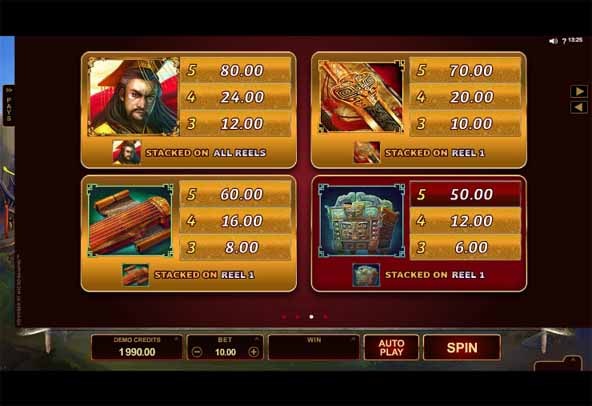