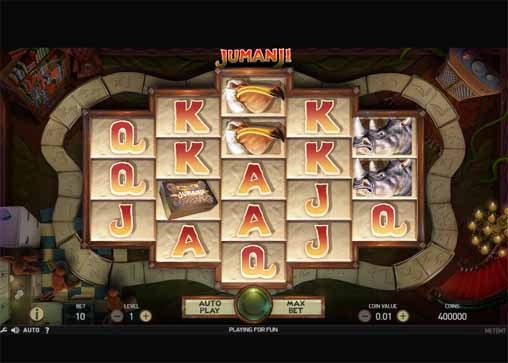 Jumanji is a classic movie from the 1990s, which has recently been remade into a blockbuster starring everyone’s favourite wrestler, Dwayne “The Rock” Johnson. This Jumanji only slot focuses on the original incarnation of the film though, and it offers more excitement, fun and surprises than even the film itself. On this page, we’re going to let you know everything you need to know about this fantastic new online slot from NetEnt, so you can decide if the Jumanji online slot is perfect for you or not.

Jumanji is a slot with five reels and 36 paylines – a slightly strange number of paylines to have, but more than enough to bring loads of excitement. The reels are not like you’re used to seeing though, as they’re instead in a pyramid shape, meaning that you’ll find reels one and five are three symbols high, while reels two and four are four symbols high. Reel three is the largest though, as this contains an impressive five symbols. This unusual design is great, as it really adds an extra dimension to this online slot machine.

What are the bet amounts like? Well, both low stakes and high stakes players should find something to suit them here, as the minimum bet amount is just 10p, while the highest bet you can make is a pretty impressive £200. This is the case regardless of whether you’re playing on a desktop or a mobile. Changing the amount of money you bet is simple – just alter the “Level” and “Coin Value” fields.

The prizes are Jumanji are also pretty impressive. The highest paying symbol on the reels is the lion, which can lead to a prize of £2,800 when you get five across a payline, however all other animal symbols also have some big prizes attached to them. The lower paying symbols, as is usually the case, are those featuring J-A symbols, however even these can help you to scoop some reasonable prizes. As you’ll see shortly, the many bonus features at Jumanji can also help you to win some spectacular prizes too.

There are loads of bonus features at this online slot machine, however the first to mention is a simple one: the wild symbol. This can replace most other symbols on the reels in order to create winning combinations so, as you can imagine, this symbol is really rather useful.

You’ll then find that there are four random features that can occur at any time, and the first of these is the Sticky Vines feature. This sees you awarded respins, and all winning symbols stick to the reels, with the other symbols respinning. You can then collect new winning combinations, and the game continues until no new winning combinations appear. Then there’s the Monsoon Wilds feature, which sees one or two entire reels turning wild, and then there’s the Monkey Mayhem feature, which sees the symbols shuffling around and eventually coming together to give you a guaranteed win. Finally, there’s the Wild Stampede feature, which sees from four to nine wild symbols added to the reels.

The most fun comes when you manage to spin in three or more board game symbols on the reels, as doing so allows you to actually play the Jumanji game! You’ll get a certain number of rolls of the dice, and you will move along the board. When you’re doing this, you can win cash prizes or extra rolls, plus you could also activate one of the four free spins features, or the special mystery bonus.

As mentioned, there is also a mystery feature that can be activated while playing the board game, but what is this? Well, it is essentially a carousel of the different free spins features, as well as cash prizes – you’ll win whatever the carousel happens to land on.

Jumanji is a superb game and even those who haven’t seen the film should really enjoy playing. The prizes are large and the graphics are great, however the main reason why you should play is simple: the fantastic features. The bonuses at this game are some of the very best around, plus they can lead to big wins, and they elevate this game above most other online slot machine games. Visually we found it to be similar to Jungle Spirit: Call of the Wild So, if you fancy playing a fantastic slot today, why not play Jumanji at your favourite NetEnt casino. 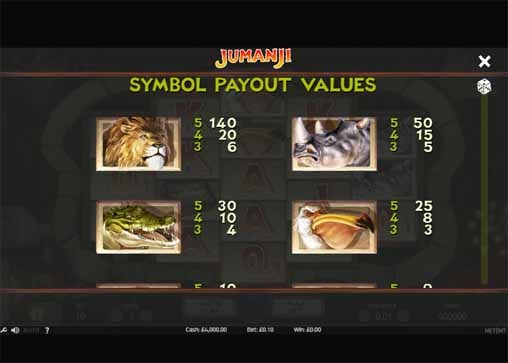