Anything to do with superheroes is pretty popular right now, and that’s certainly the case when it comes to slots. The people over at NextGen Gaming have managed to produce one of the best superhero slots around, and it centres on some of the biggest names in the comic book world – names that, when brought together, create the Justice League! So, you’ll see superheroes such as Superman, Batman and Wonder Woman spinning around on the reels when you play this slot.

This is a slot with a fantastic look, as all of the symbols stay true to comic book form. You’ll instantly recognise most of the characters on the reels, and all of them will be able to bring some decent prizes when they spin in. As you might expect, Superman is the highest paying symbol, while Batman and Wonder Woman also offer big wins. While the base game is good, it’s the bonus features that make this slot stand out though, as you’ll see further down the page.

Playing this slot is really easy, as NextGen Gaming haven’t thrown in any unusual features. The 25 paylines are fixed, so you won’t be able to alter the number you play, however you can choose how much to bet per payline before you get the reels spinning.

Bonus features are important aspects of most slots, and NextGen Gaming have ensured that there are a number of great ones at Justice League. The wild symbol is pretty easy to spot and appears on reels two, three and four. You could also randomly activate the Team Rescue Feature on any spin, which will cause a symbol to turn wild on reel two, three or four.

There’s also a really exciting feature called the Super Hero Power-Up Feature, which happens when the entire first reel is filled by the same super hero, and when one of these symbols features in a winning combination. Reel one will then be duplicated on reel five, and all symbols containing that character – as well as all wild symbols – will be held in place. You’ll then get a number of respins, during which any more of the specific character’s symbols, as well as wild symbols, will also be held. The feature stops when the character or a wild symbol fail to spin into view.

The main bonus at this slot is the Attack on Metropolis Feature, which happens when you get three of the Bonus symbol scattered anywhere on the reels (the Bonus symbol is also this slot’s scatter symbol). You’ll then receive ten free spins, and while they are active, there will be extra wild symbols on the reels. What’s more, free spins can be retriggered while the feature is active.

Once the free spins are over, that’s not the end of the action, as you’ll then start the Super Hero Spins. Reels one and five will always mirror each other on these spins, and will always be entirely covered by the same superhero. All wins containing a wild will have a random multiplier attached to them, with a 10x multiplier being the highest possible, and every wild symbol that spins into view will also award an extra respin.

Finally, there’s a Gamble feature at this slot, where you can either double or quadruple your prize – or lose everything you’ve just won. Whether you choose to use it is completely your choice.

There are many superhero slots out there, however Justice League has to be classed as one of the very best. The graphics at the game are superb, and the prizes can be really large, however it’s the bonus features that are the best aspect of this slot from NextGen Gaming! 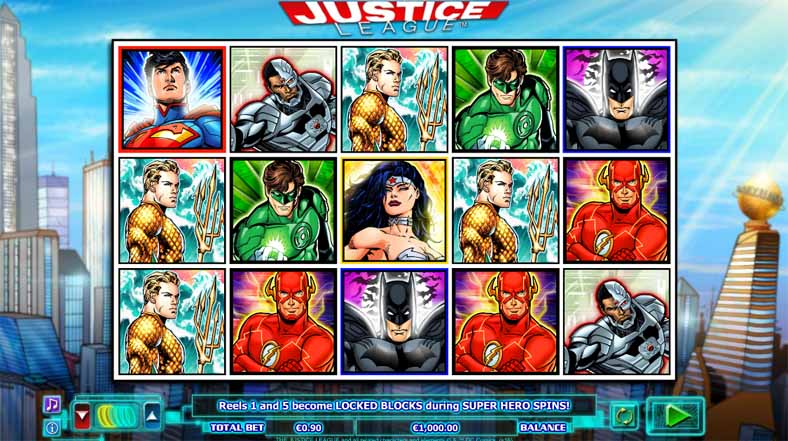 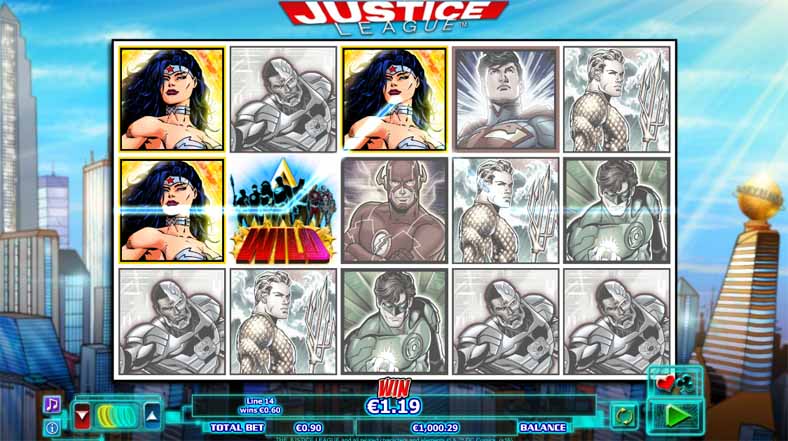 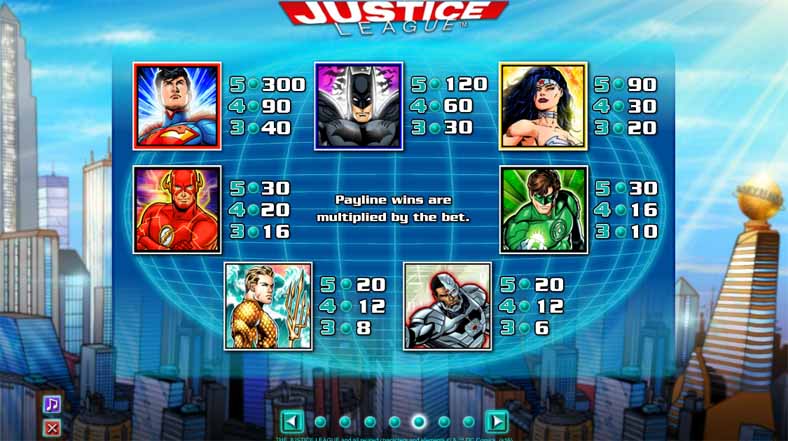