Koi Gate is one of the latest online slots from Habanero – a company that is starting to really make a mark in the world of online casinos. Their slots typically look absolutely fantastic and offer some really enjoyable features, and this is certainly the case when it comes to Koi Gate. This is just one of many recent slots based on China, as the online gambling world looks to capitalise on the growing market there, however this doesn’t mean that Koi Gate isn’t great for players from the rest of the world as well – in fact, all players should have a few spins of this slot when they next get the chance.

Visually, Koi Gate is absolutely fantastic, as it is full of colour and really manages to differentiate itself from the many other slots that feature underwater themes. All of the symbols have been designed to look stunningly beautiful – even the standard J-A symbols – and the background is a beautifully rendered piece of art. The music is also good, and doesn’t become annoying, even when playing this slot for long periods of time. When all of this is combined, it becomes clear that Koi Gate is a visual and audible feast!

In terms of the practical aspects of this slot, the layout is the same as the vast majority of other online slots, meaning that you’ll find five reels, each of which are three symbols tall. The game has 18 fixed paylines, meaning that you always have to play all 18 of them, however there is a twist when it comes to the paylines. Instead of only paying from left to right, they also pay from right to left. This effectively means that this slot actually has 36 paylines.

Before you spin the reels, you can easily change the amount you bet per spin. The minimum bet is £0.18 (£0.01 per payline) and the maximum bet amount is a colossal £900 (£50 per payline). Wins are calculated by taking the appropriate figure from the paytable, and then multiplying it by your bet per payline.

In the world of online slots, there is one aspect more important than anything else though: the prizes. At Koi Gate, the most you can win per spin is 150x your bet per payline which, when playing at the maximum stakes, means that the jackpot is £7,500. This might not sound like a huge amount, however this slot does have a respins feature – which is explained in the next section – therefore meaning that you could win much more per spin than this amount. In fact, the maximum win per spin is set at a massive £2,500,000, which most online casino players will acknowledge as being pretty impressive! The highest paying symbol at this slot is the blue dragon, however the red gate and the purple flower are also high paying symbols as well.

Koi Gate is a mid-variance online slot, meaning that the risk and reward ratio is pretty balanced. This makes it a good choice for those looking for the excitement of some big wins, but who don’t want to risk the possibility of losing all of their money too quickly.

Koi Gate isn’t too heavy on bonus features – instead, Habanero have seemingly concentrated most of their energy on creating an online slot that looks and feels absolutely fantastic. There are a few features to mention though, which both enhance your enjoyment while playing, and increase the amount of money you can potentially win.

There are not actually any second-screen bonuses at this site, which might put some players off. This means that all of the action takes place on the reels, however certain symbols spinning into view on the reels can lead to a couple of nice features, and the first of the symbols to look out for is the koi, which is one of the wild symbols at this slot.

The koi symbol isn’t a normal wild symbol though, and this is for a couple of reasons. Firstly, it is an expanding wild, which means that, when it is part of a winning combination, it will expand to cover the rest of the reel. This means that it could then create additional winning combinations – meaning more money for you! Whenever a koi symbol appears on the reels, you will also get a free respin. These respins will continue until one of them results in a koi symbol not appearing on the reels. What’s more, all prizes won during these respins are doubled.

The only other symbol to look out for when playing is the blue dragon, which is also a wild symbol. It is just a standard wild symbol though, meaning that it doesn’t expand, doesn’t have multipliers attached to it, and won’t lead to free respins. It can still prove very useful though, as it can help you create some big winning combinations.

The lack of bonus features might initially put some players off when it comes to playing Koi Gate, however those who take the plunge and start playing will find that this is actually a really exciting slot though. The prizes that can be won are pretty good, and the gameplay is incredibly exciting and intuitive. It’s the overall look of this slot that really makes it stand out from the crowd though, as there aren’t many online slots out there that look as good as Koi Gate. 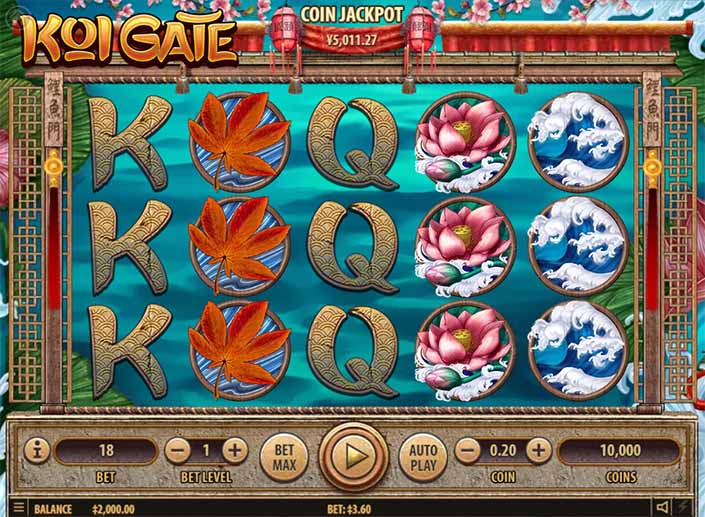 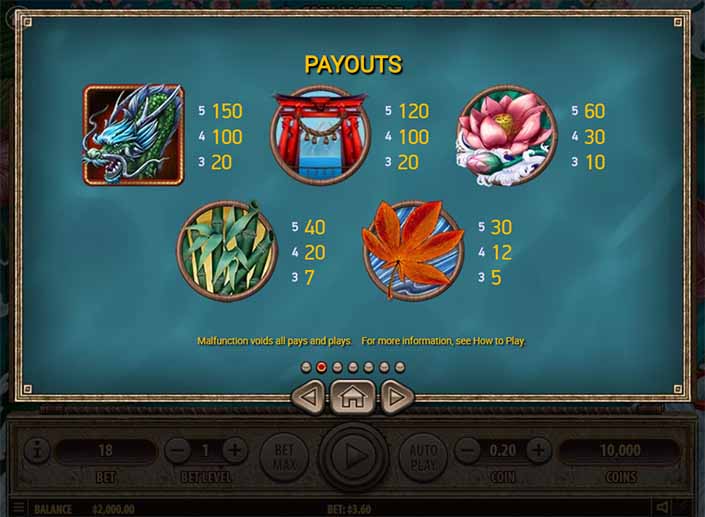