Fans of the Lara Croft series love the series of video slots based on it. The latest one is Lara Croft: Temples and Tombs. Lacking traditional pay lines, it is a slot with the 243 ways to win feature. This means that winning combinations are created when symbols on the reels match, starting from left to right.

The success of previous Lara Croft slots will likely make Temples and Tombs a hit with players. The popular movie franchise was turned into a series of slots because so many people enjoyed them. The good news for fans of the movies is that the slot machine games are just as high quality and exciting.

One of the reasons why Temples and Tombs are in a position to be so successful is that it is a Microgaming title. As a giant in the online casino industry, Microgaming has a long history of developing the best slots. Their titles are always packed with bonus features that enhance each game. This streak continues with the latest addition to the Lara Croft series of slots. There is no doubt that this one will not disappoint players.

All of the symbols on the reels are taken from the movies. Lara Croft is the main attraction on the reels. Other symbols include climbing equipment, artefacts, torches, bags and flasks. The background of the game seems to represent the wall of a temple. On either side of the reels are jewels and gold piled up.

Players can look forward to rolling reels in Lara Croft: Temples and Tombs. This feature can help players win even more money. The reels continue to roll for as long as winning combinations are achieved. This is a favorite feature among many players. The addition of multipliers to the game makes rolling reels potentially even more profitable.

In addition to the bonuses, the game also offers three jackpots; minor, major and grand. 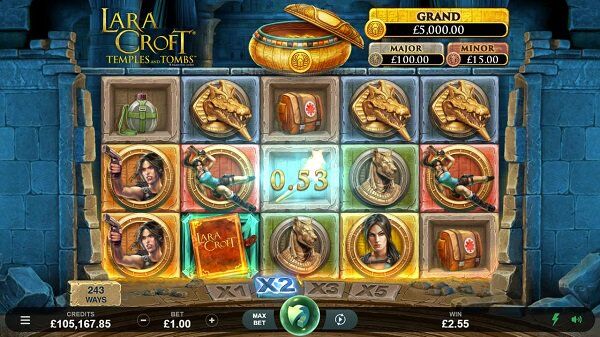 The appeal of games like this is that even those who aren’t fans of the movies can still have fun. The game is interactive enough to catch most players’ attention. The pursuit of the various jackpot prizes is no doubt one of its biggest selling points. The rolling reels and 243 ways to win add more excitement to the game than it could ever hope to offer otherwise.

Each of the Lara Croft games seems to succeed its predecessor in terms of player satisfaction. The same thing will likely happen with Temples and Tombs. There are few aspects of the game that any player would argue with. Overall, Lara Croft: Temples and Tombs is set to take its place in slot machine history.