The luck of the Irish – it’s a pretty popular theme at online slots, and has been ever since online slots first became popular. This shows that there’s clearly an appetite for slots with this feature, but it also means that any Irish themed slot has to be really good – if it’s not, it will simply get lost in the pack and forgotten by slots players. So, does Leprechaun Hills, the slot from Quickspin, manage to elevate itself above the other slots with the same theme? Well, it certainly does, as it offers some nice features, as well as fantastic gameplay and some really nice prizes. It might not be a complex slot, however it’s definitely one that most players will really enjoy.

The layout of Leprechaun Hills isn’t the same as most other slots, as each of the five reels features four different symbols, as opposed to the usual three. This might only look like a small tweak, however it has a huge effect on the enjoyment players experience when they play. Despite the extra symbol on each reel though, there are still only 40 paylines at this slot, however this should still be enough to keep most players happy. If not, there are plenty of other online slots out there with many more paylines.

The graphics found at Leprechaun Hills certainly aren’t the best around, although they aren’t the worst either. The reels are set against a backdrop of rolling hills, while the symbols themselves are nicely made, but not extravagant. Players will notice a lot of 10-A symbols on the reels though, and this is disappointing. This is because it’s always nice if a slot uses unique symbols, instead of falling back on standard ones. Some slots get away with it, by making the standard symbols look great, but the creators of Leprechaun Hills have instead made the 10-A symbols look pretty ordinary. Still, graphics aren’t everything at an online slot, and Leprechaun Hills makes up for the average graphics in other areas.

As already mentioned, there are 40 different paylines at this slot, and these paylines are fixed. This means that you have to play all 40 paylines on every spin of the reels. It is possible to alter the amount you bet per spin though, with the minimum being £0.24, and the maximum being £80. The paytable changes as you alter your bet amount, to reflect the amount of money you could win on your next spin of the reels.

But what about the prizes? Well, the highest paying symbol during the base game is the leprechaun, and he is worth 25x your bet per payline when you get five of him across a winning payline. This doesn’t sound like much, but remember that you can get multiple winning combinations on a single spin, therefore meaning that the maximum prize per spin is actually much larger. Other higher paying symbols include the horseshoe and the four-leaf clover. The variance of this slot is on the higher side, meaning that you’ll often have to play for a while before getting a win, but that this win is often quite a large one. It’s down to your own personal preferences whether a higher variance slot is best for you.

The first of the bonus features to mention at this slot is the wild symbol, and it shouldn’t be too hard to work out which symbol this is. It performs the same function as wilds at most other online slots, in that it can substitute for most other symbols, and therefore help to create some nice winning combinations. What’s more, the wild symbol comes stacked during this game, meaning that it can potentially fill an entire reel – something that leads to a greater chance of you winning a nice sum of money.

The next feature to mention is a really exciting one, and it is called the Lucky Respin feature. This occurs during the base game, and springs into life whenever you get a win featuring a mid-range symbol. The reels will respin, and the symbol in question will be stacked on the reels, therefore meaning that you stand a good chance of winning a nice cash prize when the reels finish spinning around. It should also be mentioned that some symbols come stacked during the standard spins as well.

The main feature at this slot is called Rainbow Free Spins, and it is activated when you manage to get three Bonus symbols anywhere on the reels. When you manage to start this feature, you’ll be given seven free spins in total, and they have a slight twist to them, as an extra symbol is added to the reels. This symbol is a rainbow, and it will transform into a mid-range symbol whenever it spins into view. This could help you to complete some high-paying winning combinations. It’s not the most exciting free spins round found in the online slots world, but it can lead to some good prizes.

Leprechaun Hills does enough to ensure that it isn’t seen as just another Irish themed online slot, and this is mainly thanks to the decent features and the simple gameplay. There are a few areas of this slot that some players might not be overly happy about, such as the relatively low jackpot amount per payline, however overall players should enjoy their time spent spinning the reels at this slot from Quickspin. 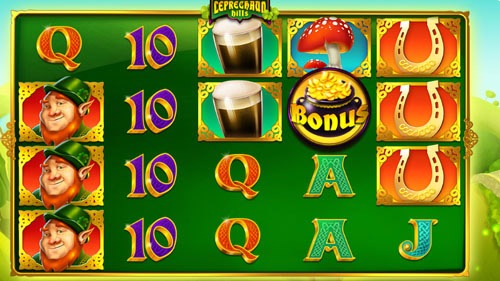 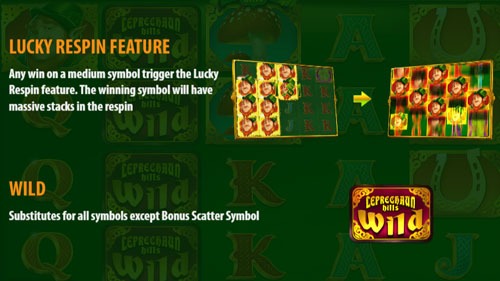