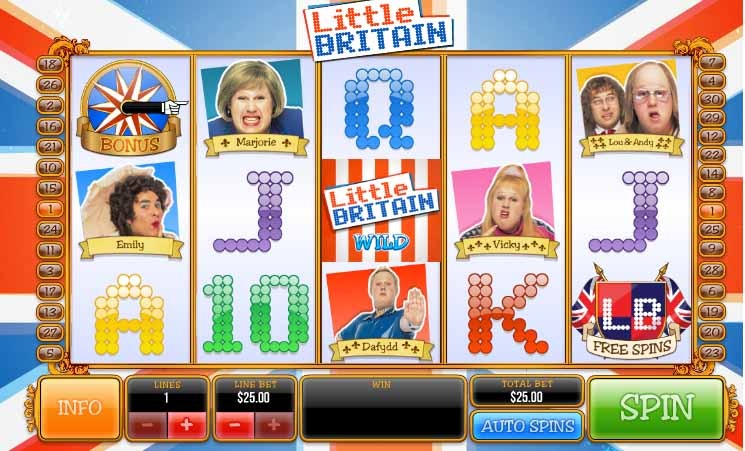 Little Britain is a unique video slot machine named after a TV show. When players launch the game they will see the show’s opening credits. Tom Baker’s voice narrates the game and the sound effects and music used are taken directly from the show. Afterwards the credits are over a screen pops up that explains the free spins and bonus rounds. Players can then begin the game.

Another unique aspect of Little Britain is that players can double click on the spin button to spin the reels twice as fast they would otherwise. This allows players to speed up the game if they are pressed for time.

The symbols used in the game are the TV show’s characters as well as the TV show logo and a British themed bonus symbol. Each of the characters triggers one of the bonus games.

The symbol labeled “bonus” triggers a feature that shares its name with the game. When the bonus symbol appears on the first, third and fifth reels after a single spin the five character features begin. In order to launch this feature, players must spin a wheel with each of the five characters on it. Whichever character it lands on determines the bonus game that is played.

The ASBO bonus requires players to choose various activities that Vicky will have to do. The amount of time it takes Vicky to decide what to do determine how many game credits players win. When speech bubbles appear during this time, players get to pick another activity and increase the amount of money they win.

Dayfdd’s Big Gay Bonus requires players to shuffle Dayfdd’s outfits so that other men will be attracted to him. When players completely put together one costume for him they win game credits.

Marjorie Dawes’s Fat Fighters requires players to choose from a screen full of silver trays. When players choose their desired trays they get to see what food is on them.The longer players spend choosing low calorie foods as opposed to high calorie foods, the longer this round will last. There is a calorie meter that quickly fills up as players choose high calorie foods. When the calorie meter is completely full this bonus feature ends and normal gameplay resumes.

The Emily Howards’ Lady Things Bonus shows players Emily’s room and has them choose objects scattered around. Feminine objects get players prizes while non-feminine objects do not.

The Lou and Andy Love It Bonus require players to choose the objects that Lou will gift to Andy. The more Andy likes the objects he receives the more game credits players earn. When a player chooses three objects Andy dislikes, the bonus game is over. 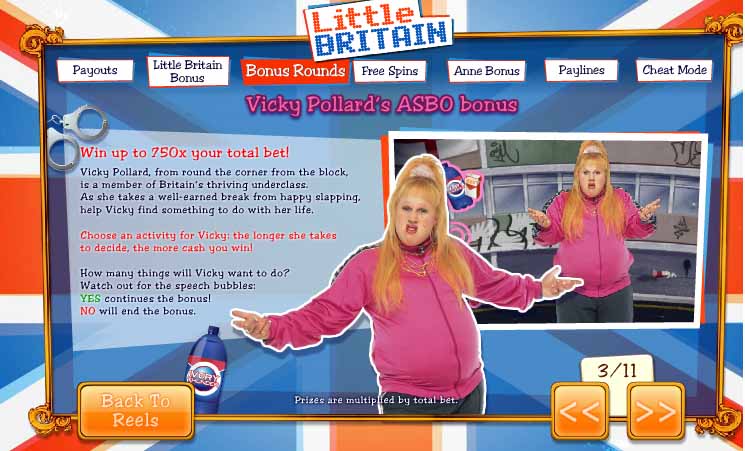 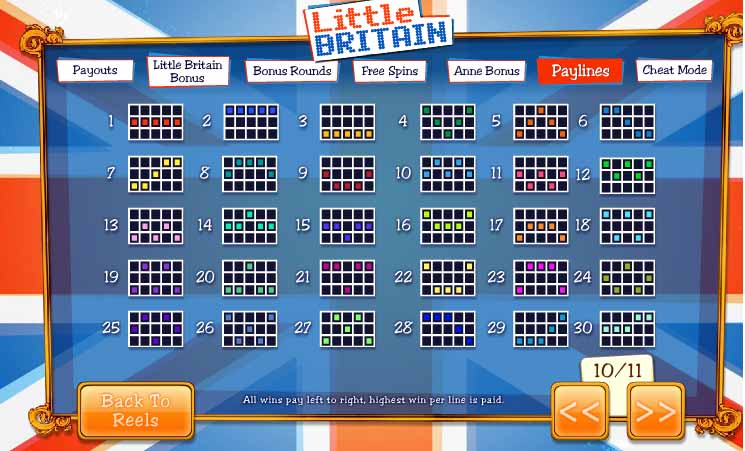 Little Britain proved to be one of the UK’s most popular comedies during the early 2000’s with many of the sketches still being referenced to fondly today. The slot game pays homage to this in fine style, and being powered by Ash Gaming, you can ensure you get a seamless end to end slot game experience.