Get ready to welcome in the Chinese New Year with this latest slot from Microgaming. Based on Chinese mythology and folklore, Lucky Little Gods invites you to meet lots of cute characters as you try to embark on a fortuitous adventure. With 3 cash prize bonus features and a free spins feature, there’s plenty to keep you occupied and a good chance you’ll win huge money. It isn’t the most unique of themes ever created, with plenty of developers choosing China as its main source of attention nowadays, but you can always expect the best from Microgaming. So take a read of our review and find out if the Gods are smiling down on you!

Upon loading Lucky Little Gods for the first time, you’ll notice a colourful, cartoon setting, and a traditional Chinese temple that sits in the clouds. Symbols on the reels include the Gods of Fortune and their apprentices, and Chinese letters. As you spin away, you will be accompanied by a peaceful, oriental soundtrack that isn’t too overpowering. Like you would expect from Microgaming, visually the slot is very appealing and will ensure it feels like you’re watching an anime.

Lucky Little Gods consists of 5 reels and an incredible 243 paylines. This amount can’t be altered and it’s quite the norm for Microgaming slots. A lot of software developers have stopped giving players this option anymore because there’s no point reducing your paylines and therefore damaging your chances of winning. It’s simple to win a prize too – simply get 3 or more symbols on consecutive reels you’ll notice your funds being topped up.

Players will have the chance to spin the reels from as little as 30p rising to an incredible £300. This means it caters for everyone, with lows-stake gamers not having to dig deep for the minimum required, and the high-rollers enjoying the maximum allowed. All bet amounts can be altered by clicking the coin symbol at the right hand side of the page where you will be able to access the bet size and value. Unfortunately there are no betting features such as Max Bet or Auto Play on this slot.

But will you be as lucky and fortuitous as the game suggests? Well, the maximum you can win on Lucky Little Gods is £30,000 during the bonus features which we will discuss shortly. In terms of the base game, if you’re playing on the maximum stake then finding 5 of the red God symbol will pay you £15,000. Other lucrative symbols include the green God which will pay £10,000, the blue God who will pay £5,000, and the pink God which will pay £2,500, if you find 5 across a payline. Try looking out for the Lucky Little Gods symbol which acts as the wild and will replace all symbols except for the scatters which will be discussed below.

Usually, a slot will only have 1 scatter symbol but Lucky Little Gods treats us with 3. These are your routes to the 3 main bonus features, and are always a good opportunity to win money. First, look out for the golden tree which will trigger the Golden Tree bonus feature when it lands on reels 1 or 5. You will then simply be awarded with a random cash prize of up to 40 times your original stake.

Next up we have the Little Gods bonus feature which is triggered randomly on any spin which isn’t a winner. You will notice a character that pops up and gives you a cash sum which is anything between 4 and 40 times your stake – which isn’t bad considering the spin was a non-winner. Lastly, out of the scatter-triggered bonuses, we have the Treasure Pot bonus and this is triggered when you find the treasure pot on reel 3. You will then have to choose a pot which will give you a cash prize between 20 and 100 times your stake.

We’re now going to move on to the Free Games feature, and many slot experts will know that this is usually the main attraction and where the biggest cash prizes can be won. This is triggered when the firecracker symbol appears on reels 3, 4 or 5 and you will get 8, 9, or 10 free spins respectively. You will also notice that reels 1 and 5 turn wild during the feature which enhances your chances of winning prizes and the £30,000 jackpot that we mentioned earlier on in the review.

We’re always going to get excited when a new slot from Microgaming is released, and thankfully we’re not disappointed by Lucky Little Gods. Even though there are plenty of Chinese-themed games on the market, they have done tremendously well to create one so unique in terms of graphics and layout. We’re also treated to instant win bonuses that liven up the base game, and who could forget the Free Games feature which explodes into life due to its ever-present wilds. If you fancy joining in with the Chinese New Year festivities then check out this great slot. We promise that you’ll absolutely love it. 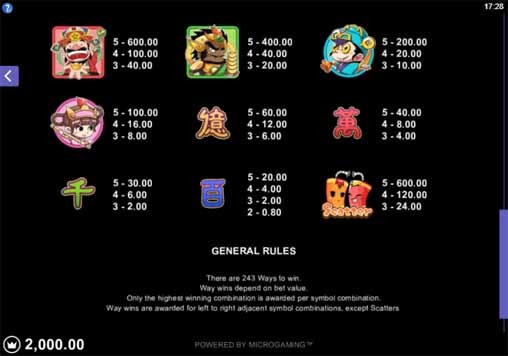