Everyone knows who the Man of Steel is – he’s the most famous superhero of them all – Superman! This slot from Playtech celebrates the most recent of the Superman movies to be released, and while the film was not seen as a success by the critics, the slot is most certainly one that every player should try to play at some point.

The game follows the same storyline as the movie, with Superman fighting to prevent General Zod from destroying all of humanity, and the two main protagonistsof the story can be found standing at either side of the reels when you play. Unlike some slots though, they are not animated, and instead stand in the same position as the reels spin around. There is also music playing over the top when you play, and it’s not actually all that bad – although, if you’re going to be playing for a while, you probably won’t be able to resist hitting the mute button.

You’ll find a whole host of recognisable symbols on the reels, including the Superman logo, Jonathan Kent, Martha Kent, Perry White and, of course, Superman himself. During the base game, Superman, General Zog and the Superman logo are all the highest paying symbols, and five of these across a payline will lead to a prize of 1000x your bet per payline. The minimum that can be bet per spin at this game is 20p, while the maximum bet amount is an absolutely staggering £2,500. This huge maximum bet should really appeal to those who like to play slots at the highest stakes. When playing at the highest stakes, the maximum that can be won per payline is an impressive £1,000,000.

Some people aren’t fans of slots with absolutely loads of bonuses features, while others can’t get enough of the action they bring. This slot is certainly one for the latter type of people, as it has absolutely loads of bonuses, and most of them are extremely exciting. The first thing to mention is that there are two different wild symbols during the base game – Superman and General Zod. Neither of them are standard wild symbols though, meaning that spinning one of them in can lead to some big prizes. When Superman spins in on the reels, he’ll move one reel to the right with every spin, while General Zod will move one reel to the left. This means that you can have the same wild symbol on the reels for up to five consecutive spins! Neither of the wild symbols have multipliers attached to them though.

These wild symbols are also the key to starting the slot’s main bonus round, which is initiated when Superman and General Zod both land on the same reel. When this happens, the Battle for Earth Free Games feature will start. During these free spins, Superman will battle three different enemies, and every time he lands next to one of them, they will fight. Each clash will then cause extra wild symbols to be added to the reels. As with the base game, all character wild symbols are shifting ones, although the symbol just stating “Wild” does not shift.The free spins end when Superman is finally defeated.

There are also more bonus features that can be activated while playing, and the first of these is the Krypton Free Games bonus. This starts when the Krypton Bonus symbol lands anywhere on the fifth reel. You will then get seven free spins on a special set of reels, which have more paylines than the base game. What’s more, up to ten Jor-El symbols will lock in place before the spins start, and these act as wild symbols. They will remain in place for the duration of the free spins. Free spins can be retriggered in this bonus.

The World Engine Bonus starts when you get the Bonus symbol anywhere on the fifth reel, and this will unleash a huge blast over the reels. This blast will then cause up to seven wild symbols to appear on the reels, which can lead to some really big wins. This is probably the least exciting of all the bonus features found at Man of Steel though.

Man of Steel is a slot not only for those who love the Superman franchise, but also for those who really enjoy slots with loads of different bonuses. What’s more, it is also a fantastic choice for those looking to win some really big prizes, as the base game jackpot of £1,000,000 is a rather impressive one. Playtech is a company known for producing some of the best online slots around, and Man of Steel is definitely one of their best in recent years. 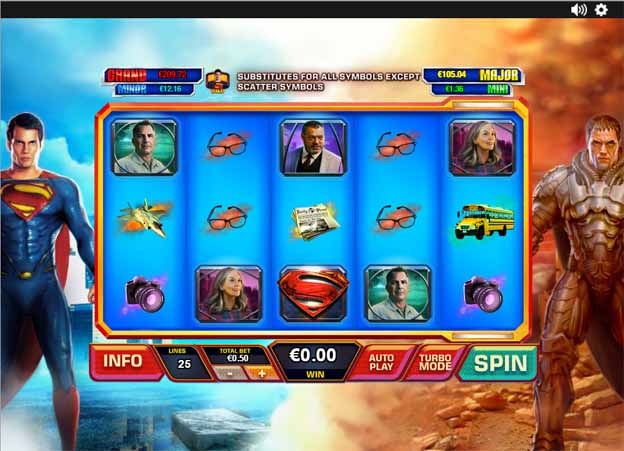 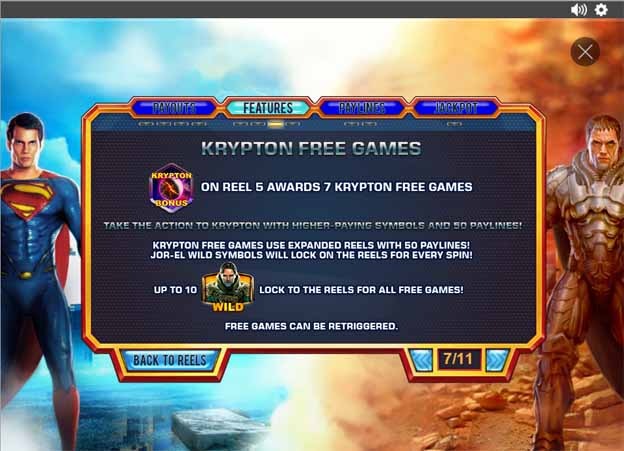 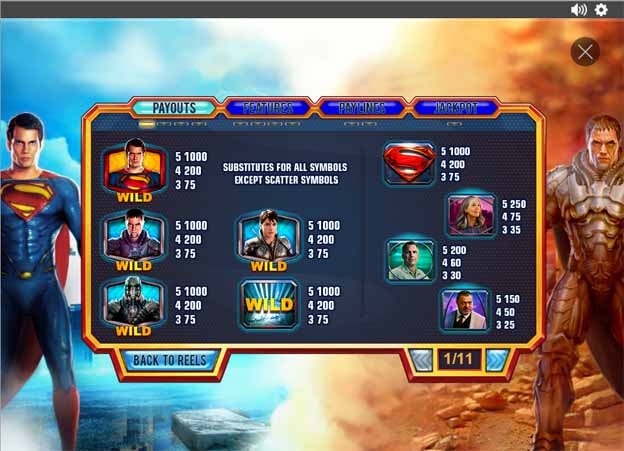