The fictional city of Atlantis is a favorite subject of many people. As a result, Blueprint Gaming released the video slot machine Master of Atlantis. It’s a nod to Greek mythology and is meant for those who enjoy it.

A far off Parthenon and waterlogged ruins set the scene for the underwater adventure of Master of Atlantis. Players will see water plants and other greenery in the background. As they wade through the water, they leave players with a tranquil feeling. However, the game quickly picks up speed when the reels start spinning.

Play Master of Atlantis for free

The reels are filled with things found in deep waters. This includes sharks, pearls, krakens and a treasure chest. The game’s most valuable symbol is its logo. In this game, it is a permanently stacked symbol. Not surprisingly, Poseidon, a God in Greek mythology, is the game’s scatter symbol. Its wild symbol has a golden omega that is carved into a stone tile dating back to ancient days.

Poseidon is always seen holding his trusty trident. However, he occasionally loosens his hold on it. When he does, it will be on a random spin of the reels. Some of the symbols on those reels then become mystery symbols. The game’s most common symbols then appear. Players will never see a symbol become a scatter or wild when this happens. The luckiest players may get mystery symbols in every position on the reels. When this happens, players win a significant cash prize.

Free spins are referred to as power spins in Master of Atlantis. When players get Poseidon on the reels between three and five times in one spin, this bonus is triggered. The more scatter symbols a player gets the more Trident Power Spins they get.

Triggering the bonus feature brings up a second set of reels. This is the set up for the Trident Power Spins to be played. Anywhere from five to 20 scatters during the Trident bonus activates these spins. Players may win as much as 100 times the amount of money they just bet. If players get 10 of the Trident scatters they win 10 times the amount they would have otherwise.After this has completed, players are returned to the standard game screen. The free spins are then played out. During free spins, if Poseidon lands on the reels, players get to choose a treasure chest. They have four to choose from and when they click on one, they will get another Trident Power Spin or a regular free spin. If scatters appear during this time, players win even more free spins. 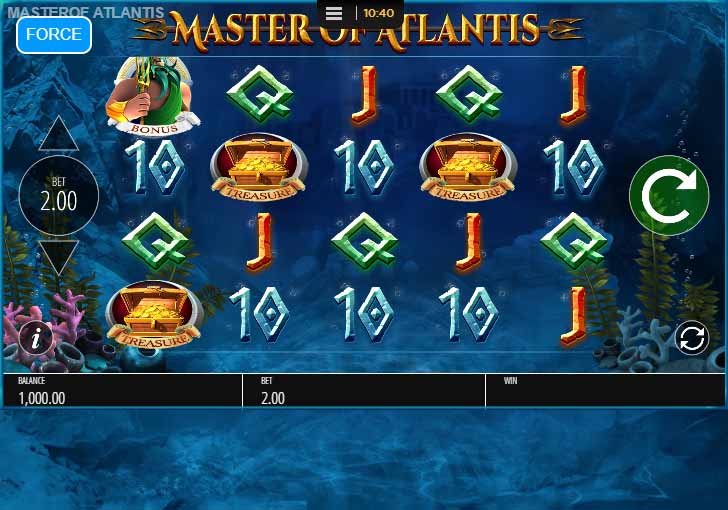 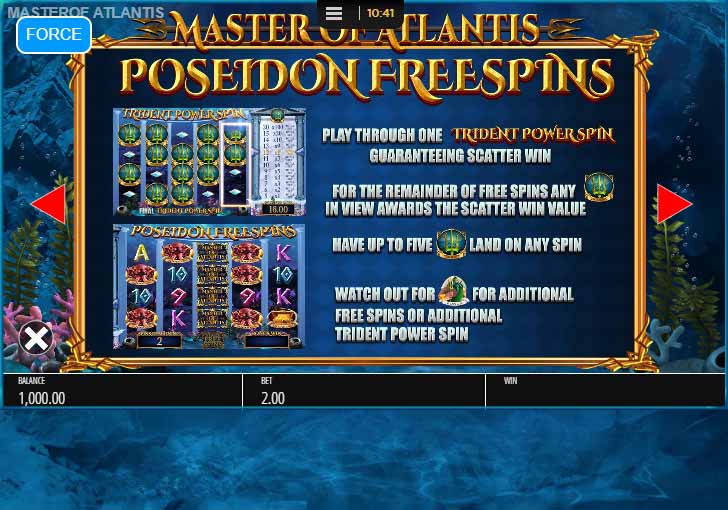 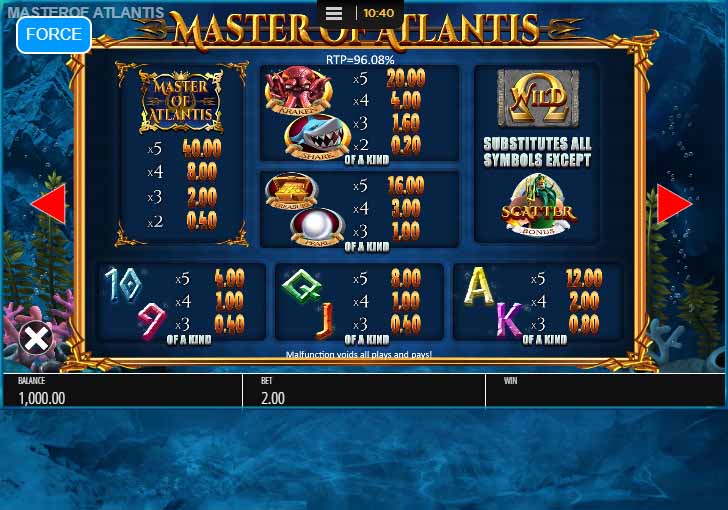 Whether players enjoy Greek mythology or not, Master of Atlantis has something to offer them. The game is involved enough to be exciting without being too complicated. It is perfect for players who want to inject some adrenaline into their lives. The game is not only fun to watch, but also boasts a soundtrack that helps players immerse themselves.