You may be able to remember a popular slot game that was released a few years ago called Merlin’s Millions. Well, now the creators NextGen have done it again with a sequel called Merlin’s Magic Respins. Like before, it focuses on King Arthur’s magical sidekick and you’ll have the opportunity to win plenty of cash just in time for Christmas!

As you may be able to guess from the name of the game, there are plenty of exciting bonus features and free spins that will get you in the festive spirit and it also comes with tons of stacked Wilds. It looks similar to its predecessor in terms of graphics and visuals, but the features set it apart massively and it’s definitely a good thing. If you don’t believe the magic that goes on in this game then you will once you’ve taken a read of our detailed review!

Upon loading the game for the first time, you will notice incredible graphics of Merlin’s chamber with the wizard himself forming the background to the reels. Symbols that will help you to win prizes include a telescope, a book of spells, parchment, and a goblet full of magic potion. As well as their incredible graphics, NextGen are also known for their superior sound effects and this is evident with a joyful and lively jingle as you spin away. There’s a great, magical atmosphere to the game and one which is a true delight to play.

Merlin’s Magic Respins consists of 5 reels and 50 paylines which cannot be altered. Most software developers don’t give the option to lower the paylines these days anyway as players have cottoned on that doing so will only damage their chances of winning. If the bet total seems too much then simply lower the amount of coins using the arrows either side. 50 paylines also seems like the perfect amount to provide enough excitement without it becoming too confusing.

Players will be able to bet as little as 0.50p and as much as £100 per spin which means that it will cater for 99% of the gaming population. The minimum may seem a little higher than low-stake players would prefer, and £100 may be a tad too low for the super high-rollers but there’s still a good range here to work with. It is also possible to use the Autoplay feature in which you can set a number of spins up to 100 so you can just sit back and watch the cash roll in.

This brings us nicely onto how much you can actually win on Merlin’s Magical Respins. Obviously the cards ranging from 10 to Ace are the lower paid symbols but you can still win between 5 and 100 times your original stake. The higher paid symbols is the parchment, the telescope, the chalice and the book of spells and all winning combinations consists of 3, 4 or 5 symbols on a line. The most you can win is an incredible 500 times your original bet.

Now we’re going to discuss how to win the most amounts of money, and like most games, this is done through the bonus features. You need to be looking out for the Wild symbol which consists of Merlin himself and he will substitute for all other symbols except for the Scatter which is cauldron and can appear stacked and fill the whole reel – giving you an incredible payout!

One interesting element about the game is the SuperBet feature where you can bet an extra amount of coins – the minimum bet being £3.50 – and if you trigger the Wild Respins then you’ll be rewarded between 1 and 5 respins depending on how much you have wagered. The minimum 50 coins will give you 1 respin and 100 coins will give you two, and so on up to 500.

We have mentioned the scatter symbol briefly earlier and you will be able to trigger the Free Games feature if you find 3 anywhere on the reels – awarding you with 7 free spins! When this happens, Merlin will fire his magic wand onto the reels and turn symbols into Wilds. The feature can be retriggered to earn lots more Free Games and the Wild Respins can also happen during this feature.

Finally, one other thing we should mention is the Gamble feature which can be clicked after any win. This gives you the chance to either double your winnings or lose it all and this is determined by whether you can correctly guess whether the next card drawn is black or red. This is a great feature but be careful as all your hard work can be undone in a matter of seconds.

Merlin’s Magical Respins really doesn’t fail to live up to its name and manages to offer plenty of free spins through their range of bonus features. If you can get the stacked Wilds then you’ll definitely receive some monster payouts that will make playing the game worthwhile. Even if you are unlucky and don’t manage to win anything, the graphics and animations ensure you won’t be feeling too disappointed anyway. 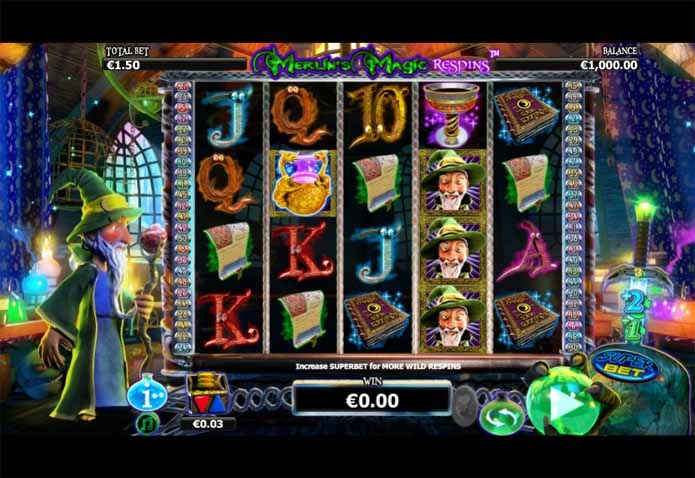 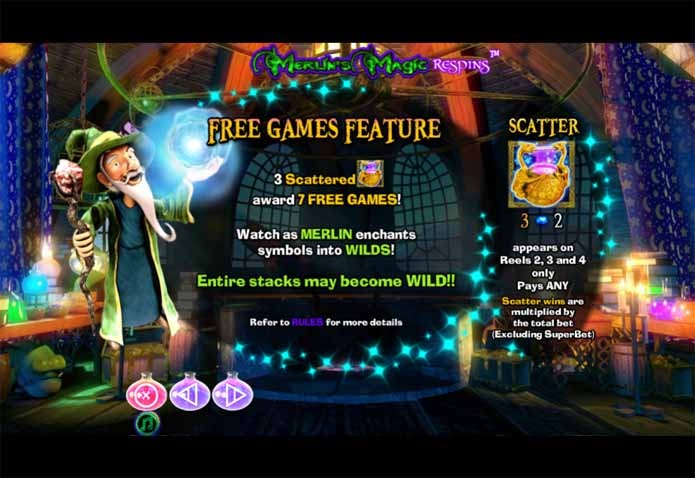