Originating from Greek Mythology, mermaids have been depicted in many different guises over the years and their popularity doesn’t seem to wane. Perhaps Play ‘N Go’s reasoning for creating an innovative online slot game, centred round these flamboyant creatures that were once rumoured to have graciously trawled the oceans of the world, is the fact that nobody seems to get bored of mermaids!

Unsurprisingly, Mermaid’s Diamond is set in the depths of the sea, creating an appealing visual for online gamblers in search of underwater treasure. The elegant graphical representation is well accompanied by a rather serious, orchestral soundtrack that sets the tranquil mood perfectly. Uniquely, Mermaid’s Diamond is played on a hexagonal reel set and with the array of bright colours on display the game instantly looks very attractive.

The hexagonal reel in Mermaid’s Diamond has 5 reels and its different composition enhances the gameplay – presenting players with a remarkable 720 ways to win per spin. Underwater creatures, shells and gems dominate the base game – with the playing symbols in keeping with the oceanic theme. As with most slots, matching a minimum of 3 identical symbols on any given pay line will be enough to secure a win. The diamond is the most valuable combination reel win – giving you 10 times your stake for 5 across a pay line.

Mermaid’s Diamond is a medium variance slot that offers an average pay out percentage of 94.45% – which is relative to many of its direct market competitors. The minimum bet is 0.2 coins ranging to a rather large maximum bet of 100 coins, meaning Mermaid’s Diamond may appeal a little more to higher denomination players rather than those scouring the ocean for loose change.

With Mermaid’s Diamond being the first hexagonal reel game from Play ‘N Go, the innovations within the game make it a unique game playing experience for online casino players. The significance of the magical mermaid comes to the fore more so in the base game, with the red-haired mermaid representing the ‘wild’ feature within the game and she will substitute for all symbols within the reels to form lucrative winning combinations – outside of the bonus features – meaning you’ll definitely want to see mermaids on the reels. Thankfully, the mermaid appears often, sometimes even dramatically, to cover one symbol or the whole reel, giving you unexpected yet welcome wins.

One of the huge selling points for Mermaid’s Diamond is the incredible bonus features that make the ocean treasure attainable for all players. As mentioned, the pretty mermaid is the’ wild’, and she completes any winning combination when other symbols are adjacent to it, except for the scatter, which is represented by a treasure chest symbol.

The Treasure Chest can appear stacked on all reels and landing 5 of these on any of the reels will trigger up to 25 free spins. Selecting one of the treasure chests reveals the number of Free Spins awarded. If a player hits 3, 4 or 5 scatter symbols during their free spins, the award of an additional 10, 15 or 25 more free spins will be triggered. In addition, shining diamonds appear throughout free spins and if a player manages to collect all 5 of them, they will trigger the Trident Wilds feature, which sees one or two extra wilds added to the reels, therefore improving your chances of spinning in a win considerably.

There is also a Divine Intervention feature which can be activated on a non-winning spin when 4 treasure chests appear on the reels and once triggered, the elusive 5th scatter symbol appears which will in turn trigger the free spins feature.

The unlimited amount of free spins offered is a nice touch offered by Play N Go and makes Mermaid’s Diamond an enticing proposition for those who like to see their money well used in online slot games.

Where better to search for treasure than at the bottom of the ocean, with a glamourous mermaid for company – what can go wrong?

Mermaid’s Diamond is innovative in its composition and graphical representation yet still has a very classic and simple feel – offering a huge amount for players of all levels. With a staggering 720 pay lines as well as an unlimited amount of free spins tied in with easy to utilise bonus features – Mermaid’s Diamond is a real gem of a game. Lower denomination players may find riches harder to come by at the bottom of the sea but the amazing graphics and apt soundtrack set the scene brilliantly and for those looking for an adventure, Mermaid’s Diamond offers a fantastic online gambling experience.

So, does this online slot seem like the perfect game for you? If so, why not delve in to the depths of the ocean with Mermaid’s Diamond online slot and spin the reels today with Play N Go online casinos…? 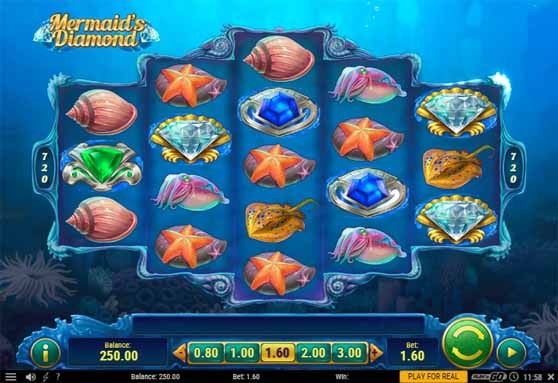