It doesn’t take a genius to work out who this slot is based on. Yes, that’s right, the most popular musician of recent times is now the subject of an online slot, created by Bally Technologies, and it has all of the excitement you’d expect from a game bearing his name. Even if you’re not a fan of Jacko’s music, you’ll still really enjoy every spin of the reels at this slot – especially if you manage to spin in the jackpot, which is worth an impressive amount of money.

The look of the game is fantastic, eliciting memories of one of Michael Jackson’s spectacular stage shows.Symbols including his hat, sunglasses and, of course, the King of Pop himself spin around on the reels, and there’s also a great soundtrack, featuring some of Michael Jackson’s biggest ever hits, including Beat It and Billie Jean. During the bonus games, you could also see videos of the great man in action.

There are 25 different paylines spread over the five reels at this slot, and they are fixed, meaning that you have to play them all on every spin. You can alter the amount you bet per payline though, with the maximum bet amount being a massive 320 coins. After you’ve decided how much to bet, it’s then simply a case of spinning the reels and waiting to see what you can win!

The wild symbol at Michael Jackson King of Pop is pretty easy to identify, and it is a standard wild symbol, with no multipliers or other special features attached to it. There are then no less than five different bonus rounds to talk about, with the first three being activated by spinning in three Bonus symbols anywhere on the second, third and fourth reels. When this happens, you’ll spin a wheel, and will win one of the bonuses.

The first possible bonus on the wheel is the Smooth Criminal bonus, which gives you five free games, during which one or two reels are completely wild on each spin. Then there’s the Beat It free games bonus, which sees you given 10 free spins, and during these Michael Jackson can appear on the reels and turn symbols wild. These wild symbols then remain in place for the rest of the free spins. The final of the three bonuses gained from spinning the reel is the Pile Up bonus, which happens when you receive a cash win on the wheel. You’ll spin a second wheel to reveal a multiplier, which is then applied to the amount you’ve won on the first reel.

There are also two bonuses that can happen completely randomly when you play. The first sees Michael Jackson moonwalking over the reels, turning symbols wild as he goes, and these wilds have a 2x multiplier attached to them. The other sees two reels turned completely wild, while Bad is played in the background. If during either of these random bonuses a jackpot or a bonus symbol is replaced, the symbol will be both wild and a jackpot/bonus symbol.

Michael Jackson King of Pop has to be regarded as one of the best slots ever created. It manages to mix exciting music and graphics with fantastic gameplay, and the prizes are also pretty decent. Even those who aren’t fans of the King of Pop should really enjoy playing this slot from Bally Technologies. 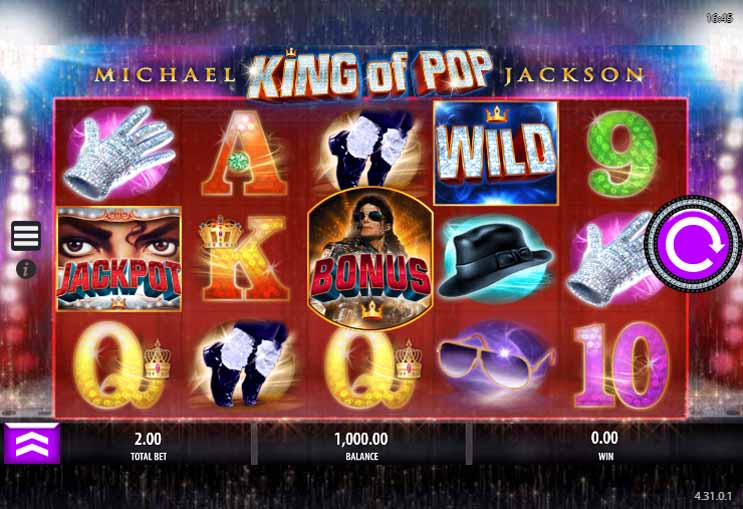 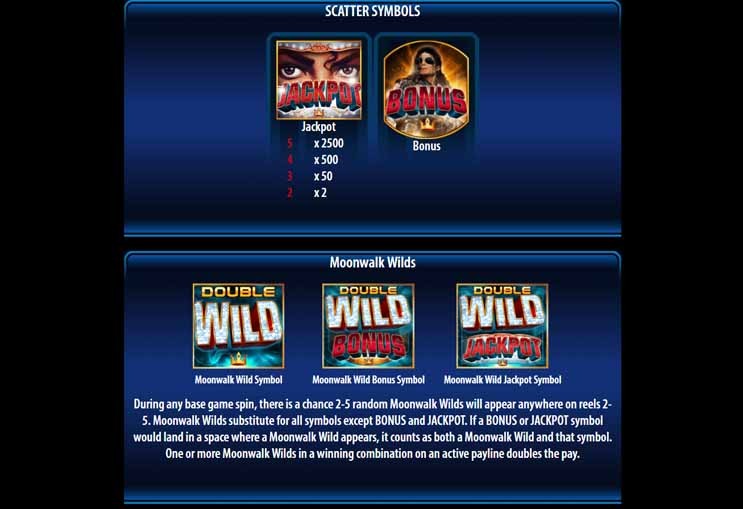 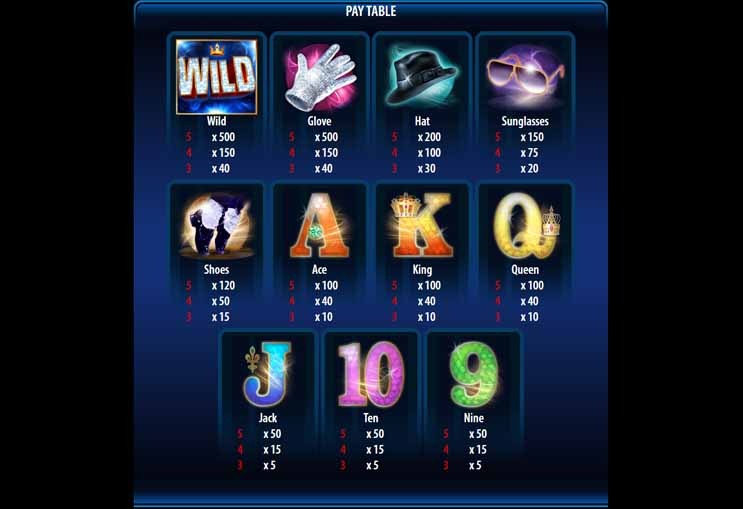