The legend of King Arthur has inspired a long list of slot games, with Mighty Arthur being the latest addition from Quickspin. The fantasy-themed slot has 5-reels and 20-paylines and features Expanding Wilds and Random Wilds during the base game as well as the bonus game. There is also a free spins bonus feature, which awards a maximum of 10 free games. If you want more details about the Mighty Arthur Slot, read our full review below.

Mighty Arthur has exquisite graphics and an epic fantasy soundtrack. The gameplay is familiar from other releases from Quickspin and you’ll notice it’s non-complicated and intuitive.

The game can be played with 20 fixed paylines and you can wager a minimum of 0.20 up to a maximum of 100.00 of your currency. Mighty Arthur is available on all mainstream devices – so you can enjoy it on your desktop, tablet, and mobile. You also have the option to test the game in free mode.

The low-value symbols include the 10, J, Q, K, and A. Higher value symbols feature goblets, helmets, grimoires, a knight, and a beautiful princess. We assume the knight is King Arthur’s loyal friend Lancelot and the princess must be Lady Guinevere. She is the best paying symbol along with the standard Wild, offering up to 7.5 times your bet for 5 of a kind.

Mighty Arthur Slot has a return to player percentage (RTR) of 96%.

Mighty Arthur has two different kinds of Wild Symbols – the regular Wild and the Arthur and Merlin Wilds. The standard one substitutes for all symbols except the bonus Scatter and the special Wilds. The Arthur Wild is a 3×1 symbol present both in the base game and free spins game. It appears only on reel 3 and expands to adjacent reels making them wild. The Merlin Wild is also a 3×1 symbol and it could appear on any of the reels during the base game or free spins. The sorcerer Merlin generates between 2 and 6 additional regular Wilds, which are then placed randomly on the reels.

The bonus Scatter is a golden crown with the word bonus written under it. When you get 3 or more Scatters anywhere on reels 1, 3, and 5 the free spins bonus will be triggered. You will be awarded 10 free spins, which, unfortunately, cannot be re-triggered, as the Scatter does not appear during the free spins games. That being said, you can still get more than decent payouts thanks to the Expanding Wilds and the Random Wilds.

Mighty Arthur’s gameplay is pretty standard and not as imaginative as we would expect from a fantasy slot, but there are some massive rewards to be won. Look out for the Arthur and Merlin Wilds, they definitely spice up the base game. The slot isn’t anything sophisticated, but we would definitely recommend it to the fantasy fans. After all, it’s hard to say no to a little adventure and magic. 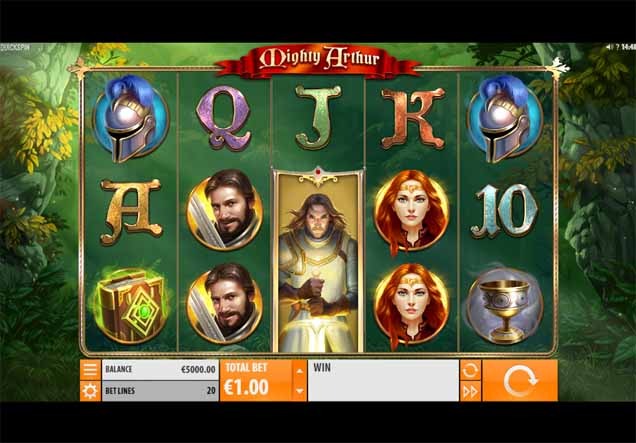 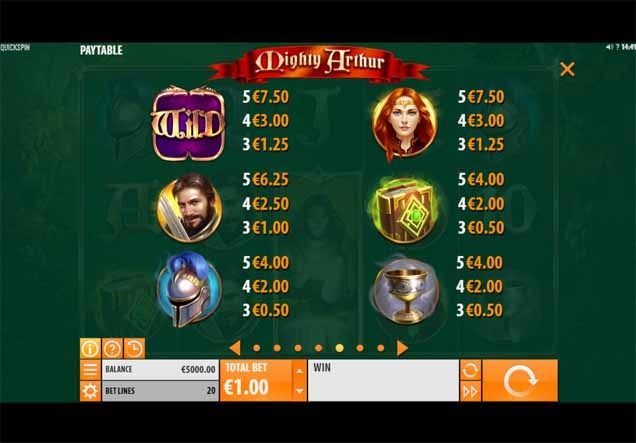