One of the world’s most popular board games comes to life again with new slot Monopoly Mega Movers. You may think you’ve seen it all when it comes to titles based on the series but you’ll no doubt be pleasantly surprised with this latest offering. WMS are the creators this time around and there’s plenty to keep you entertained, with spreading wilds and a wheel bonus feature the main attractions. There are also an incredible 5 jackpots to be won which can result in humongous cash prizes. Make sure you read our comprehensive review to find out whether this is the best version of a game which traces its roots back to the early 20th century!

Visually, Monopoly Mega Movers doesn’t really offer anything different to what you would expect in a slot from this series. There’s a simple, plain blue background and the symbols will be very familiar to fans of the board game – they include the car, train, hat, battleship, duck, cat, dog, t-rex and penguin. There’s also Mr Monopoly himself but we will discuss him a bit later on. There’s a funky, chilled soundtrack that plays while you spin the reels too, and thankfully it isn’t too intense like some other slots.

Monopoly Mega Movers consists of 5 reels and 30 paylines which cannot be altered. It seems like a common trend for software developers to not allow gamers to change how many paylines are active and it’s because reducing them will only damage your chances of winning. And what would be the point in that? With all our experience playing slots we have also come to the conclusion that 30 paylines a great amount if you want to enjoy the game without getting distracted by one which has hundreds of paylines.

It’s quite evident that Monopoly Mega Movers is not for the high-rollers of the industry because you can only place bets between 50p and £75. It’s unusual for a slot to reduce their customers dramatically this way because low-stake gamers may not want to cough up the minimum required, while the high-rollers will definitely turn their nose up at the maximum offered. On top of your original stake, there’s a chance to use the bonus bet which will give you more free spins and random wilds from the wheel feature which we will discuss later on.

Monopoly has always been a game focused on money, but how much can you actually win on this slot? Well, there are 5 jackpots to be won with the grand jackpot awarding an incredible 2000 times your original stake! In terms of the base game though, try looking out for the Mr Monopoly symbol which will reward you with 250 coins if you manage to find 5 on a payline. Other high paying symbols include the t-rex and the penguin which will both award you with 100 coins.

The wild symbol is useful to find on the reels as it will substitute for all the other symbols but can only be found on reels 2, 3 and 4. Find 5 of these on a payline and you will win 250 coins, and if it appears with 1 or more arrows, then it will expand by one position in the same direction the arrow is pointing. There’s also a weird background symbol which is similar to that behind the reels, and if 3 or more appear on adjacent reels of the same row, you will trigger the Wheel Bonus feature.

The Wheel Bonus feature consists of 3 wheels and you only get one spin, but which wheel you use depends on how many background symbols you found to trigger the feature. Obviously, the more symbols you found will give you access to better prizes but some of these include 1 spin of the Wild Spin feature (see below), entry on to the Free Spins feature (see below), and the opportunity to land any of the jackpots.

If you gain access to the Wild Spin feature then a few wilds are added to the reels and we all know that this will increase your chances of winning nice prizes. If you manage to get on to the Free Spins feature then the number of spins awarded will depend on which wheel you used to access the round. You can get between 5 and 50 free spins in total and a different set of reels is used with the background symbol available. You can also trigger the Wheel Bonus again which could lead to even more cash prizes.

Even though video slots in the Monopoly franchise have probably been released all too often, we’re happy to say that Monopoly Mega Movers could be the best one yet. There’s plenty of fun to be had and who can complain with 5 fixed jackpots that could earn you 2000 times your stake? The base game is pretty straight forward to play but there’s interesting features too that will keep you entertained. You may think you have seen it all in terms of Monopoly, but don’t be too sure until you’ve played this great slot from WMS. 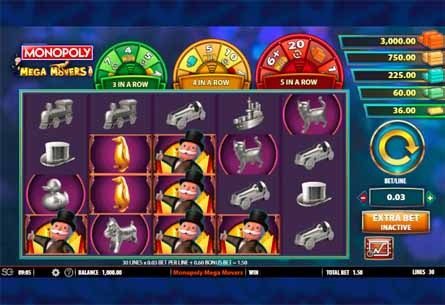 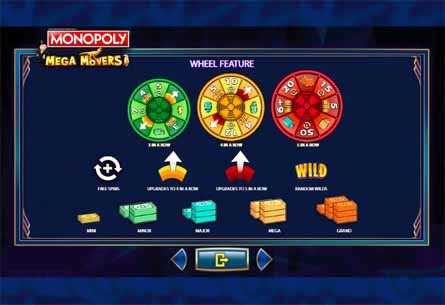