Monopoly on the Money

Everybody is familiar with Monopoly and even though there are plenty of variations in terms of slots, Barcrest have managed to create a unique interpretation of the popular board game. Monopoly on the Money is refreshingly simple but at the same time manages to offer plenty of bonus features that distinguish it from the other titles in the series. Not only this, but this entertaining slot also has many different ways to win big money, including the legendary Big Bet mode which gives you an enhanced RTP of 97.75%. So are you ready to play this latest release of the world-famous game? Read our review to find out if it’s perfect for you!

You won’t be blown away by the graphics on Monopoly on the Money when loading it up for the first time. However, you may be impressed with the simple, yet classy design that allows you to focus purely on winning cash instead of getting distracted by the visuals. This has the feel of a proper slot and purists will appreciate the golden-red reels that sit in front of a plain grey background. Symbols that are going to win you money include small, medium and large stacks of cash, as well as Monopoly game pieces including a dog, cat and hat. There’s a funky soundtrack that plays when you spin the reels too which isn’t too overpowering like some other slots.

Monopoly on the Money consists of 5 reels and only 10 paylines which cannot be altered. Some gamblers may not be too impressed with this amount but you’ll realise the entertainment value isn’t sacrificed when you read the rest of the review. Obviously IGT haven’t included the opportunity to lower these paylines either because you really don’t want to be playing with any less than what you have already.

There’s an opportunity to spin from as little as 10p or as much as £500 which means it will cater for most players. All the casual gamers will find it easy to cough up the minimum required while high-rollers will be happy with the maximum they can bet. If you want to alter your bet size then you can do so by clicking on the arrows either side of your total amount.

Now we’re going to discuss the moment you’ve been waiting for. Just how much can you win on Monopoly on the Money? Well, one thing you need to note is the higher your bet, the more you will win. Players who bet less than £2 will have a 94.1% RTP, while players who bet over this amount will have a 96.1% RTP. If you use the Big Bet mode then it will go up to 98.1% RTP but we will talk more about that later on. In terms of high paying symbols, you need to be looking out for the Monopoly Money symbol which will give you 200x your original stake for 5 on a payline and the hat which will give you 100x.

There are plenty of bonus features that will keep you occupied while you play Monopoly on the Money. As with all good slots, there is a Free Spins feature which is played when you get 3 or more Scatter symbols (the GO symbol) anywhere on the reels. 5 will give you 50 free spins, 4 will give you 20, and 3 will give you 8. You will also be given the choice to gamble your free spins to gain more if you wish!

As with a lot of Barcrest slots, you will have the opportunity to use the Big Bet feature which is a series of 5 spins on the bounce for a higher stake. These bet sizes come in four groups: £20, £30, £40 and £50 and the value of symbols will go up dramatically while using this feature so the playing cards will be worth 20x your stake for 5 on a payline and the cash stack symbol will pay out 40x your original stake. Look out for the hat too which will pay out 200x your stake. This may sound good but there’s actually a symbol that pays out more than this and it’s the one which has Monopoly on the Money written on it. Finding 5 of these on a payline will pay out an incredible 400x your original stake!

If you decide to play with £50 then you will be eligible for 5 linked spins with Scatters acting as Wilds. The reels will be extended by 2 positions for bigger wins and if you land 2 scatters, you will trigger the Red Hot respin feature which you can spin again in order to try and find another Scatter. Be prepared because the most you can win on this feature is an incredible 500x your original stake.

Barcrest have managed to create a really simple game that manages to offer lots of engaging features at the same time. It really is worth checking out the Big Bet mode if you can afford too due to its ability to offer huge payouts and higher valued symbols. The feature may seem a little complicated at first but we advise to play the slot for free before committing any real money to get a real feel for how it works. Even if you hate Monopoly, you need to give this game some love and attention as it has the ability to offer great entertainment. 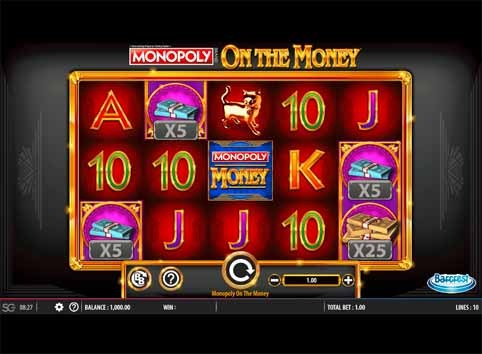 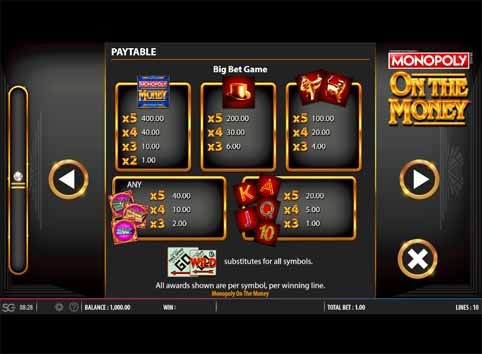