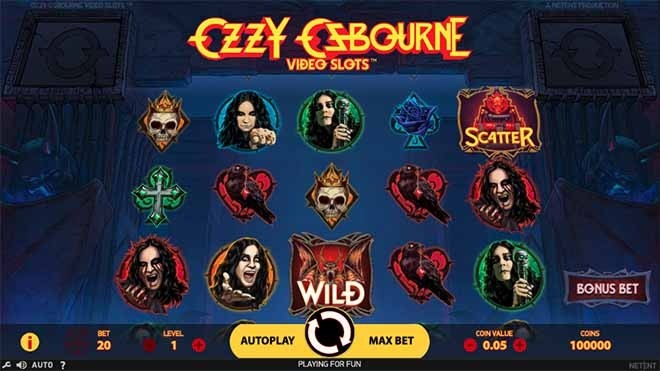 Based on the Prince of Darkness himself, the Ozzy Osbourne online slot machine game reflects its inspiration perfectly. The game has dark undertones that any fan of Ozzy’s will immediately recognize.

The background of the game screen is dark blue, in keeping with the overall tone of the game. It implies that the game takes place in Hell, with the devil depicted on both sides of the reels.

Ozzy’s face serves as more than one symbol in the game, one each in yellow, blue, green, and red. Other symbols include a skull, a crucifix and a rose. A red iron man symbol serves as the scatter in the game. All regular symbols can become stacked at times.

The multipliers automatically increase a player’s winnings. They normally double or triple the amount of cash winnings a player gets. But if they choose to buy the bonus bet, the multiplier is worth five times or seven times as opposed to two or three times. In the case of an upgrade, the symbols on the reels will change into whichever symbol ranks directly above the one that appears in the single tile reel.

However, those aren’t the only bonuses in the game. When players get the scatter symbol on the first, third, and fifth reels at once it triggers free spins. Free spins include the Symbol Charge Up activating for each one. Symbol Charge Ups become sticky symbols on the reels.

During free spins, the scatter symbol on the game’s left reel gets players one additional spin for free. Four or even five symbols may get upgraded which leave players with the coveted multipliers. 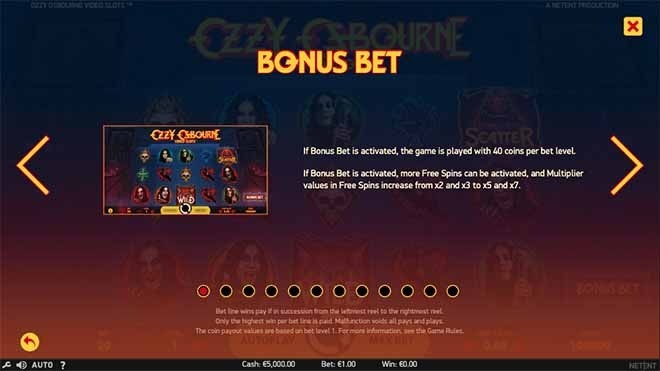 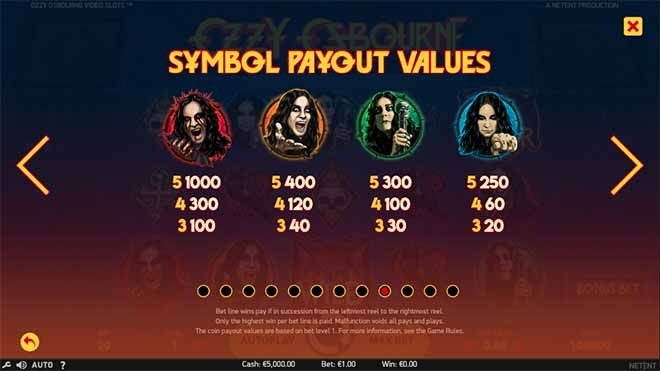 This online slot serves to keep Ozzy’s music alive. During gameplay, select songs are heard, though players can’t choose which one. In addition, anytime a winning combination of symbols is achieved, guitar chords play to help players celebrate. The bigger the win is, the longer the guitar riff is heard.

With fun bonuses, players don’t have to be fans of Ozzy Osbourne in order to enjoy this game. It is exciting and spine tingling for players of all ages.