Pirates have become a popular theme in pop culture, thanks in part to movies like the Pirates of The Caribbean franchise. As a result, it is also a commonly used theme in video slot machine games. This includes Pirates Plenty: Battle For Gold.

The action of the game is set on board a pirate ship. It includes a detailed view of a room on the ship, which contains a treasure chest and a floor covered in coins. Above the reels lies a map designed to lead its reader to the treasures they are seeking.

The symbols on the reels include a pirate’s hat, skull & bones, bottles of whiskey, cannons and guns. A monkey serves as one wild symbol, while the other is a special symbol that sometimes acts as a multiplier. The scatter symbol in the game is meant to represent the battle between pirates. Of all these symbols, the standard symbol with the highest value is the skull & bones.

An important symbol in this game is the map. When players get this symbol on the reels, they are able to move one space on the map. Players are traveling on the pirate ship and when it arrives at a red x on the map, they get one extra reel on the game screen.This extra reel then stays on the screen for the rest of a player’s session.

Also, during regular gameplay, the wild symbol eliminates the lowest paying symbols on the reels. When this happens, players do get a re-spin for free. However, the standard monkey wild symbol is not used in the bonus features.

The game’s free spin bonus feature is triggered when three of the battle spins scatter symbols land on the reels at once. This gives players nine spins of the reels for free. There is a special fire symbol that only appears during this bonus.

The fire symbol on the reels sets off cannons. When the cannons hit a symbol on the reels, it is automatically turned into a wild. Symbols may also become wilds when Captain Blackbeard aims wild bombs to hit the reels. All wilds that are created during free spins become sticky wilds They remain this way until all the free spins have been played. 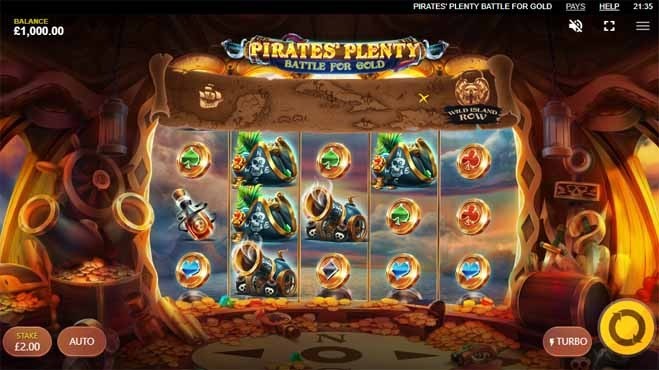 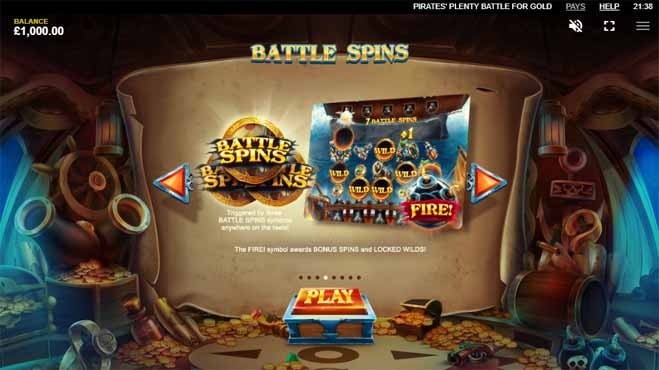 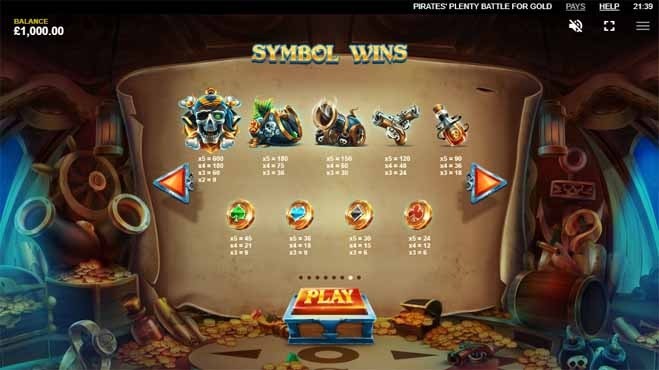 With some distinct bonus features and extras, Pirates Plenty: Battle For Gold, is a game that appeals to many players. The graphics are presented in a way that make the game fun to watch. Players always have something to look forward to in this game. As players progress through it, they will have an interactive exoerience they won’t forget.

New customers only. 1 Free Spin for every £1 of first deposit up to 50, available on selected games only. First deposit only. 3-day expiry on Free Spins. No Neteller/Skrill.