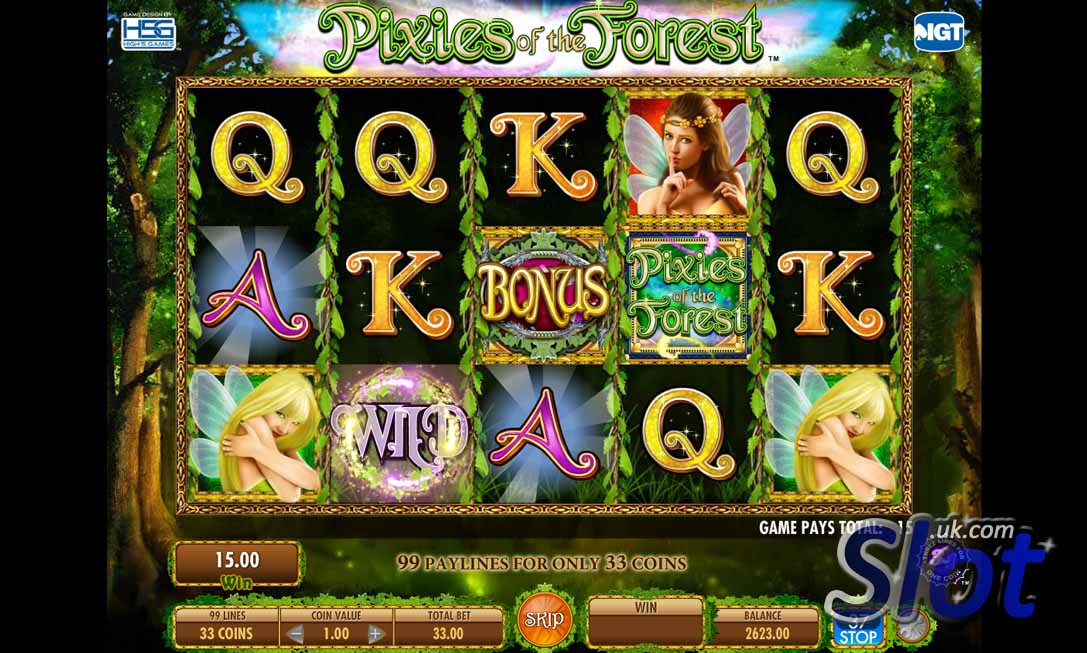 IGT had such a hit with the Pixies of the Forest that the company released its sequel. It is set in a magical forest, just as the first one was. The pixies are back to keep entertaining players.

The game’s background is an elaborate magical forest. It is accompanied by a soundtrack that adds to the ambience. The reels are filled with images of purple, blonde and brown haired pixies. The Pixie of the Forest II logo is the highest value symbol. The bonus symbol in the game is the Pixie Queen. There is also a smaller pixie that represents the jackpot symbol.

When three of the small pixie jackpot symbols appear on the reels at the back, the bonus game is triggered. This is the feature wild spins, which adds more wilds to the reels during the round. The wilds turn regular symbols into bonus symbols. As a result, players get a chance to experience the jackpot bonus. They may instead trigger the Pixie Queen’s free spins.

The Pixie Queen free spins round takes players to a new screen. They will see many pixies and have to decide which one to click on. They then win at least five free spins but can win as many as 11. Once these free spins have been played they can’t be retriggered. During the free spins, if a pixie shows up on the reels, it becomes a wild with a double multiplier. If players get lucky, the Pixie Queen will prolong the length of time this bonus feature lasts.

Feature wilds are also something for players to look forward to. On the lower part of the game screen players will see the Spirit Meter. It works in conjunction with the tumbling reels. The tumbling reels feature can increase a player’s winnings. When a winning combination is achieved, the symbols disappear and more symbols tumble down. This keeps happening until the first time the symbols drop and a winning combination isn’t formed.

Every consecutive tumble of the reels that create a winning combination adds to the Spirit Meter. It takes five instances of continuous winning combinations to fill it. After only three, players get free spins. During this feature players will see a trio of wild patterns on the reels that they normally wouldn’t see. The wild patterns are wild reels, random wilds and Countdown Sticky Wilds. During wild reels, those in the middle of the screen are stacked wilds.

Random wilds add three wild symbols to the three reels in the middle. After the reels tumble if no winning combination is achieved random wilds may be added to the reels twice more.

Countdown sticky wilds are randomly added to the reels. They go on the three reels in the middle and become locked into place. Then the reels tumble three times. After this has been completed, the bonus is finished and normal gameplay resumes. Players are on a constant quest to trigger these bonuses again.

Pixies of the Forest II Screenshots