For many, pollen can be a huge irritation during the summer months, however online casino players should find nothing irritating about this new online slot from Microgaming, one of the world’s biggest online casino software companies. Because this game is by Microgaming, you can already be pretty sure that it will be fantastic, but is it as good as some of the other titles released by this company? You’ll find out when you read through this comprehensive Pollen Party slot review, which will let you know everything you need to know about this new game, including details about the gameplay, prizes and bonuses.

The first thing you’ll notice about this slot is the reels, as they really don’t look anything like the standard reels found at most other online slot machines. Like many slots, there are five reels, however they differ in height, with the first and fifth reels having three symbols, the second and fourth reels having four symbols, and the fifth reel having a massive five symbols on it. When these reels are combined, they create a massive 720 different ways for you to win when you spin, which is more than most other online slots out there.

But how does Pollen Party manage to have 720 different ways to win? Well, it’s because there aren’t actually any paylines. Instead, you simply have to get three or more identical symbols on adjacent reels, starting from the first reel. The fact that some of the reels are absolutely huge also helps to create the 720 paylines. Regardless of the way in which the 720 paylines is made possible though, it certainly adds a massive amount of extra excitement to every spin of the reels!

It doesn’t take a genius to work out that the symbols at this slot are all related to the world of bees, however the highest paying symbols during the base game are the two scatter symbols, each of which will grant you a win worth 2,500x your bet – as well as the chance to play the bonus game associated with each one. The most that can be bet per spin at this slot is £0.50, while the maximum bet amount is £250. This means that this slot is best for those who prefer playing at slightly higher stakes. It’s also important to mention that this is a slot with medium volatility, meaning that you won’t keep on getting small wins regularly, but that you also won’t have to wait ages for a decent sized win.

Perhaps the only negative thing to say about Pollen Party is that the graphics aren’t as great as some of the other slots out there, and this is unusual for a slot from Microgaming. The fact that the game is so enjoyable to play makes up for this though, and shows that looks aren’t everything in the world of online gambling.

For most online slots players, bonuses are an incredibly important part of any game, and there are a few to keep players entertained at Pollen Party. There aren’t as many as there are at some other online slots though, however this could please some, who feel that excessive amounts of bonus features simply cause confusion, and don’t add to the overall enjoyment that the game has to offer.

The first bonus is the wild symbol, and during the base game this is represented by the game’s logo. It’s just a standard wild symbol, which might disappoint some, meaning that it simply substitutes for most of the other symbols on the reels and can therefore help to create some nice winning combinations. When you activate the free spins bonus though, you’ll find that wild symbols become much more important.

The first of the two main bonuses to mention is the free spins bonus, and this is activated when you manage to get three or more scatter symbols on the reels. Doing so will also lead to you getting an instant cash prize. When you activate the free spins, you’ll receive twelve of them, and while they are active, there will be an extra symbol on the reels – a flower. When this lands on the middle reel, it will cause up to three wild symbols to appear randomly on the reels.

The other main bonus at this online slot is called the Babee Bonus, and this is the feature that can lead to the highest prize the game offers, which is £110,000. This bonus is triggered when you get three or more bonus symbols anywhere on the reels. Doing so will also see you awarded an instant cash prize, as the bonus symbol is also a scatter symbol. You’ll then have to play a simple picking game, revealing prizes as you go. If you reveal a baby bee, you will receive an extra life, however revealing the “POP” symbol causes the game to come to an end.

Pollen Party is a simple slot, and one that will appeal to a broad range of different players – although the slightly high bet amounts will put off some players with less money to spend. The bonuses, while not plentiful, are good, and can lead to some nice prizes, while the overall gameplay is refreshingly different from the norm. So, if you are getting bored of playing slots with exactly the same gameplay as one another, Pollen Party could be a fantastic choice for you. 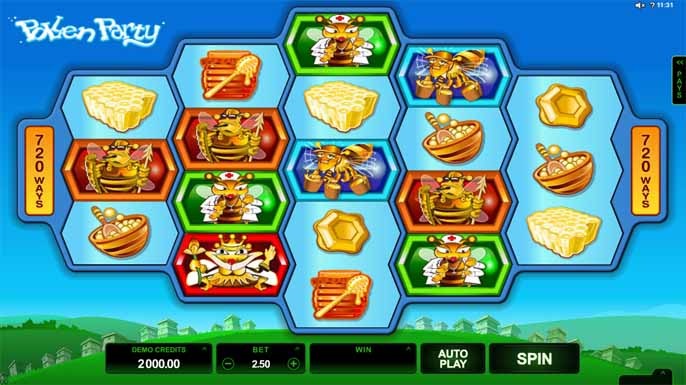 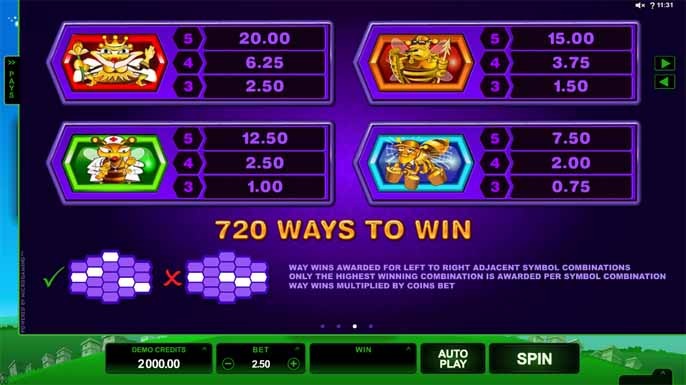