If you’ve played slots for a while now, you’ll know that the online casino industry goes crazy for Halloween! Loads of new Halloween slots are released every year, as the providers battle for supremacy, however sometimes the older slots are simply better. Pumpkin Power has been around since back in 2016, however it still manages to rival the newer names, and this is because it offers pretty much everything you could possibly want. So, whether you like slots with big jackpots or slots that offer great bonus features, you’ll be happy when you play Pumpkin Power from WMS! Why not find out more about this game by reading our Pumpkin Power review below?

The first thing to look at is the graphics and you’ll find that they’re pretty basic. The symbols have been created with a keen eye for the theme, so you’ll find things like black cats and witches on the reels, while the backdrop is a simple spooky scene. We know that this slot won’t win any prizes for its looks, as there isn’t anything to take the graphics to the next level, however you should remember that slots are about more than the way they look.

Pumpkin Power is a slot with five reels and three rows, so it looks the same as most other slots out there. Across the reels you’ll find that there are 243 different ways to win, which means that every spin of the reels should be an exciting one. In order to win, you’ll simply need to get identical symbols on three consecutive reels, starting from the first reel. You can’t alter the number of ways to win there are, but why would you ever want to do this anyway?

How much money can bet when playing this slot? Well, low stakes players should be really happy, as the minimum bet amount is £0.01. High stakes players won’t be as impressed though, as the most that can be bet per spin is just £37.50. You can adjust the amount you bet by changing the Bet Multiplier field, as well as the Base Bet field. Remember that the more money you bet, the more money you could win.

The final thing to look at in this section is the amount of money you can win, and you’ll be glad to find that Pumpkin Power has a respectable RTP of 95.19%. The most that can be won per payline is 80x your bet per payline. We know that this isn’t too impressive, however remember that you can have multiple wins per spin, so the maximum prize is actually quite a lot larger. The haunted house is the highest paying symbol on the reels, so you’ll want to see it spinning into view as often as possible.

The first of the bonus features to mention is the wild symbol and this is represented by the witch. As with most wild symbols, it can substitute for other symbols on the reels and help you to create some really nice winning combinations. You will see it spinning into view on reels two, three and four and the wild symbol could lead to you winning some huge prizes.

Next up there’s the Dice Bonus. This will start when you manage to get a pumpkin symbol anywhere on the third reel. When this happens, a die will be rolled over the reels and it will come to rest over a symbol. The number showing on the die will be the multiplier and the symbol it lands on will be multiplied by that amount. What’s more, you will also receive five free spins after this bonus has played out.

The main bonus at this slot is the free spins and these start when you get three or more pumpkins anywhere on the reels. Usually we’d tell you about the special features attached to the free spins, however there simply aren’t any at this slot. So, you’ll simply get 12 free spins, without a multiplier or extra features added. It’s therefore a pretty boring bonus feature, however it can still lead to you winning some nice sums of money.

Pumpkin Power is an extremely good game, especially if you’re looking to play a slot machine around the time of Halloween. The graphics aren’t the greatest around and the free spins aren’t too exciting, but you’ll still find that this slot has fantastic gameplay and you should enjoy every spin of the reels. So, if you want to play a spooky slot this Halloween, we’d definitely recommend having a few spins at Novomatic’s Pumpkin Power. 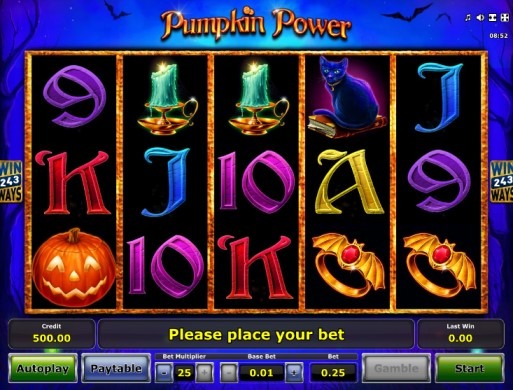 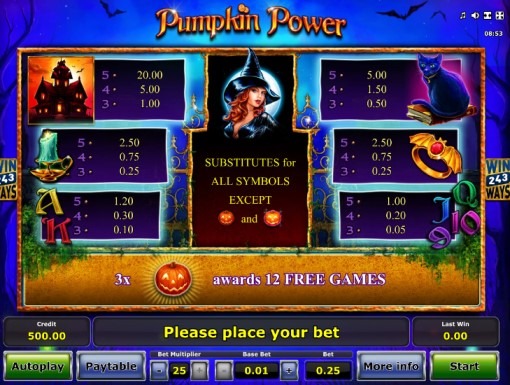