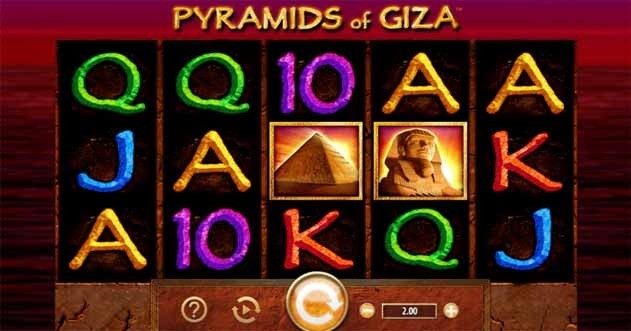 Everything about the Pyramids of Giza online slot machine is simple. The Ancient Egyptian theme, graphics and game play aren’t as enticing as most players would like. However, this game can be a relaxing experience for anyone who has ha a tough day.

Set against the Nile River and the purple haze of the sky, the reels in Pyramids of Giza appear to be placed on clay tiles. The symbols players see on the reels are the eye of horus, lotus flowers, and scarab beetles. A pyramid serves as the game’s scatter symbol. There is no wild or bonus symbol.

The only bonus offered is triggered with three of the pyramid scatters on the first, third, and fifth reels, in one spin. This awards players with five spins for free. However there are no bonuses that might help increase the money players could potentially win on those spins.

Aside from free spins, the only other way players are likely to win money is from the sphinx symbol. Those that get five of them to land on an active pay line will win the 250 times the amount of the money they bet on that spin. 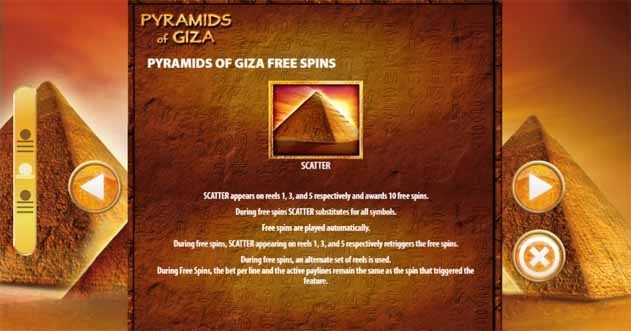 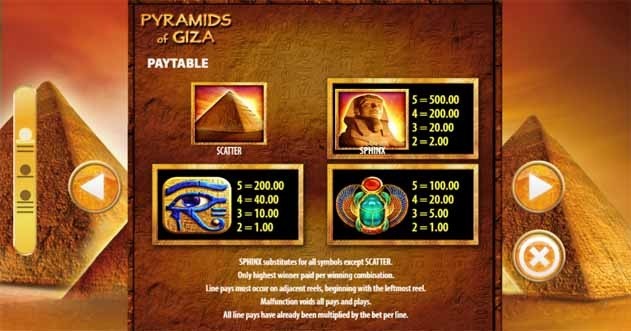 To many, Pyramids of Giza is just a poor imitation of the Book of Ra, a classic video slot machine found in virtually every casino. However, the game could have had the potential to be just as popular as Book of Ra.

Players would likely have taken more of an interest in Pyramids of Giza if it somehow incorporated information about the real thing. Said to be built within the time period of 2589 to 2504 BC, they have since been named one of the Eight Wonders of the World.

The Pyramids lie 592,000 feet wide and were constructed using approximately 2,300,000 stone blocks. Each block weighs anywhere from two to 50 tons. Inside the pyramids, the average air temperature is 68 degrees Fahrenheit.

In order to prevent the pyramids from collapsing in an earthquake or due to heat expansion the foundation is secured thanks to ball and socket construction. The reason why the pyramids appear to be so shiny is that casing stones cover their exteriors. The sunlight then reflects off of the stones, making the pyramids more visible than they would be otherwise. In fact, high atop Israel’s mountains, the Pyramids are easily visible.

Having used any of this knowledge to create the game would have given it some educational value. Instead, players are left with a game that would be hard pressed to get anyone excited. It remains to be seen if the game will be improved upon and re-released.