Queen of the Crystal Rays

Queen of the Crystal Rays is an adventurous online slot machine. This online video slot is set in the queen’s forgotten temple. It brings players into the life of a queen and immerses them in an intriguing fantasy world. Before the game begins, players will see a brief video that explains its premise. During gameplay, players will hear a theme induced music soundtrack.

The queen’s temple holds the all important reels. While the temple is dark, it includes blue lights that glow to illuminate the background. On the reels, players will see theme specific symbols such as gilded artifacts and gemstones of various colors, including blue, green, red, and pink. Other symbols seen on the reels include a treasure chest, pot of gold, and a goblet.
Not surprisingly, the Queen herself serves as the most important symbol in the game. There are also two wilds and one bonus symbol. The scatter symbol in the game is pink and blue.

A randomly triggered bonus feature in the game is Crystal Ray. Anytime this bonus begins, 25 more pay lines on the reels are activated. Symbols on the reels are then transformed into wild multipliers or standard wilds.

The scatter symbol also acts as a multiplier. The value of the multiplier is determined by the amount of the bet played when the bonus is triggered. No matter where the scatter symbol lands on the reels, it pays out a cash prize to players.

The game’s wild symbol of blue, green, and pink can help form winning combinations on the reels. The double wild symbol works the same way, and also acts as a multiplier that doubles players winnings.

When players get at least three of the pink and blue scatter symbol on the reels at once, they win free spins. Players are then able to access four bonus rounds. This leads to the reels being full of credit amounts that may be translated into cash wins for lucky players.The Crystal Rays work their magic and reward players with prizes. Players may win up to five times the amount of the bet that triggered the bonus.

Queen of the Crystal Rays Screenshots 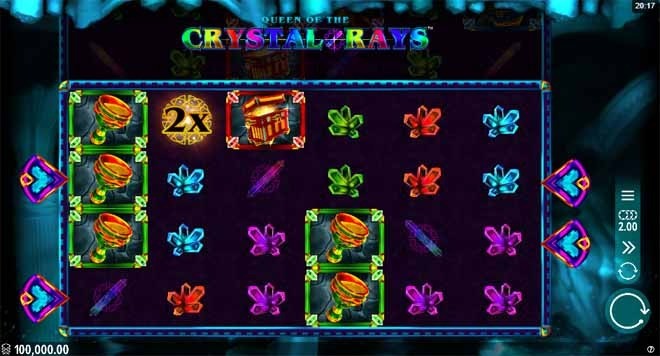 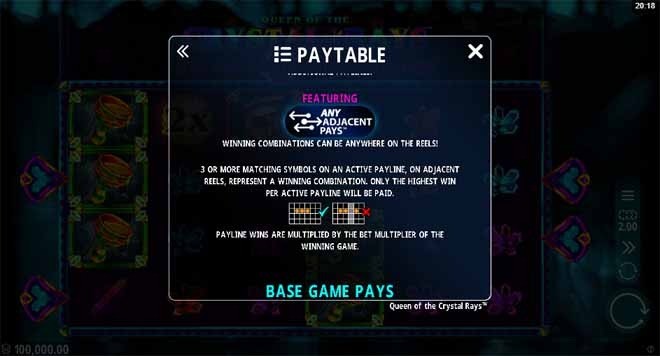 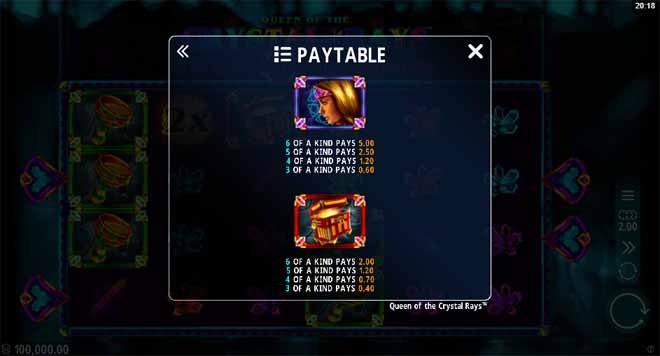 As soon as players see Queen of the Crystal Rays they know it won’t be quite like any other slot. The unusual layout of the reels and brightly colored graphics and symbols give players something new to look at. The reels are transparent, so as not to detract from the symbols on them. This makes the game even more eye catching and allows the symbols to stand out in a way that gets players excited about the game.