Robocop: it’s one of the world’s best-loved movies, and it has spawned a huge amount of merchandise over the years. The latest addition to the Robocop portfolio is an online slot though, which has been created by Playtech. It’s full of fantastic features and big prizes, and even those who haven’t seen the film will really enjoy spinning the reels. If you have seen the movies, don’t worry, as this is based on the original 1987 film, and not the terrible remake released a few years ago!

The fact that this slot is made by Playtech means that you can be pretty sure that it is going to be a great one, and they have certainly delivered on every level with this game. The graphics have a retro feel, as you’d expect from a slot based on a 1980s movie, and you’ll see some of the film’s famous characters spinning around on the reels. All the reels are set against a backdrop of a futuristic Detroit – a scene fans of the movie will know well.

Robocop has five reels and 25 different paylines. These paylines are fixed, so you have to play them all on every spin, however you can change the amount of money you bet per spin. The minimum bet is £0.25, which equates to £0.01 per payline, while the maximum bet amount is £25, or £1 per payline. This means that this slot is perfect for mid-level players, however low stakes and high stakes players might not find that the bet amounts at this slot suit them too well. As with all slots, the more you bet per spin, the more you could win when the reels stop.

The last thing to look at in this section is the prizes, and they are pretty impressive. The top prize during the base game is 2,500x your bet per payline. This means that the maximum prize is £2,500. The jackpot symbol is the Wild symbol, while Robocop and the two other characters are also high-paying symbols. The J-A symbols are the lowest paying symbols at this slot, as is usually the case when they are included.

Do you love seeing loads of bonus features at an online slot? If so, Robocop should be the perfect online slot for you, as it features five of them, as well as a wild symbol. This wild symbol is pretty easy to see on the reels, and it is also the jackpot symbol, so you’ll want to see it spin into view as often as possible!

It’s the randomly triggered features that are the stars of this slot though, and they can be triggered on any spin of the reels. There are four of them in total, and all four can add a serious amount of cash to your online casino account. The first of them is called Shootout Spin, and it sees wild symbols being dispersed in random positions on the reels. As you might imagine, this means that you could find some really nice winning combinations being created.

The next random feature is Robot Attack Spin, and this is a really exciting feature. It sees a huge ED-209 symbol added to the reels, which covers a total of nine symbols. This isn’t a standard symbol either, as it is wild. Therefore, you’ll have the chance to win a massive sum, if the symbols happen to spin in kindly.

Next up is the Line Up Spin, and this sees multipliers coming into play. You’ll find each payline being augmented by two different multipliers, and any wins on the reels will therefore be increased. It might not be the most exciting of the random features, but it can be one of the most profitable.

Finally, there’s the OCP Bonus, and this is a second-screen bonus round. You’ll head into the OCP offices and attempt to pick matching symbols, winning prizes as you do. This is a really enjoyable bonus feature, and one that can lead to some decent prizes.

The main bonus at this slot starts when you manage to get a scatter symbol – which is represented by the Robocop badge – on reels one, three and five. When this happens, you’ll receive free spins, and you’ll be able to enhance the spins by adding one of the random features. Three of these features remain the same, however the OCP Bonus changes to the OCP Mega Bonus, which adds a 5x multiplier to all wins. You can choose which feature to add to the free spins, unless you want to have the feature chosen randomly. The best is probably the OCP Mega Bonus though, although all options can lead to some big prizes.

As you can see, Robocop really does offer a lot in terms of bonus features, and this should be fantastic for the majority of online slots fans! These features don’t get in the way of the overall gameplay though, which is still really good. 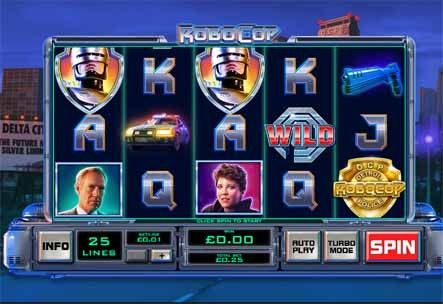 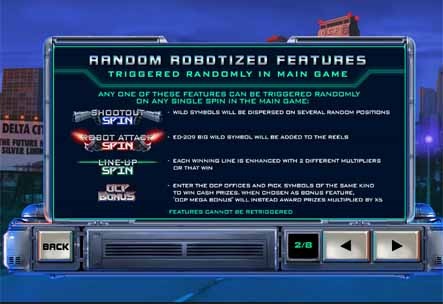 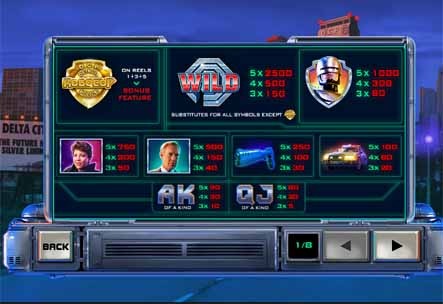