If you’re a fan of politics, and the hilarious – yet, often scary – war of words between President Donald Trump and North Korea supreme leader Kim Jong Un, then you’re going to love this new slot from Red Tiger Gaming. The game features a very tongue in cheek battle between the two leaders and a satirical spin on a nuclear Armageddon. There are plenty of laughs to be had while spinning these reels, as well as some explosive bonus features and a whole lot of money to be won. Yes, it may look like the end of the world, but it’s a lot of fun! Take a read of our review and see if it’s the perfect slot for you!

When loading the game for the first time, you’ll notice a very slapstick feel which is accompanied by cartoon-style graphics of both men that are pretty hilarious. Trump and Kim Jong Un both set up shop either side of the reels, and regular missiles and fighter jets can be seen flying over to each camp as you spin away. A quirky, fun soundtrack can be heard as you try and win some serious cash by matching symbols, which include dynamite filled hamburgers, lap dancer bums, Donald Trump heart tattoos, and army ducks. We’re really not lying when we say you’re going to have a fun and exciting time here.

Rocket Men is a 5 reel, 3 row, 20 payline slot, and like many slot games these days, the paylines cannot be altered. This means that you cannot reduce your ways of winning, but why would you want to do that anyway? We found that 20 paylines is a perfect amount as you can keep focused on what you can win, and there’s no chance of confusion – like you may have when playing games with hundreds of paylines.

Players can bet from as little as 0.20p or as much as £500 per spin which means that everyone is accounted for. It’s easy to adjust your bet size too: simply click on the total amount and a drop down menu will appear with all your options available. Autoplay also enables players to spin up to 100 consecutive spins with options on when the run should be stopped. The range here is one of the best we’ve seen on a slot game and means that casual gamers can have fun, while the more serious high-rollers can also achieve maximum enjoyment.

We’ve mentioned how fun this game can be, but what about the money that you can win? Well, the top paying symbol is the Wild – which arrive in the form of bombs – and awards up to 500 coins per payline. In total there are 9 symbols and the maximum wins will arrive from the bonus games – which we will discuss later on – where you can win up to 1,000 times your original stake.

There are five bonus features in total that will bump up the amount of cash you can win on Rocket Men. Don’s Driving Range feature can be accessed by landing a Trump symbol in reel 1 and is when Don appears at the top end of his tower and begins to whack golf balls onto the reels. All the losing symbols where the balls land become winners, and then a new payout is made. A similar feature comes from Kim’s Little Game where it’s the same principle, as the leader appears at the top of his tower and fires missiles onto the reels, turning them Wild. Again, this allows for a new payout to be made with the extra Wilds in place. In each of these features, you can win up to 1000x your original stake.

Another interesting feature happens when Don lands on reel 1 and Kim appears on reel 5. You will then be treated to a battle between the two men until one wins, resulting in different outcomes. If Kim wins, it triggers the Boom Time feature where he appears to fire rockets at a target and every time he hits one, you get a prize. Who said the North Korea leader was that bad, ay? However, if Don wins the battle, then you will be treated to the Party Time feature where the President slaps a variety of female bums, with each one hiding a cash bonus, until ‘collect’ is unveiled.

However, the best feature arrives in the form of the Nuclear Spins which is the result if Don and Kim’s battle ends in a tie. Each missile adds random Wilds and free spins until one of them is defeated. This has the potential of gaining you plenty of free spins though, as each leader has three lives, so you get the chance to enjoy the show while your bonuses mount up!

Yes, Rocket Men may be a tad controversial, but who cares when it’s so much fun? Rarely will you find a game that delivers so much entertainment in the form of two of the most hated men in the world. The bonuses are full of laughs, and you can win plenty of cash if you manage to trigger the Nuclear Spins feature. It may not be for everybody, and it certainly would not be funny if this scenario happened in real life, but for now we can definitely laugh about it and enjoy this great game from Red Tiger Gaming. 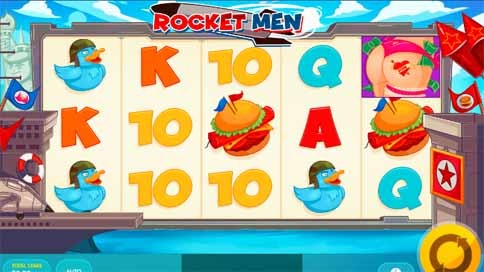 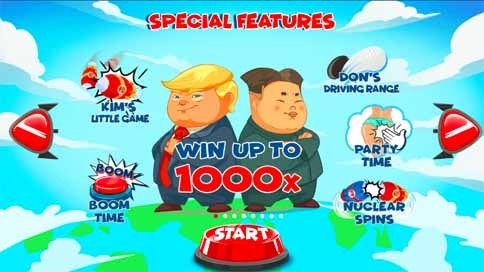