Software developers RTG have jumped on the festive bandwagon by releasing a Christmas slot inspired by everyone’s favourite reindeer. However, Rudolph’s Revenge is a slightly different tale to what we’re used to, as the red-nosed animal loses his patience after not being rewarded for all the years of hard work for Santa and his elves. As you spin the reels, you will notice Rudolph tying down his former work-mates in an attempt to get some much-needed rest this Christmas. The dark, original humour will appeal to most players and you’ll get the opportunity to win plenty of cash among all the chaos. Watch as Rudolph plants bombs and smokes cigars in a festive tale that would surely take the magic away from any child’s Christmas. Thankfully, this slot game is only for adults so sit back and decide whether this game is for you by reading our extensive review!

Upon loading the game, you won’t be surprised to see a very Christmassy and colourful background that features Santa’s sleigh flying across the starry night sky. The big man himself features on the reels along with bad Rudolph and all the elves. You’ll also see little hints of something that could go wrong as there’s plenty of dynamite and rockets that are all part of the red-nose reindeer’s plan. While the symbols are all wonderfully animated and attractive, this is a game now child should go near.

Rudolph’s Revenge features five reels and 50 paylines which cannot be altered. This probably won’t be a problem for a lot of players as they have realised that reducing the amount of active paylines is only going to damage your chances of winning. Software developers seem to have stopped giving players this choice anymore but 50 paylines is still a decent amount that won’t distract you from that actual game itself.

RTG have taken an unusual step in enabling a fixed coin size of 0.04 per payline. However, being as you cannot alter these, it means that each bet must be £2 per spin. This may prove too much for a lot of players, especially those who only like betting low stakes, and at the same time it could be too little for the high-rollers. There is method in the madness though – it was probably done to ensure every spin has a chance of hitting the progressive jackpot, and most other games require wagers higher than £2 in order to qualify, meaning it ends up being quite good value.

But what can you win on this original title? Well, you’ll definitely be pleased to know that the progressive jackpot is worth more than £20,000 and is secured when you get five Rudolph’s on a single payline! You can also receive 2,000 coins by getting five Jolly Santa symbols on a single payline. These are great prizes for the base game and make the £2 per spin wager well worth it!

There are some slots that focus on their base game for their form of excitement and Rudolph’s Revenge probably falls into that category. There is still a decent feature that we will discuss below but players will definitely find their reward through the base game as it gives the chance of winning a huge progressive jackpot. It will also suit a lot of gamers who prefer not to be distracted by the many different features that some slots offer.

We have mentioned the Rudolph symbol briefly above and that also acts as the Wild symbol, meaning it will substitute for everything but the scatter symbol which acts as the Bombs. These symbols must appear aligned left to right but being as there are 50 paylines you will almost always find them. If you get three or more then it will activate the Free Spins feature.

The Free Spins feature is something nearly all slot games include and you will receive at least 7 of these when you trigger the feature. However, finding 4 Bombs will mean the all turn to Wilds and finding 5 bombs means all the Santa symbols will become Wilds – ensuring big payouts. The base multiplier is 2x but for every Rudolph that appears on the screen you get an additional 1x multiplier. This can result in huge multipliers especially if you have the extra Wild symbols by finding five bombs to trigger the feature.

It’s worth noting that you cannot win the progressive jackpot on the free spins because the chance of extra Wilds makes getting five Rudolph’s much easier. However, this isn’t too much of a problem as getting five Wilds on the feature awards 5000 coins multiplied by at least 7. This is because you get 2x and a further 5x if you get five Wilds, allowing for plenty of cash to be won.

It’s clear to see why Rudolph’s Revenge is one of the more popular games on the Christmas market. Players will be attracted to the unique, dark humour on offer and it’s something different to the usual over-the-top festive offerings we see too much. Even though some players may be slightly deterred by the £2 bet per spin, it really is worth it due to the huge progressive jackpot you can earn through the base game. This really is a slot that could make your Christmas – just don’t let the kids get their hands on it or it could spoil theirs. 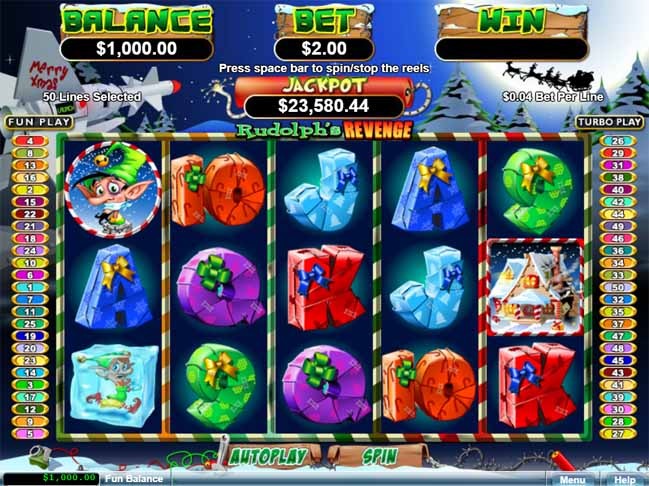 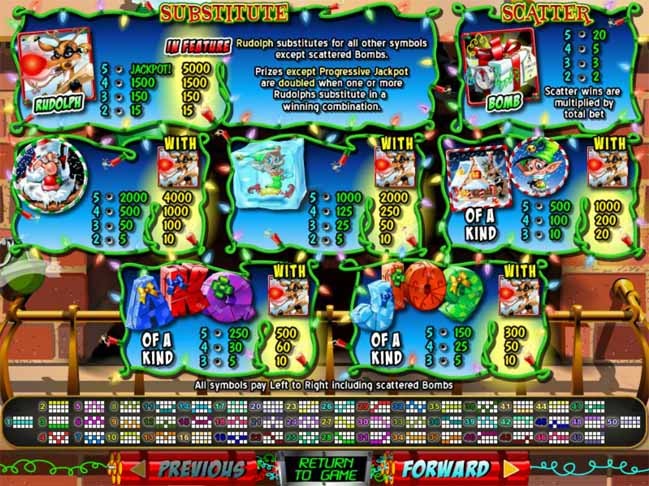