Swedish online gamblers are likely familiar with the heavy metal band Sabaton. The band is so popular that Play N Go honored them with their own self-titled online slot. The game represents what the band likes the most; explosives and large guns.

The background scene in Sabaton is a concert stage complete with spotlights. A war machine is the visual focus on the game screen. The reels include symbols that invoke thoughts of battles and war. They are pilot hats worn by WW2 soldiers, grenades, the battle helmets of the Romans, swords and even powerful ammo. These are the lower value symbols in the game. The higher value symbols represent some of the members of Sabaton. The four that serve as these symbols are the band’s bassist, drummer and two guitarists. The lead singer is the wild symbol in the game. The emblem representing the band is the scatter symbol.

Players must get nine of the scatter symbol on the reels to get the free Battalion Spins. Though this only gets them seven spins for free, those spins may be retriggered at any time. There are two ways players can get so many scatters at once; the traditional way and through Mega Stacks. This is when one of the game symbols is randomly chosen to become a stacked symbol. Even the wild may turn into one. Mega and standard symbols can work together to help players win big. Each member of the band may appear on the reels as a Mega Symbol.

During Battalion Free Spins the three reels in the center of the screen are transformed into Chained Reels. Also during free spins, if at least three but no more than eight scatter symbols appear, they will all become the mystery symbol. 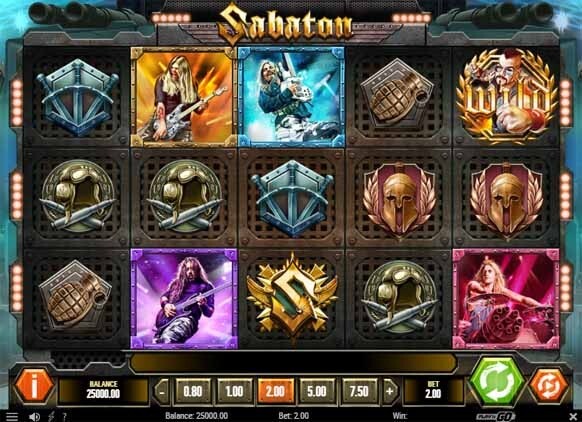 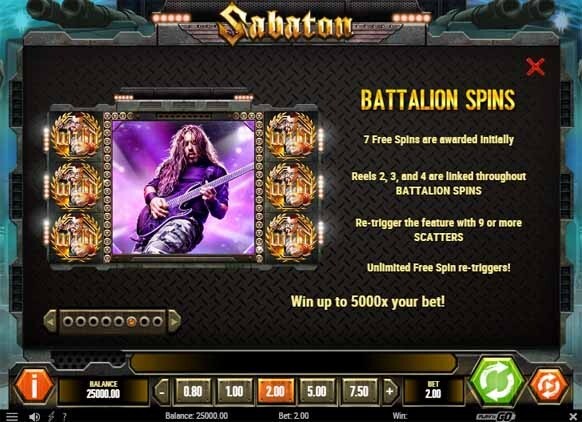 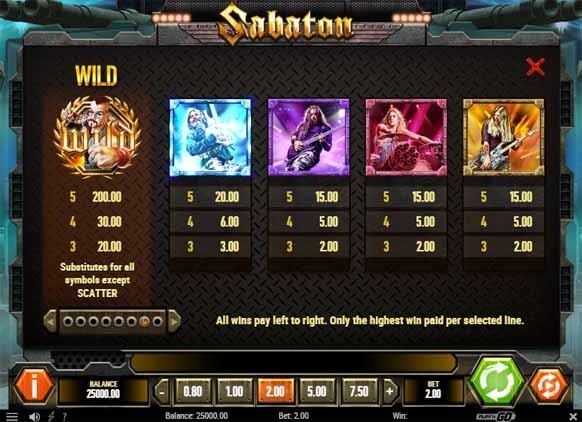 Many players outside of Sweden have never heard of Sabaton. However, its online slot machine is exposing the band to a whole new audience. When they spin the reels, they hear the band’s music playing in the background. This is a testament to how much entertainment values the band and the game has to offer.

There are some interesting features in Sabaton. The structure of the free spins bonus makes this game stand out from others. Though many band themed slots exist, none is quite as unique as this one. It introduces players to the band members and their music.

Not all slot machine games include mega symbols. The fact that this one does adds excitement to the game. It gives players something extra to look forward to. The appeal of Sabaton lies in the unknown. Players that never heard the band’s music before can experience it for the first time.