Fruit slots tend to be a popular theme among many different software developers, but you will have seen nothing like Playtech’s latest offering. Satsumo’s Revenge is a Japanese-based game which pits bad-tempered pieces of fruit against each other in the setting of a martial arts dojo. Yes it really is as crazy and fun as it sounds, and along with unique features, it will give you plenty of opportunity to win big prizes. If this sounds like the perfect slot for you then don’t waste any time in reading our extensive review.

You won’t be surprised to notice a very Japanese feel when loading up Satsumo’s Revenge for the first time. There’s cartoon graphics and the backdrop to the reels is a Wasitsu with the bearded grandmaster maintaining a subtle view over proceedings. Symbols of the game include blueberries, limes, cherries, satsumas, and strawberries and each one has their own unique characteristic. There’s also a joyful, Japanese soundtrack that plays in the background peacefully as you spin away.

Satsumo’s Revenge is a 5 reels, 25 paylines slot and these cannot be altered which is a common rule with software developers these days. Most have realised that players aren’t so silly to reduce and thus damage their chances of winning prizes. We’re also happy with 25 paylines because it means we can concentrate on the game without getting too distracted by the many different ways of winning that can occur on some slots.

Playable from as little as 25p or as much as £500 per spin, Satsumo’s Revenge seems to cater for the majority of gamers. Low-stake players can have a casual gamble and shouldn’t have to dig deep for the minimum required, while high-rollers should be satisfied with the maximum offered. There’s also a nice little Auto Play feature which will enable you to spin up to 100 times without having to click any buttons, and is convenient if you want to sit back and watch the money roll in.

But what is the maximum that you can win on Satsumo’s Revenge and are these tempered little fruits going to pay up? Well, it seems that Playtech have been generous with the prizes they have on offer. It’s worth looking out for the Satsumo symbol as this pesky little number will pay 1000 coins for 5 across a payline. Other decent symbols include the limes and strawberries which offer 300 coins for 5 across a payline, and the blueberries and grapes which pay 150 coins. If you play your cards right though you can win a staggering maximum of 60,000 coins during the bonus features and we’re going to discuss those now.

As with most slots, there is the Wild which you need to look out for and this is the dragon symbol which has Wild written on it. This will substitute for all symbols except for the Scatter (which we will discuss later) and will give you the best possible winning combination. There’s also a second Wild which acts as the star with Wild written on it and when 1 of these lands on reel 5, you will trigger the Shuriken Wilds feature.

The last feature is the Fighting Games feature and this occurs when you find the Scatter symbol -which acts as the berry fighter – on reels 1 and 5. This will pit the fighter off both reels against each other and you will need to choose which one you think is going to win. They will then go head-to-head in a game of rock, paper and scissors, and each fighter will begin with 5 lives each. If you win a round then you will be given 1 free spin and a sticky Wild symbol. If you draw then you will win 1 free spin, and if you lose, you will be deducted a life. You will carry on fighting until you lose all of your lives, but if you win, you will be given an extra free spin at the end of the feature.

Even though the theme is a pretty strange concept to grasp, there’s plenty of fun to be had on Satsumo’s Revenge if you like your fruit slots with a twist. The game is full of bonus rounds and The Fighting Games feature is definitely your best chance of winning big money. The trick is to try and get sticky Wilds early on and then drawing lots of rounds after that in order to get lots of free spins. In terms of graphics, the game manages to deliver too with plenty of crisp cartoon images which help to portray the Japanese theme even more effectively. Even if you’ve never dabbled in martial arts before, it’s well worth doing so for this incredible game. 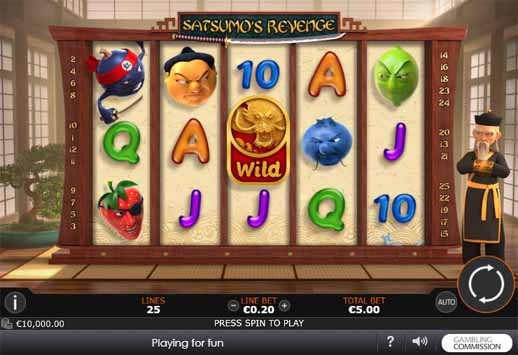 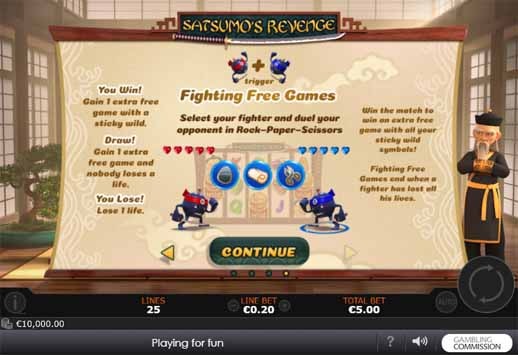