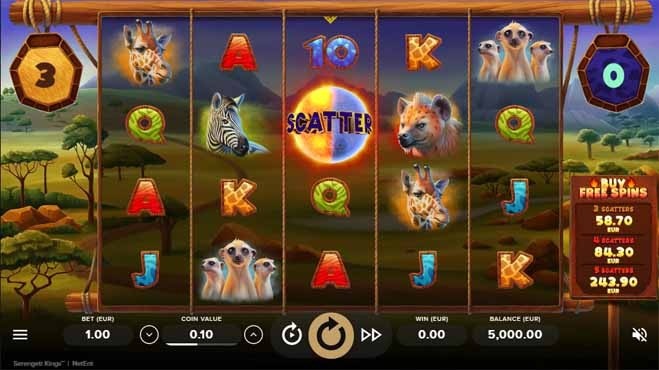 African wildlife is the theme of the online slot Serengeti Kings. It is a virtual getaway for players who want to experience the African safari. This game sticks closely to its intended theme.

Behind the reels players will see a simple African plain dotted with trees. The reels are held up by two brown wooden rods. The main symbols on the reels are the animals that serve as the Serengeti Kings. This includes giraffes, lions, zebras, panthers and hyenas. A beautiful sunset serves as the wild symbol in the game. The scatter symbol is represented by a sun and moon.

There are two separate modes in this game; panther and lion spins. The default mode is the lion spins, which is how it stays for the first 12 spins of the reels. Starting with the 13th consecutive spin, it transfers to the panther spins mode. For every 12 spins after that, the game switches to lion spins again. Players will notice that the lion mode is played in the light of day. When panther mode is triggered, it changes to a nighttime scene.

There are differences in the two game modes. On either side of the reels are a lion counter and a panther counter. In both modes, the corresponding symbols are collected from the reels and credited to the counters.

When players reach the 12th spin of the lion mode or the panther mode, the symbols being held in the counter are added to the reels. Many times this results in a winning combination players would not have gotten otherwise. The wild symbol in this game is created after a lion symbol lands on a panther symbol or vice versa. This can also lead to multipliers being added to winnings.

Like most decent slot machine games, this one also offers free spins. Players get them when they get three or more of the scatter symbol on the reels at once. During free spins any symbols in the counters are added to the reels.

Those that don’t get to trigger free spins can always buy a chance to play them. Players can buy the equivalent of three to five scatter symbols on the reels. They can also choose to purchase multipliers.