So Much Candy Slot Game Review

So Much Candy is the ultimate sweet treat for anyone who enjoys getting a sugar rush. Its universally loved theme has struck a chord with players all over the world.

When the game loads, players will see a purple background with different colored round candies. These are the same candies that are seen on the pink reels. The title of the game hovering above the reels, appear to be made of cotton candy.

Symbols used in the game include a red and white striped candy, as well as both purple and yellow pieces. There are also green Lifesavers, a gumball machine and the classic rock candy. The game’s wild symbol is simply its official logo and can get lucky players a win that could be as high as 300 times the amount of the bet they placed. The gumball machine serves as its scatter symbol.

A winning combination of three or more of the scatter symbol gets free spins for players. While players have an option to take as many as 16 spins for free they should be aware that the more free spins they take the less valuable the multiplier is that comes with it. The players that win the most are the ones that take the fewest free spins offered in exchange for the highest multiplier offered.

Anytime a player gets a winning combination that involves as many as 25 matching symbols they have the chance to work their way up to winning the highest value symbols on the reels. This comes with a significant payout for players, though there is no progressive jackpot in the game.

It is difficult to find reasons to dislike So Much Candy. Aside from the fact that most people enjoy the sweet treat, watching this game play out can be satisfying thanks to the colors of the background, the reels and the candy symbols on them.

Relaxing music plays when the reels are spinning, making this a great game for players who need to unwind from a difficult day.

Games with a food theme are often popular with the masses, and this one is no exception. Playing the game is like having a candy shop at one’s fingertips. The game symbols are presented in such a way that they will likely cause players to crave real candy and seek some out afterwards.

The ability of So Much Candy to entertain players of all ages is one that not every slot machine possesses. This game is easy to learn and understand, with no complicated bonus features and just enough ways to win to make playing it as compelling as possible.

Few players can resist the allure of sweet treats on their computer screen. This is one game that is as fun to watch as it is to play. A childlike innocence is portrayed in the graphics and sound effects used in the game. As a result, So Much Candy is likely to enjoy much success in online casinos. 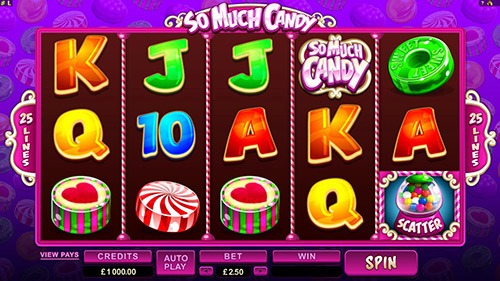 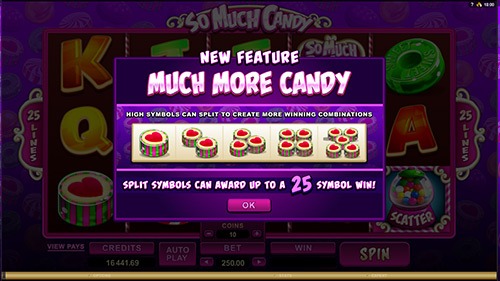