Sparks is a brightly colored, eye catching high energy video slot machine game. With a deep violet background and vibrant, neon symbols this game has more visual appeal than most others.

The quality of the graphics in this game is nothing short of amazing. Players will find the reels filled with random neon shapes in blue, orange, purple, green and red. If players look closely they will see that the game is set against a backdrop of a clear nighttime sky with visible outlines resembling planets.

There are two wild features in Sparks. Those features are the standard wild and the expanding cloning wild. The standard wild symbol in the game is simply the letter “W” in orange and is the game’s most valuable symbol. The expanding clones can be seen on the second and fourth reels. When they are part of a combination of symbols on the reels they may expand to the reel above or the reel below. Sometimes they will remain their normal size.

There are two ways that Sparks can be played. Those two choices are standard left to right play or win both ways, which means a winning combination of symbols can run from the left to the right or the right to the left. Win both ways is the option most players choose since it increases their chances of winning money from the game.

Players who find themselves constantly on the go can download Sparks to most mobile devices. The game is the same whether one plays it on a desktop computer or a mobile device. Graphics and sound effects are as impressive in the mobile version as they are in the desktop version. This is a great game to download for a quick blast of entertainment at any time.

For a simple yet exciting game Sparks is a great choice. Its space theme is fun for players of all ages and the symbols on the reels are meant to resemble fireworks, giving the game a festive feel. What the game lacks in bonuses and a progressive jackpot it makes up for in originality and energy.

As a newer game, Sparks is still finding its audience. While it isn’t the highest paying game, players still find reasons to enjoy it. It is a great game for casual players who don’t want to risk a lot of money. Regular gameplay will lead to winning no more than 20 times one’s original bet. If players win due to expanding wilds they can get as much as 400 times the amount of their bet. This provides motivation for players to keep striving for expanding wilds.

Those who want to practice the game without spending real money on it are urged to search for an online casino that lets them try it in demo mode. Either way, the game is a way for players to add some excitement to their lives. The bright vivid colors in the game make it one that can lighten anyone’s mood after a tough day.

The theme of the game has universal appeal and its high energy makes it an appealing choice when someone is feeling down and needs to be cheered up. Playing Sparks can be a fun break from life, especially if real money is won in the process. 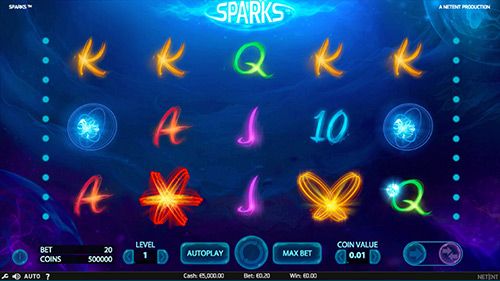 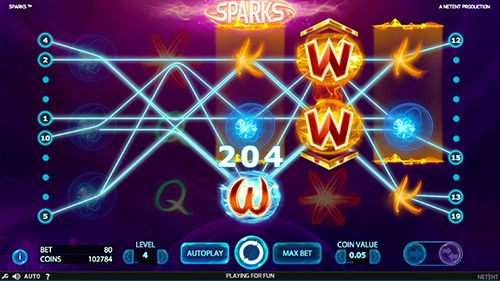