The Wild West is a popular theme with slots developers, and there are already many great games set during this time, such as Reel Outlaws and Dead or Alive. The proliferation of slots with a Wild West theme means that any new Wild West slot has to really stand out – if it doesn’t, it will simply slip into the middle of the pack and soon get forgotten about. While Sticky Bandits from Quickspin doesn’t do anything revolutionary, it still manages to distinguish itself from other Wild West slots, thanks to the nice graphics and huge wild symbols – but more about them later in this Sticky Bandits slot review.

The overall look and feel of this slot from Quickspin is really quite slick. They’ve not tried to do too much with the graphics, however the bandits on the reels have been designed really well, and the background – which looks like a good spot for a train robbery – adds to the overall aesthetics of the game. As with many slots nowadays, there is one problem though – why couldn’t Quickspin have designed unique symbols, instead of falling back on the boring J-A symbols? If they’d done this, they would have made the slot look and feel even better.

You’ll find five reels at this slot, each of which is a massive five symbols high, and this larger-than-usual size leads to loads of excitement on nearly every spin. There are 30 paylines in total on the reels, and these are fixed. This means that there is no way to alter the number of paylines that are active on every spin of the reels. Unlike some slots, the fixed paylines don’t lead to large minimum bets though, as you’ll see in the next paragraph.

While some fixed payline slots still force you to make a bet per payline, Sticky Bandits simply offers an overall bet. Prizes are then worked out using the overall bet amount. This means that, despite having 30 paylines, the minimum bet is just £0.15, which means that nearly every gambler can afford a few spins at this slot. If you’re looking for some higher stakes action though, you might not be massively impressed, as the maximum bet is just £90 – other online slots offer maximum bets of much more than this.

But what about the prizes at this online slot? Well, as you might expect from Quickspin, they are pretty impressive. When playing at the highest stakes, the most you can win per payline is £600, which doesn’t sound like much. The symbols often come stacked at this slot though, so it’s possible to get multiple jackpot combinations in a single spin. The free spins also usually lead to a massive overall prize, and you can learn about these in the next part of this Sticky Bandits online slot machine review. The RTP of this slot is 96.58% and it is classed as a medium-high volatility game.

Sticky Bandits only has two bonus features to mention, and this might instantly put some online slots fans off this game. There’s good news though, as both the bonus features are fantastic, and also really exciting. The first of them to mention is the wild symbols, and these aren’t standard wild symbols. Instead, they are huge, and can cover the entirety of reels two and three, or reels four and five. This means it’s technically possible to get wilds completely covering four reels – something that guarantees some huge prizes!

The free spins are where you can make the largest amounts of money though, and they are some of the best free spins found at any online slot. To activate them, you’ll need to get a Bonus symbol on the first reel, and then at least one position on the reels covered by a wild symbol. This will then lead to you getting seven free spins in total. This might not seem like many free spins, however don’t worry, as you should still make a significant sum of cash!

When it comes to bonus features, that’s everything there is. Quickspin have clearly prioritised quality over quantity here though. You won’t spin the free spins into view too often, however be patient, as activating them is more than worth the wait.

As mentioned at the beginning of this review, Sticky Bandits has really managed to carve a niche for itself in the already crowded world of Wild West slots. This hasn’t been done by offering spectacular graphics or loads of features though – instead, it’s been done by ensuring the features on offer are great fun, and lead to some huge prizes. So, if you want to play a well-designed game and have the chance to win some big prizes, why not play Sticky Bandits today, at one of our recommended online casinos. 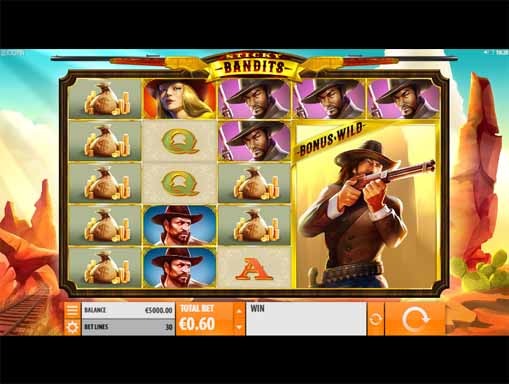 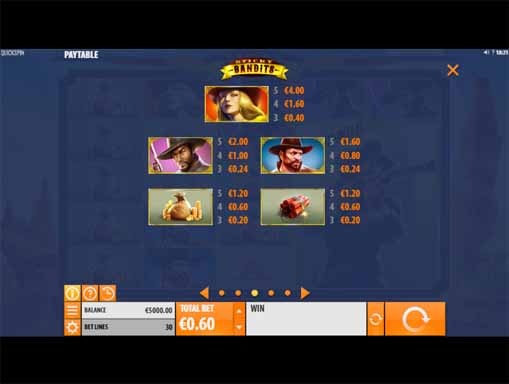