For fans of the Superman series of video slot machine games, Superman II is a real treat. The game is based on the sequel to Superman, released in 1980. In this game players work to battle Planet Krypton’s General Zod, Non and Ursa. Lex Luthor joins the trio of characters after escaping from prison, with the goal of finally defeating Superman.

Not surprisingly, the game’s wild symbol is represented by Superman’s logo. The Daily Planet symbol is the game’s scatter symbol. Other symbols in the game include Lex Luthor, Lois Lane and Clark’s eyeglasses.

Superman II is a brand new online video slot machine game found at many virtual casinos. With five reels and 25 pay lines there are plenty of opportunities for players to win. This game is well suited for casual players as the maximum bet a player can make per spin is $25. It is tied to a progressive jackpot that players can’t resist chasing after. There are four possible jackpots players can win. Those jackpots are the minor, minor, major and grand jackpots. When players trigger the jackpot bonus round they are guaranteed to win one of these. Though a growing number of online casinos are or will be offering this game to their players, there is no way to try it for free.

DC Comics has a deal that involves creating many video slot machine games based on their comic book characters. Superman II is one of the latest additions to the series of games, with more to come.

When players get the Daily Planet scatter symbol on the reels first, third and fifth reels, they assume the role of Clark Kent. Players are then taken to a new screen where Kent is pictured in a Daily Planet office, with a copy of the newspaper laying on the surface of a desk. Players then will see five different headlines on the newspapers. The newspaper headline they choose determines which bonus game they get to play.

The five possible headlines/bonus games are:

The Battle for Metropolis bonus game is more action packed than most others. In this game players take on Krypton’s criminals. At each stage of the battle against the criminals players choose a shield that gives them either a prize or cash. If players choose x-ray vision they get the top prize. Players may also be awarded with Kryptonite that they can save up to make this bonus game last longer. The bonus round ends when players click on a shield and get the word “Collect.”

Phantom Zone is the game’s free spin bonus. During this bonus the reels gain a 2X2 grid in various positions. This gives players extra wild symbols for their free spins. With every spin of the reels one symbol is randomly chosen to serve as the wild. The free spins end when players uncover a multiplier, which is applied to their bonus game winnings.

The Skyline Fight is another free spins feature. In this bonus game, players get 10 free spins and a multiplier. The multiplier increases every time Superman makes an appearance on the third reel. When this happens the spins counter freezes and a villain comes along and unfreezes it.

X-Ray Vision is also a free spins round. Players get 15 spins of the reels for free. They will then see an X-Ray logo on the screen’s third reel. The X-Ray symbol becomes the Superman logo and is placed on the second and fourth reels. Only then will players see how much money they won from this bonus.

The Lois & Clark Bonus involves players choosing from five different colored shields. There are four levels of cash prizes up for grabs in this bonus, and players will win an amount of money based on the shield they chose. 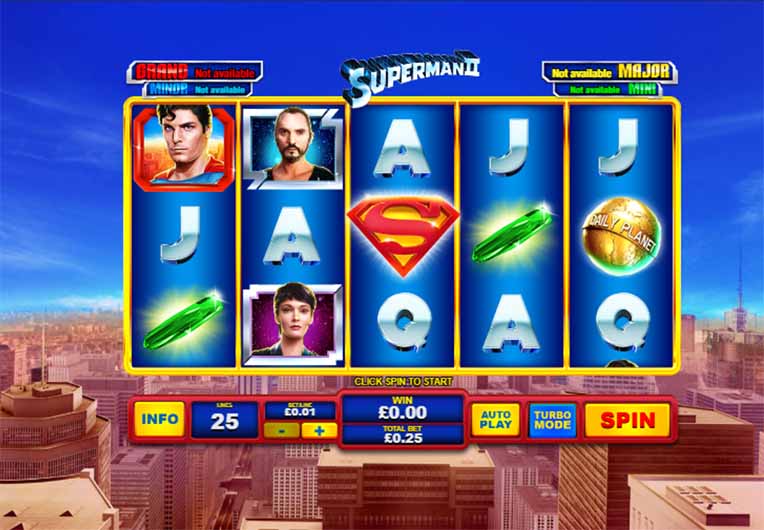 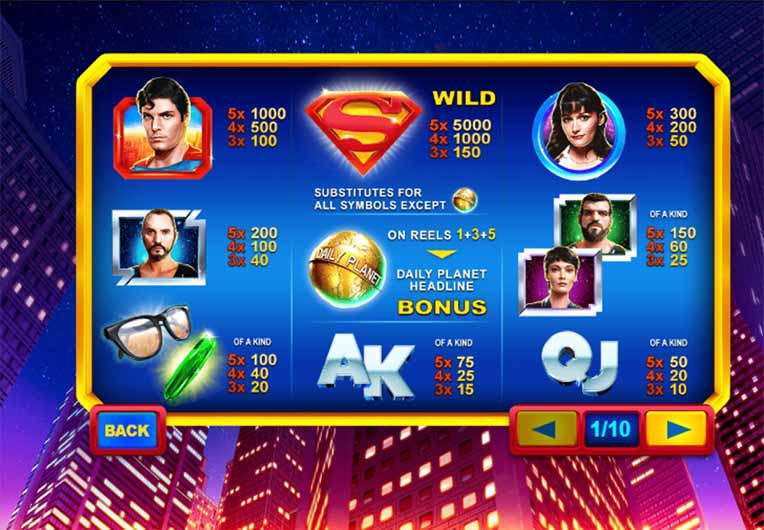