Microgaming’s Supernova is an eye catching video slot machine game found at many online casinos. Its space theme is appealing to players everywhere. Those who don’t take an interest in space are just as entertained by the game as those who do.

The background of the game screen depicts a quiet night in space. Players see twinkling stars in the background. The game has five reels and while three of them are the standard reels found in any slot machine game, the other two are multiplier reels.

The game’s symbols speak to its space theme and include Black Holes, Supernovas, numerous orbs and the Wild Orb, which serves as the wild symbol. The Black Hole serves as the scatter symbol in Supernova. Brightly lit atoms make up the majority of the symbols seen on the reels.

If players get the multiplier icons on one side, the other side, or both sides of the multiplier reels they get their winnings at least doubled. The luckiest players will get ten times the amount they would have won otherwise. Unlike most other video slot machine games, Microgaming’s Supernova offers something unique in the form of a chance to get double multipliers anytime a winning symbol combination is achieved on the reels. The appearance of the Black Hole on the reels when a multiplier is present eliminates the multiplier.

Unfortunately, there is no way to play the game for free by simply using a web browser. Players must download the game software to their computer in order to be able to access it.

One handy feature of this game is that players can choose the auto play feature. This allows them to set the reels to spin automatically for a certain number of times. Using this feature, players can automate as many as 1000 spins of the reels. This provides new players with an excellent way to learn the game or just sit back and have the fun of watching it unfold. Its 27 ways to win feature also makes it more satisfying than many other slot machine games that don’t offer this.

Another feature of the game that players love is the Fast Play option. This allows them to spin the reels at a more rapid pace than they would otherwise. It also adds some more energy to the game and makes it even more stimulating for players.

Few other online slot machine games can be compared to Supernova. The game is easy to learn but offers more excitement than many others. For players who may not have a lot of experience with slot machines, Supernova is a great starter game.

The generous bonuses and unique multipliers make this a game that many players feel is worth betting real money on. Even for those who choose to play for free, there is a lot of excitement to be found. The entertainment value of this game is high, and it is perfect for anyone looking to experience a rush of energy.

The bright colors and graphics used can awaken a player’s senses and make them feel alive. The excitement the game provides is contagious and causes players to keep returning to it repeatedly. For a visually stimulating space themed slot machine game, Supernova is one of the best. 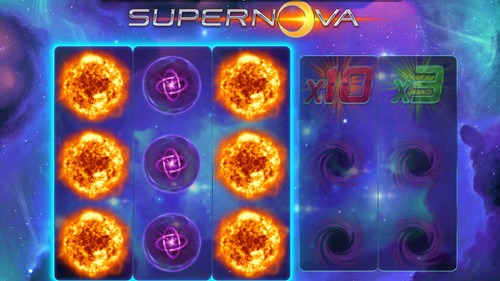 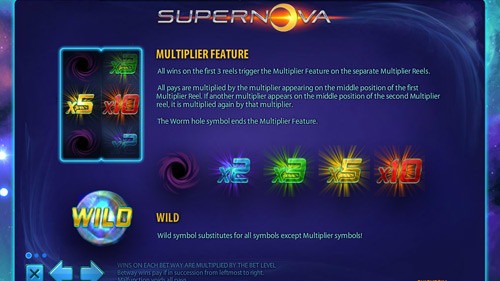