The original king of the jungle now has his own online slot machine game named Tarzan, in honor of the classic character. With beautiful 3D animation it takes a piece of history and turns it modern. The accompanying music will make players feel like they are in the jungle alongside Tarzan.

Those who are familiar with the story of Tarzan will recognize his friends as symbols in the game. This includes the title character, his lady Jane and Professor Porter, Jane’s father. Non-human character symbols used in the game include a cheetah, a parrot and Tarzan’s own beloved pet chimp. The remaining symbols on the reels are the fruits of the jungle. The wild symbol is represented by the official Tarzan logo and becomes a stacked symbol during gameplay. Getting at least three of the wild symbol lined up on the reels after a single spin gets players a large cash prize.

The game is best known for its many bonus features that draw in even players who don’t know the history of Tarzan. The bonus wheel feature is triggered when players get at least three of the appropriate symbol on the reels at once. Players get to spin the wheel for free and will instantly win scatter rewards. The more bonus symbols that appear on the reels after a single spin the higher the scatter reward a player wins is. Bonus rewards include multipliers, a jackpot, rolling reels, growing wilds, the free spin bonus game and the Pick-A-Potamus Bonus Game.

Multiplier and jackpot rewards result in large cash winnings for players. If players win the free spin bonus game they get 12 spins that are played with growing wilds and rolling reels. Players who obtain growing wilds will have additional wilds added to the reels, resulting in additional cash prizes. Rolling reels are meant to rid the reels of winning symbols after a winning combination has been achieved. Those winning symbols are then replaced with new symbols and players continue to collect cash prizes until the first spin that does not result in a winning combination. The Pick-A-Potamus Bonus Game is a pick and click game that presents players who win the bonus wheel a chance to win 12 prizes in a row. This bonus game ends when a player’s pick results in a Hippo as opposed to a prize amount.

Packed full of excitement and entertainment, Tarzan is one slot machine game that players of all ages have found to be fascinating and compelling. 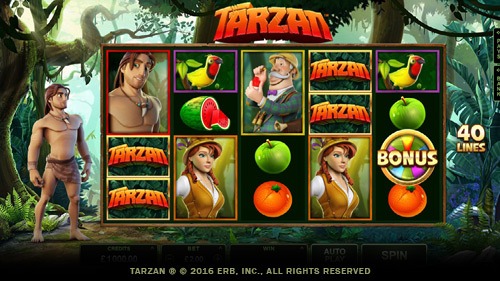 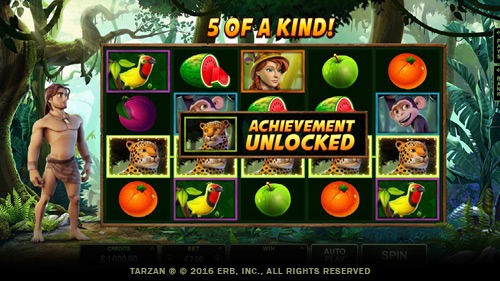 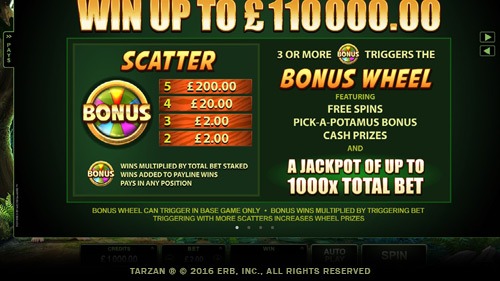