For some, fishing is the perfect way to spend a lazy afternoon, while others think that it’s the most boring thing they can possibly do with their free time. Regardless of your opinion though, you should really enjoy playing The Angler, which is one of the latest online slots released by the people over at BetSoft! Like many other titles from BetSoft, The Angler has a reasonably large number of bonus features, which keeps excitement high all the time. This will undoubtedly appeal to many players, however it will put off others, as they’re looking for simpler slots to play. To find out whether this slot is right for you, why not read through the rest of our review of The Angler?

The first thing to say is this: The Angler looks absolutely fantastic, but what more would you expect from a slot created by BetSoft? The eponymous angler is stood to the side of the reels, ready to cheer you on, while the reels are set against a beautiful backdrop. The reels themselves also look fantastic, and the animations when you win are really impressive. So, if you like slots that look absolutely amazing, The Angler should be a really good choice. Don’t think that this slot is all about looks though, as you’ll find out when you continue reading this review.

There are five reels at this slot, and you’ll find just 20 paylines on them – a number that is far less than many other online slots out there. Don’t let the slightly small number of paylines put you off though, as this game still manages to deliver plenty of excitement when you play. You can adjust the number of paylines you play using the buttons below the reels, however most players prefer to play the maximum number. If you’re looking to reduce the amount of money you gamble, it is better to lower the stakes, and not the number of paylines.

This slot is really good for those looking to play at low stakes, as the minimum bet per spin is just £0.02. Those looking to play at higher stakes aren’t left out though, as the maximum bet amount at this slot is £100. You’ll need to use the tabs underneath the first and second reels to tweak the amount of money you bet per spin. Remember that prizes are decided by the amount you bet per payline, and not by your total bet amount.

The last thing to talk about in this section is the prizes – probably the most important aspect of any online slot! The most you can win during the base game is 350x your bet per payline, meaning that the top prize is worth £1,750 when playing at the highest stakes. The jackpot symbol is the angler, while the shark and the turtle are also high-paying symbols. It’s possible to win much more than this when you activate the bonus features though, and these are discussed in the next section of this review.

The Angler has a number of good bonus features, although not as many as some of the other online slots released by BetSoft in the past. The first of them to mention – as well as the one that activates more often than the others – is the wild symbol, and this is represented by an octopus holding a sign. During the base game, this is a standard wild symbol, therefore meaning that it can substitute for other symbols and create winning combinations. It appears on the second, third, fourth and fifth reels.

There are also free spins at this slot, and they are triggered when you manage to spin in three Scatter symbols anywhere on reels three, four and five. There’s an interesting twist to the free spins though, and it concerns the wild symbols. When they spin into view, they will cling to the reels for the duration of the free spins. This means that you could find yourself with many wild symbols on the reels – which could lead to some big prizes!

The main bonus feature at this slot happens when you manage to get three Bonus symbols on reels one, two and three. This will activate the Time to Fish bonus game. You’ll need to reel in as many fish as you possibly can, winning prizes for each one you land. It’s an exciting game, and it’s also the bonus feature that all players will want to activate. As with the other features, it’s also possible to win some really large prizes when you activate this feature.

The last feature to mention is the Gamble feature, and this is found at many online slots nowadays. It allows you to risk half or all your winnings on the flip of a coin. Correctly predict the coin flip and you’ll double your money, but guess incorrectly and you’ll lose the money you’ve gambled. It is completely up to you whether you use this feature or not, however most experienced gamblers will avoid using the Gamble option.

The Angler might not have a theme that sounds too exciting, however it certainly manages to deliver loads of action whenever the reels are spun. The bonus features should appeal to many slots players, however they don’t take over the whole game, ensuring that the base game is also full of excitement. It’s the graphics that really elevate this slot though, as they have been beautifully created by the people over at BetSoft. 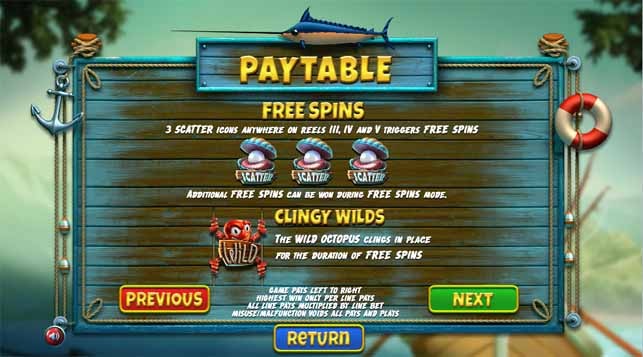