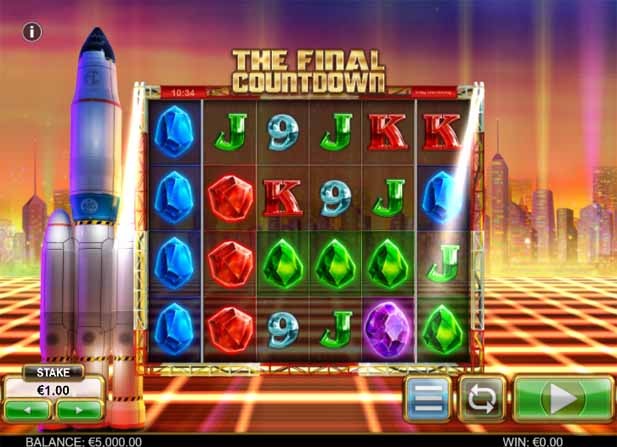 Big Time Gaming developers must enjoy Swedish music. The company created the video slot machine, The Final Countdown, as a tribute to a rock band known as Europe. One of their biggest hits was the inspiration for the name and theme of the game.

The theme of The Final Countdown has more layers to it than most slots do. It combines the counting down to a rocket launch with a stage typical of what Europe would perform on.

The most prominent graphic in the game is a launch pad for a rocket. It serves as the forefront of the game screen, with a skyline in the background. The vibrant colors of a fake city’s view makes the game visually pleasing and exciting. The launch pad also provides a burst of light. It comes from a rig used to light the stage. Spotlights beam down on the stage, completing the game’s ambience.

The symbols on the reels are just as colorful as any of the graphics. Though they don’t relate to the game’s theme, they still add to it. Each symbol of value is a different gem. The gems are bright shades of purple, green, red and blue. Its two wild symbols are a male and female astronaut. The scatter symbol is simply a golden tile. The golden tile has the initials of the game on it.

There are several bonus features in The Final Countdown. One is the cloned reels. Players will find this feature is included in regular gameplay as well as free spins. Anytime the reels are spinning, two, three or more can connect. Those reels then share all of the same symbols. Players may even get scatter symbols on the reels when they are cloned. They also want to watch out for wilds. If a wild symbol lands on four cloned reels, there will automatically be four wilds in play. Even if a wild symbol lands on two cloned reels, players win four times the amount they would have otherwise.

When it comes to free spins, they are triggered when the female astronaut appears on the reels. In addition to the wild, a multiplier will appear on the reels. This also quadruples a player’s winnings.

Players initially receive eight spins for free. If they get 10 of the scatter symbol on the reels at once they get win eight free spins. The free spins continue while the wild symbols continue to expand. When they have expanded as much as they can the free spins bonus ends.

The male astronaut also triggers free spins called Heading For Venus. He gives players 15 spins for free, with endless chances for free spins to be restarted. A standard wild symbol may become a Velocity Wild. When it does, the luckiest of players walk away with a huge cash prize. For many players, this is the highlight of the game. Everything about The Final Countdown inspires excitement in players. 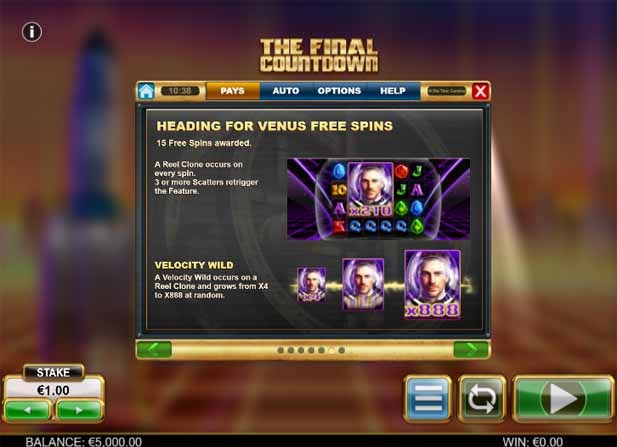 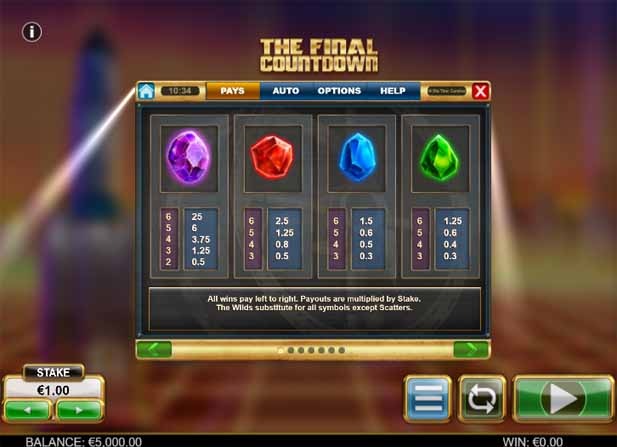