If you’re a big fan of comedies then you’ve probably heard of The Love Guru. Made in 2008 and featuring Mike Myers – more commonly recognised as the actor who plays Austin Powers – the film is based on an American who is raised outside of the U.S by gurus. Thankfully, iSoftBet have managed to create a slot that takes on many aspects of the movie onto the reels, and even though the film wasn’t a classic, the game adaption definitely is! Why not try reading our detailed review today, and see if this is the perfect slot game for you?

When the game first loads up, you will notice the reels are set in a psychedelic purple frame but, strangely you won’t see the main actor Mike Myers make an appearance. This isn’t a problem as all the other characters are featured, including Dick Pants, Coach Punch, and many others. It’s easy to be drawn into the colourful and attractive graphics of the game, and the Indian backdrop features a pair of elephants either side of the reels that really manage to capture the setting of the original film. The soundtrack from the comedy is also used in the game which enables you to feel a real sense of the Indian culture.

Like most slots, The Love Guru gives you five reels to use and there are 30 paylines. This will suit many players as it means the game is still entertaining without becoming too confusing with lots of ways of winning. It is possible to lower the amount of paylines into multiples of five, but there would be no point in reducing your chances of a winning combination.

Many players will be suited to this slot as you can bet between 30p and £30 on each spin and bet sizes can be altered by clicking on your total amount. Even though £30 isn’t the highest maximum spin we have ever seen, 99% of players will still be happy with this, with exception to the high-rollers of the gaming world. If your luck is in and you manage to hit the jackpot, then the most you can walk away with in one spin is £3,000 which is ideal for one click of a button.

But, how much money can you win at The Love Guru? Well, if you manage to land three symbols in a row on one win line then you will receive a prize – with the characters from the film paying the best money. The Guru Pitka symbol pays 1,000 coins for five in a row and all the other symbols will enable you to receive between 300 and 800 coins. The theoretical return to player (RTP) is around 97.79% but will alter slightly depending if you activate the bonus features.

There are many ways that you can earn additional money on this slot because it has different special features such as Wild, Scatter, Bonus and Free spins that will act as your target on the reels. The Wild symbol comes in the form of a circus elephant and is one of the best in the game as it helps you to complete a winning configuration even if you felt like there was no coming back from a difficult situation.

Another symbol that you need to look out for is the Love Guru. Now, as you may be able to guess, this means you’re in for a great prize if you manage to get three or more of them anywhere on the reels. If this happens, an instant bonus will trigger and you can be expected to receive quite a decent amount of money. You can get up to 15,000 coins, a maximum of 20 free spins and multipliers of between 1x and 5x using this feature.

Try keeping an eye out for the bonus symbol that looks like a bunch of flowers too. If you manage to collect three or more of these anywhere on the reels, then you will trigger the Bonus Round in which you can win up to 15,000 coins, up to 20 free spins and also an extra Wild symbol. Before receiving your free spins, you will be presented with 12 boxes in which you must choose one, with each container containing a different prize. Be aware, that one of these prizes contains a massive 15,000 coins.

If you’re a fan of the film, then you definitely should try this video slot as it’s a great adaptation of the Mike Myers title. However, even if comedy isn’t your thing, it’s possible to still appreciate this game from iSoftBet given unique atmosphere created and the graphics on show. There are plenty of great bonuses to be taken advantage of too with huge prizes considering the maximum bet is £30. iSoftBet have a habit of recreating films and series into great slots – 24, Beverley Hills, Paranormal Activity, to name just a few – and it seems they have now done it again with The Love Guru. 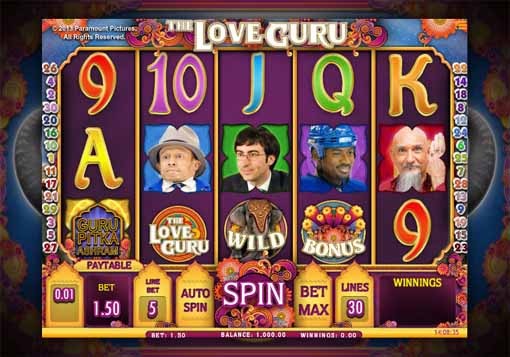