The Mask of Zorro

You’ve seen the movies before, and you might have even played a slot with the same theme previously, but now it is time for Playtech to give their version of the famous Mask of Zorro story. This slot has only recently been released, and it is already gaining quite a following, thanks to the stunningly enjoyable gameplay and the fun features. What’s more, this slot also has a seriously large jackpot waiting to be won, which you can learn more about when you read through this Mask of Zorro online slot review.

When you first load this slot, you’ll see that the graphics aren’t quite as spectacular as those found at some other online slots. This is something often said about Playtech slots, and most find that the slightly basic graphics are more than made up for in other areas of the gameplay. Everything is certainly set out very neatly though, and new and experienced gamblers alike should have no problems understanding how to play this game. One thing you might need to find quickly is the mute button though, as the music can get annoying. Turning it off is as simple as clicking on the icon in the top right of the screen.

The Mask of Zorro is a slot with five reels, four rows, and a total of 40 fixed paylines. The fact that they are fixed means that you’ll have to play all 40 on every spin, but this won’t be a problem for most, as they know that more paylines leads to a better chance of winning. If costs are getting too high though, you can still reduce the amount you bet per payline. The paylines aren’t shown on the game’s main screen, however you can click the “Info” button and find out all about them if you want to.

When it comes to the amount you bet, you can adjust your bet per payline simply by clicking the plus and minus buttons near the bottom of the screen. Remember that your bet will be multiplied by forty though, so factor this in when trying to choose exactly how much money you want to gamble. The minimum bet at this slot is incredibly high, as the least you can wager per spin is £4.00, so those looking to play at the lowest stakes should look elsewhere. The maximum total bet per spin is a staggering £4,000, so the highest of high rollers should still be incredibly happy.

Perhaps the most important thing to talk about in this entire Mask of Zorro review is the jackpot though. Initially, you might not be too impressed with the amount of money you can win, as the maximum win per payline is just 25x your stake. It gets better though, as the free spins bonus feature can reward you with 3,000x your stake on every spin. During the base game, the best paying symbol is the character played by Anthony Hopkins, while all other characters also have decent payouts attached to them.

This is a slot with some really good bonus features, however there aren’t so many that the overall enjoyment of the game is affected. The most commonly seen bonus feature at this slot is undoubtedly the wild symbol, and this is represented on the reels by Zorro himself. It’s a standard wild symbol, meaning that it can substitute for most other symbols on the reels, which could help you to spin in an impressive winning combination. The Zorro symbol is also the highest paying symbol, so you’ll want to see it spinning into view as often as possible!

The next bonus feature to mention at this slot is called the Mark of Zorro, and it can activate randomly on any spin of the reels. Zorro will slash his trademark Z over the reels, and the positions covered by his mark will turn wild. If you’re lucky, you could find yourself getting ten wild symbols spread across the reels – something that should lead to a massive cash prize.

Finally, there is the main bonus game, which is called the Secret Cave Bonus. It is activated when you get the Bonus symbol on reels one, three and five at the same time. Upon activation, you’ll be asked to pick two out of six candles, and this will reveal the number of free spins you’ll receive and/or the multiplier. If you get two multipliers and no free spins, don’t worry, as you’ll still get five free spins given to you. The free spins will then play out as normal, and you can retrigger them by getting three more Bonus symbols on the reels. There is no limit to the number of times you can retrigger this feature.

It should be mentioned that the main bonus feature is very tough to activate. Quite often you’ll see the first two symbols fall perfectly into place but will then be disappointed as the fifth reel fails to show the symbol you need. It really is worth the wait though, as the free spins bonus leads to the biggest prizes of the entire game.

The Mask of Zorro doesn’t look to exciting at first, thanks to the plain graphics, however you’ll soon find that there are many reasons why The Mask of Zorro is a slot you should definitely play. The biggest of these reasons is the jackpot though, and you’ll be able to win up to 3,000x your stake on a single free spin. So, if you’re looking for a new slot to play, we would certainly recommend playing Playtech’s The Mask of Zorro at one of our recommended casinos. 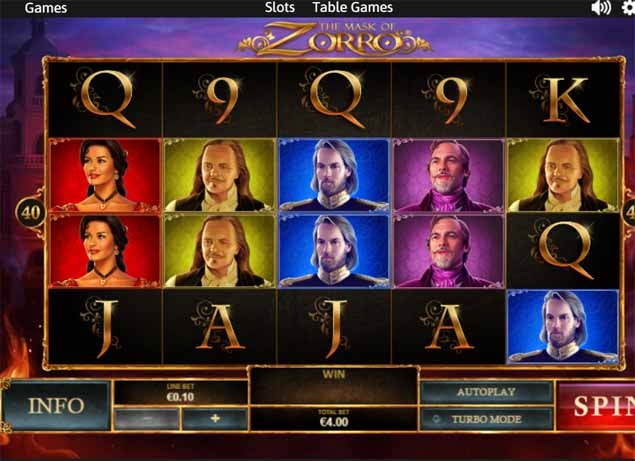 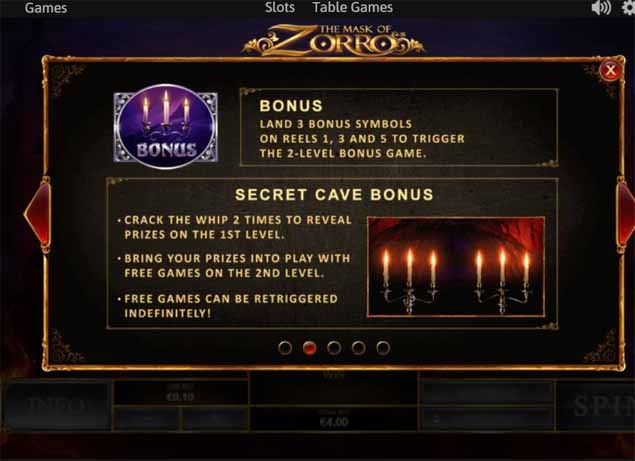