The Phantom of the Opera

The Phantom of the Opera Slot Game Review

The Phantom of the Opera has been a success on stage and screen, wowing audiences throughout the world for many years. Andrew Lloyd Webber’s creation can now be enjoyed by slots fans too, as Microgaming have made a great Phantom of the Opera slot, which features screenshots from the movie, some great bonuses, and some absolutely massive prizes. You will, of course, also be able to listen to the stunning soundtrack while the reels spin around. So, if you’re a fan of both slots and the Phantom of the Opera, why not read through the detailed review below?

Looks-wise, this slot isn’t that impressive. Microgaming have just used a pretty plain background – which is rather aptly a stage – and the symbols are also quite basic and uninspiring. You won’t care about this though, as the music drowns out any issues this online slot has, and ensures every second you spend playing this slot is a fantastic one. Unlike most slots, you certainly won’t be reaching for the mute button when you play this Microgaming title.

This slot has standard reels, so you’ll find five of them, each of which is three symbols high. The Phantom of the Opera slot doesn’t just have a few paylines though – instead, 243 ways to win are offered. This means that you just have to get three identical symbols on consecutive reels to win a prize. There is no way to adjust the number of paylines, so you’ll always have to play with 243 ways to win active.

At this slot, you make a total bet, as opposed to making a bet per payline. This makes everything much easier, removing the need for maths as you multiply and divide your way to your bet per payline. The minimum overall bet at the Phantom of the Opera is £0.30, which should be low enough for most players, while the maximum bet is just £15 per spin. This low maximum bet means that some higher stakes players will probably end up giving this slot a miss, and head to one of the slots offering maximum bets of hundreds of pounds instead.

The final thing to mention in this section is also perhaps the most important – the prizes. So, how much money can you win when you spin the reels at this online slot from Microgaming? Well, the biggest possible prize is a cool £116,000, and this can be won via the Chandelier Bonus. When it comes to the standard symbols, the highest paying of them is the mask, which will give you a prize worth 100x your bet when five appear on a payline. The characters are also high paying symbols, while the various objects, such as the rose and the perfume, are lower paying symbols.

The next thing to look at is the bonus features – the highlight of any slot for some online casino enthusiasts. You won’t be disappointed with the bonuses at this slot, as there are a few that could activate, and all can help you win some serious amounts of money. Unlike some other slots, the bonuses don’t completely take over though, ensuring the base game also remains an exciting and important part of the gameplay.

The first bonus feature to mention is the wild symbol, and this is represented by the Phantom of the Opera logo. As with all other wild symbols, it can substitute for most other symbols on the reels, allowing you to make some nice winning combinations. The wild symbol can also come stacked on the reels, taking up two spaces instead of one. This makes it even more useful to you!

There are then three bonus features to look out for, and the first is the Chandelier Bonus – the key to winning this slot’s top prize! The chandelier of the opera house will dramatically fall down onto the reels, and turn two or three reels completely wild. If you have the correct symbols on the other reels, you could find yourself winning a massive £116,000!

The next bonus feature is the Letter Bonus, and this is a pretty simple one. The letter only appears on the fifth reel, and whenever it spins into view, it will reveal a random cash prize. The most that can be won via this feature is 20x your bet, which equates to £300 when playing at the highest stakes. So, this bonus won’t make you rich, but it should give your bankroll a nice boost.

The main bonus feature at this slot – although, as you’ve already seen, not the one with the biggest prizes – starts when you get three or more scatter symbols (the mask) anywhere on the reels. You will then receive an instant cash prize, which varies depending on how many symbols were used to start the feature. You’ll also need to choose from three different bonus features, all of which are fun and can lead to big prizes.

The first of the possible features is the Music of the Night Free Spins. You will get 10 free spins, and every spin will see random features added to the reels, such as a higher multiplier or randomly placed wild symbols. Then there’s the Masquerade Bonus, which is a simple picking bonus, and finally there’s the All I Ask of You Free Spins. These free spins are fantastic – you’ll get 10 in total, and Dancing Wilds will be active. This means that Christine and Raoul – both of whom are wild in this bonus game – will dance on every spin, causing them to appear adjacent to each other. Depending on how they land, they can either expand to cover a whole reel, grant you a multiplier, cause two reels to become completely wild, or add a giant wild symbol to the reels.

The Phantom of the Opera isn’t the best-looking slot in the world, however it makes up for this in many other areas. The gameplay is slick and easy, while the bonus features are all fantastic, bringing loads of excitement, as well as some massive potential prizes. Unusually for a slot though, the music is the real star of the show – you could quite easily sit and listen to this slot all day! So, if you think this slot sounds perfect for you, why not head to your chosen Microgaming casino and start spinning the reels today? 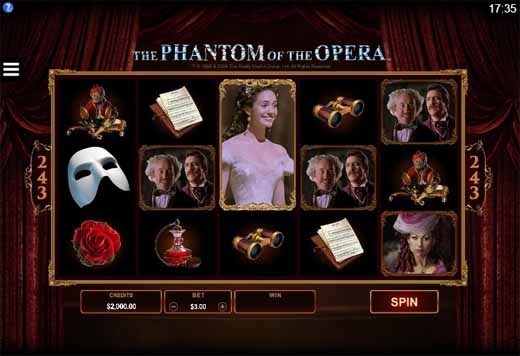 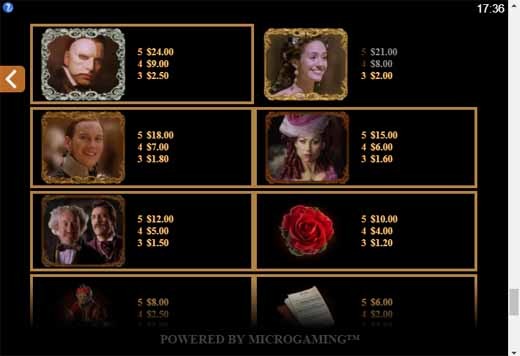