In the world of online slots, there are some titles that have stood the test of time, and still manage to entertain players, despite having been released many years ago. Thunderstruck is one of these titles. Sure, the graphics might not be fantastic, and the bonuses are not as complex as those found at newer games, however loads of people still spin the reels at this slot from Microgaming every day. It just goes to show: the most important thing about online slots is the gameplay, and snazzy graphics and bonus features are secondary to this.

Thunderstruck has five different reels and nine different paylines. These paylines are not fixed though, so you can choose exactly how many you want to play. Of course, you should always remember that the more paylines you play, the more chance there is of you spinning in a winning combination. If you still want to change the number of paylines though, simply click on the “Select Lines” button below the reels.

If you’re looking to reduce the amount you bet per spin, it’s better to lower your bet, rather than adjust the paylines. You can adjust your bet size by clicking the “Select Coins” button. The minimum bet per spin at this slot is £0.05, while the maximum bet amount is £90. This wide range of bet amounts means that this slot is great for both low and high stakes players. To work out your bet per payline, simply divide your total bet by the number of paylines you are playing.

When it comes to the symbols, Microgaming designed a number of unique ones for this game, all of which refer to Norse mythology. So, you’ll find symbols such as Thor’s hammer, Valhalla and lightning bolts on the reels. They have also used standard 10-A symbols at this slot, however they’ve been designed in a way that really fits in with the game. The graphics might not be the best around, and they certainly don’t rival the 3D graphics found at some slots, but this isn’t surprising, considering this slot has been around for over ten years.

The Autoplay feature at this slot also deserves to be mentioned. At most slots, this is a pretty basic feature, simply allowing you to play a set number of spins automatically. At Thunderstruck though, the Autoplay feature has many different features attached to it. This makes it a really useful addition to this slot, and one that many people will choose to use.

Thunderstruck is a pretty old online slot, and therefore there aren’t that many bonus features. There are still a few though, and they are all really entertaining. What’s more, the bonus features at this slot can lead to some really big prizes! The first of the bonus features to mention at this slot is the wild symbol, and this is represented by the Thor symbol. This symbol will substitute for most other symbols on the reels and can therefore help you to create some really nice winning combinations. What’s more, you’ll find that you’ll receive a 2x multiplier whenever a wild symbol forms part of a winning combination.

The main bonus feature at this slot is the free spins, and these start when you manage to get three or more ram symbols anywhere on the reels. When this happens, you’ll receive 15 free spins, and every prize will have a massive 3x multiplier attached to it. It’s a really simple bonus round, as you’d expect from a slot of this age, however the multiplier means that it can lead to some absolutely massive prizes.

The last feature to mention is one commonly seen at online slots, and it’s the Gamble feature. This gives you the chance to quadruple your prize, however gambling unsuccessfully will see you losing everything you’ve managed to win. To use the feature, simply press the “Gamble” button after a winning spin. You’ll double your prize if you manage to correctly guess the colour of the next card, and you’ll quadruple your prize if you correctly guess the next card’s suit.

As you can see, there really aren’t that many features at Thunderstruck, especially when compared to modern video slots from companies such as BetSoft. As soon as you start playing though, you’ll realise that this lack of bonuses really doesn’t affect the overall enjoyment of the game. This is for two reasons: the general gameplay is fantastic, and the prizes that can be won are potentially huge.

Thunderstruck has built a cult following with online slots players, and it is easy to see why. The gameplay at this slot has set the standard for all online slots following it, and the prizes are huge, even when compared to some of the other online slots released more recently. So, if you’re looking for a slot that isn’t tough to play, but still offers some really large potential prizes, Thunderstruck could well be the perfect choice for you. You’ll also most likely like playing Thunderstruck II as well. 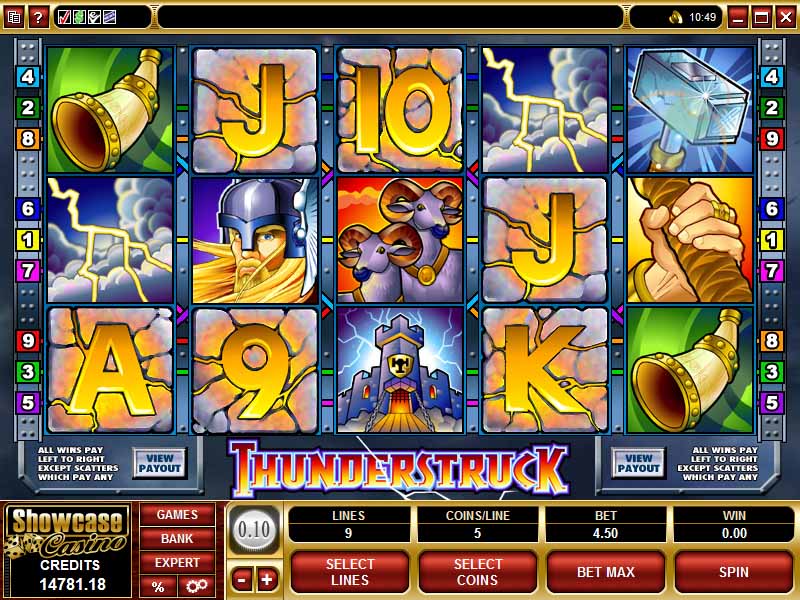 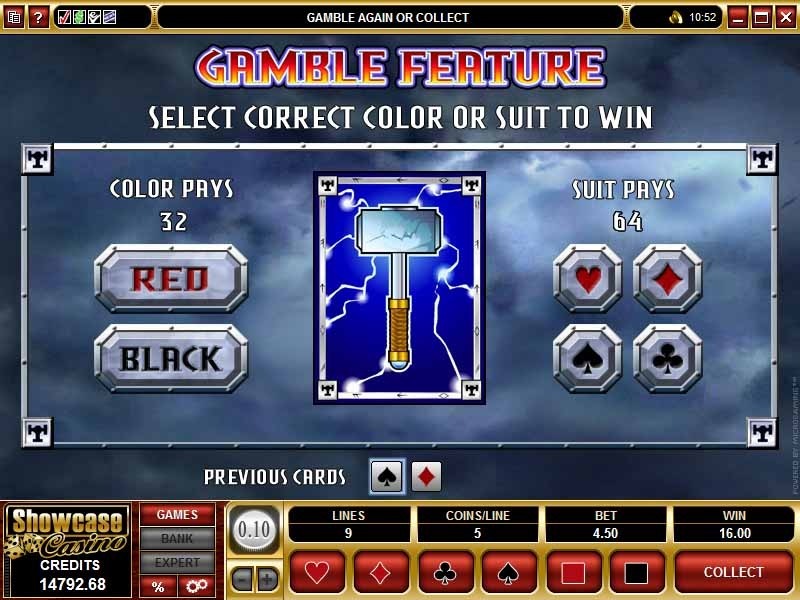