Titanic is one of the most famous movies of all time, so it’s no surprise that there’s also a slot based on it. Featuring all of the famous characters from the film, as well as a soothing soundtrack, fans of the 90s movie should really enjoy every spin at this slot from Bally Technologies – although those looking for more action-packed slots might not be so taken by the gameplay.

As already mentioned, many of the main characters from the movie are found on the reels, including, of course, Jack and Rose, who are played by Leonardo DiCaprio and Kate Winslet. The symbol featuring both Jack and Rose is the highest paying symbol, however the game’s logo and the individual Rose and Jack symbols also offer big prizes.

The way this game starts is quite unusual, as you’ll first need to choose the type of ticket you want to buy, with each one having different features attached to it – as well as having different minimum bet amounts. If you want all of the features active, you’ll need to choose the 1st class ticket, while choosing the 2nd and 3rd class tickets will see features removed. The 25 paylines are fixed, so there’s no option to alter the amount you play.

There are absolutely loads of different bonuses at Titanic, and the first thing to mention is the wild symbol, which is represented by the Titanic logo. There is also a Mystery Double Wilds feature, which occurs randomly. When activated, you’ll receive between two and five double wilds on reels two, three, four or five. That’s not the only special feature associated with wild symbols though, as there’s also the Mystery Reels Wilds feature, which is also random. This will see two entire reels turn wild, while any scatters will be turned into extra wilds.

The Jack and Rose symbol, as already mentioned, is one of this slot’s scatter symbols, as well as the jackpot symbol. Scatter symbols don’t need to be lined up on a payline to award a prize, but can instead be scattered anywhere on the reels.

There’s another random feature to mention, and it is called Jack’s Drawing Mystery Feature. You’ll need to keep selecting from options until you find three matching prizes, which you will then win.

The main feature at this slot is activated when you spin in three ship symbols anywhere on the reels. You’ll then see a wheel spinning, which will select the bonus you receive. There are four in total, and they are: Make It Count, Heart Of The Ocean, Pick Up, and The Safe Feature. All of these features can lead to some really nice prizes. The ship symbol is also a scatter symbol at this game.

Finally, there are the Mini and Maxi Jackpots, which are displayed at the top of the screen. These can be won randomly after any spin, aside from spins that activate the main wheel feature.

If it’s bonuses you like, Titanic should be a fantastic slot for you. The bonuses aren’t this slot’s only great aspects though, as the theme is also a great one, and the gameplay is incredibly fun. There’s no doubting that by creating Titanic, Bally Technologies have made one of the best slots around. 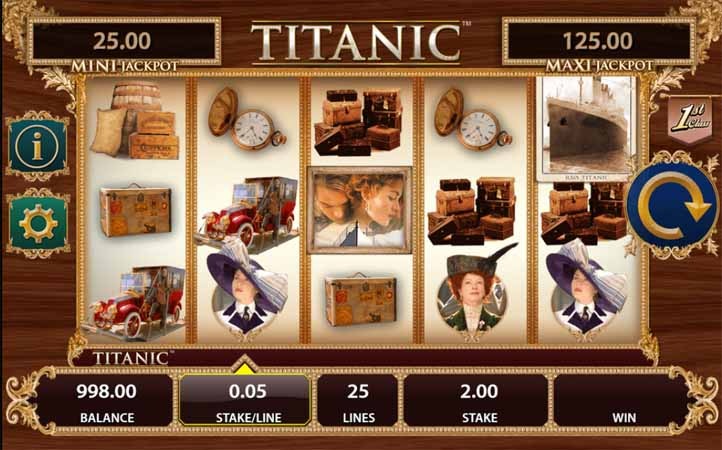 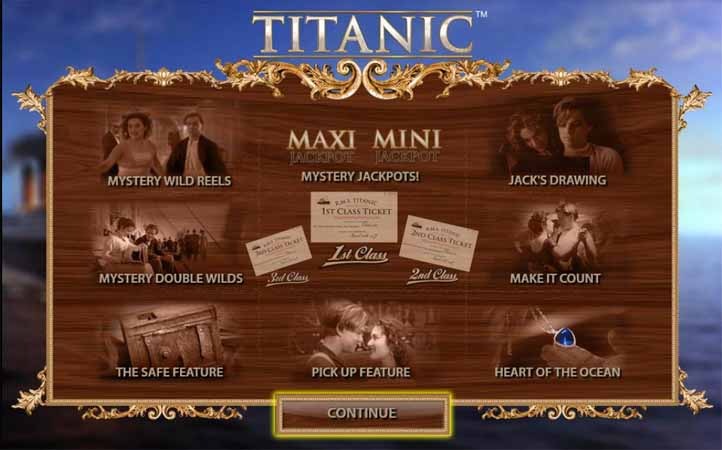