Titans of the Sun Theia

Titans of the Sun Theia Review

This is an interesting online slot release from Microgaming that represents the female version of another game with a similar name but it ends with “Hyperion” which is a male character. As soon as you start the reels spinning you can notice that there are 5 reels, 15 pay-lines and there are tons of features available and this means that the right combination of symbols can bring you up to 1000 times the amount you’ve wagered, plus there is the chance to win 15 free spins.

The theme of this video slot machine has an inspiration that leads you to the Greek mythology. The action happens in a very nice setting where you can see some rocky shores of a Mediterranean island. The symbols are split in two and there are the low paying ones that are the standard 9 to Ace. There are also the high value symbols like: the flaming horse, the birds and there is also Theia. The latter are the ones that you should wish to see a lot on the reels.

Titans of the Sun Theia is packed with just the right amount of special features. These are the ones to bring you the money and they are also enhancing the game visually.

One of the special features is the wild. This is the one to substitute any other symbol you need with one exception: the scatter. You can easily recognize it when you see it as it’s a sun symbol. The scatter is represented by a silhouette of both Hyperion and Theia.

The free spins round is triggered the moment when you have at least 3 scatter symbols positioned anywhere on the reels. When this happens, there are 15 free spins awarded and in case you land again on at least 3 of these symbols, there you have the possibility to retrigger this feature and get even more free spins. The wins that you get from the free spins are all multiplied by 2x and there is also the stacked mystery symbol that could appear and enhance your winnings immediately.

The sun symbols are called the Stacked Mystery Symbol at Titans of the Sun Theia slot machine. Every time a symbol like this appears on your reels they will be transforming into any other symbol with one exception: the wild. In case you get this stacked symbol during the free spins, then you have the possibility to forget about that exception.

Overall Titans of the Sun Theia slot is able to provide the Microgaming slot fans with a nice game that is packed with the right features, a good pay-out and an interesting Greek Mythology theme.

Titans of the Sun Theia Information 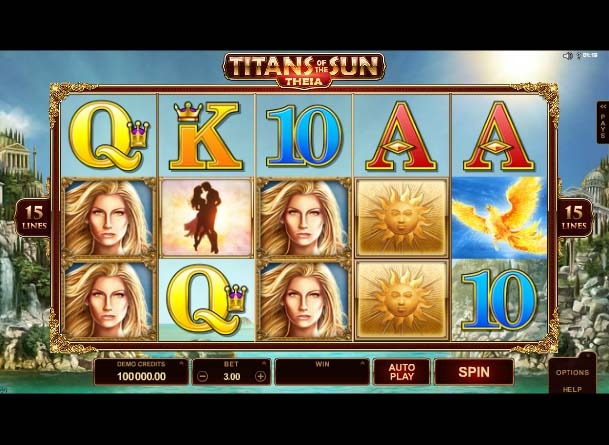 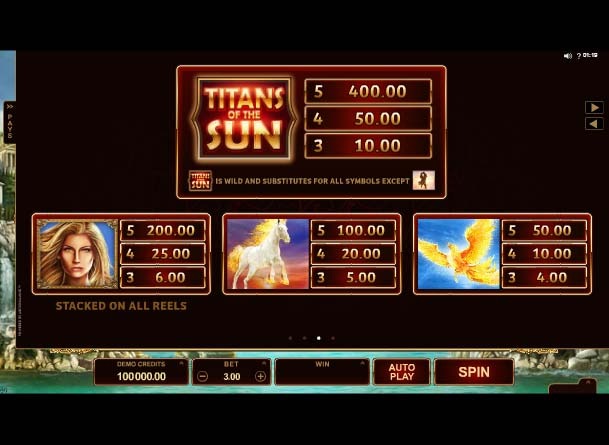