Tomb Raider is one of the most popular computer games of all time, and fans of Lara Croft can also play a great slot centred around her, thanks to the people over at Microgaming. When you play, you’ll find the same retro graphics found on the original version of the Tomb Raider franchise, plus you’ll also find all of the action and excitement always associated with the world’s best-known female adventurer…

Before you get to join Lara Croft on her adventure, there are a couple of things that you’ll need to do. Firstly, you’ll need to decide how many of the 15 different paylines you want to play, remembering that more paylines lead to more chances of winning. You’ll then need to decide how much to bet per payline, which can range from one through to five coins. When you’ve made those choices, it’s time to spin the reels and get the adventure started.

As you might expect from one of the most popular slots ever produced by Microgaming, there are some great features to keep players interested at Tomb Raider – features that can lead to some particularly nice prizes. The most basic of these features is the wild symbol, which is represented by the game’s logo. This is only a normal wild however, meaning that it has no special features attached to it – it would have been nice if Microgaming had made it a bit different from the norm. The wild symbol is also the jackpot symbol at this slot, with a top prize of 7,500x your bet per payline.

The next feature to mention occurs when three or more scatter symbols land on the reels. When this happens, you’ll be given 10 free spins, which can be retriggered while the feature is active. The biggest prizes of all can be won during these free spins, as any win that you manage to spin into view will the tripled.

The final bonus to mention is the Tomb Bonus, and it’s the only second-screen bonus game at this slot. It’s started by getting three or more idols on an active payline, and sees players picking from different tombs, revealing prizes as they do. It’s not really the most interesting bonus game ever offered at an online slot, however it can lead to prizes of up to 2,500x your bet per payline, so is well worth playing.

Even if you aren’t a fan of Tomb Raider, you’ll still love the excitement offered by the slot of the same name. The bonuses are all really good, while the theme has enough excitement to keep players interested throughout their time at the game. The real stars are the prizes though, especially if you manage to spin in a win while the free spins are active. 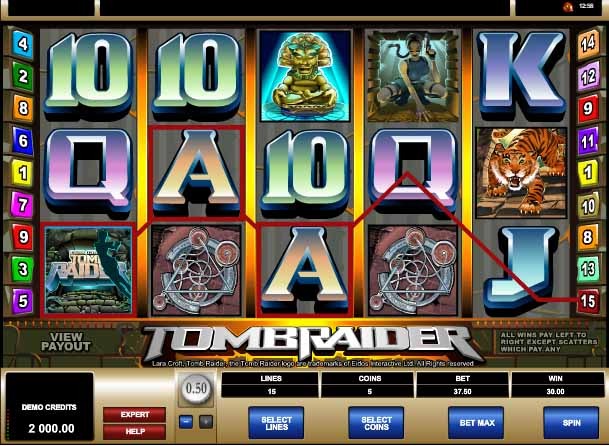 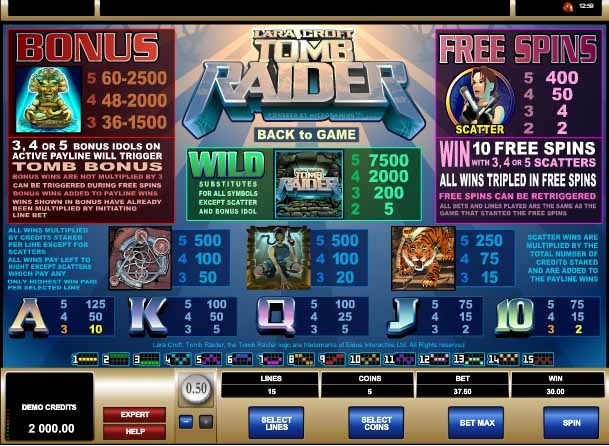