There’s been a sense of anticipation in the online slots world recently, as fans awaited the new slot machine from the people over at NetEnt. Well, the game has now been released and Vikings is certainly everything that slots players could have wanted. You’ll find big prizes (a given for most NetEnt slot machines), as well as great graphics. When the fantastic bonus features are added into the mix, there really isn’t anything to dislike when it comes to this casino game. Why not find out more about Vikings from NetEnt by reading through our detailed review below?

This is a slot with five reels and three rows, so it looks like most other slot machines. You’ll find that the layout of the reels can change when you activate one of the bonus features though, but more on this later in the review. During the base game, there are 243 different ways to win. This simply means that you need to get three or more identical symbols on consecutive reels, starting from the first reel, in order to win a cash prize. There is no way to change the number of ways to win, but most would choose to play the maximum number of them anyway.

The minimum you can bet per spin is 20p, so this means that the minimum bet is slightly higher than you’ll find at some other slots. Most should still be able to afford to play though. The maximum bet amount per spin is £100, which should be enough for all but the highest stakes players. Changing the amount of money you bet is simple: just change the Level and Coin Value fields. As is the case with most online slot machines, you’ll find bigger prizes on offer as you bet higher amounts. Don’t bet more than you can afford to lose though.

But how much money can you win when playing this game? Well, as you’d expect from a NetEnt slot, the prizes can be huge. The most you can win per spin is an impressive 607.5x your stake, however the biggest prizes are found during the free spins, when you can win up to 10,000x your stake on every free spin of the reels. You can learn more about the free spins in the next section of this Vikings slot review though. You’ll find that this is a medium to high variance machine, so you might have to wait a while to receive a win. When it does arrive though, it could be a really large one.

NetEnt slots are known for having some fantastic bonus features, and you won’t be disappointed when you play Vikings. The first of the bonus features to mention is called the Hotspot feature and this can lead to some big prizes. Essentially, the whole of the third reel is a hotspot, and when you get one of the four different stacked Viking symbols fully covering the hotspot, the feature will activate. When it does, you’ll find that all other Viking symbols on the reels will turn into the Viking covering the middle reel. So, if you get Floki covering the middle reel, all other Viking symbols will transform into Floki too.

That’s not everything when it comes to the Hotspot feature though, as this feature has even more to offer. This is because you’ll find that once this feature is active, all Viking symbols will pay as if they’re scatter symbols. So, if you get three or more anywhere on the reels, you’ll find yourself winning an instant cash prize!

Next up, there’s the Shield Wall feature, which can be triggered in both the base game and the free spins feature. You’ll find that the shield wall appears randomly. It appears as a large cluster of mystery symbols. You’ll then find that all the mystery symbols transform into the same symbol, meaning that you could get some fantastic winning combinations.

Finally, there’s the great Raid Spins feature, which is where you can earn the biggest prizes. You’ll activate this feature when you manage to get three Raid Spins symbols anywhere on the reels. When the Raid Spins feature is active, you’ll be playing on a set of seven reels, instead of five. This means that you’ll have a staggering 78.125 different ways to win! During the Raid Spins feature, reels three, four and five act as hotspots. This gives you the chance to turn loads of symbols on the reels into the same Viking symbol – something that can lead to big prizes. The most you can win on a free spin is a massive 10,000x your stake.

So, what do we think of NetEnt’s new online slot machine? Well, we think that there’s not much to complain about at all. The prizes are huge, especially if you can activate the Raid Spins feature, plus you’ll find loads of excitement on every spin of the reels. We’d recommend this slot machine to everyone, so why not play it at one of our recommended NetEnt online casinos today? 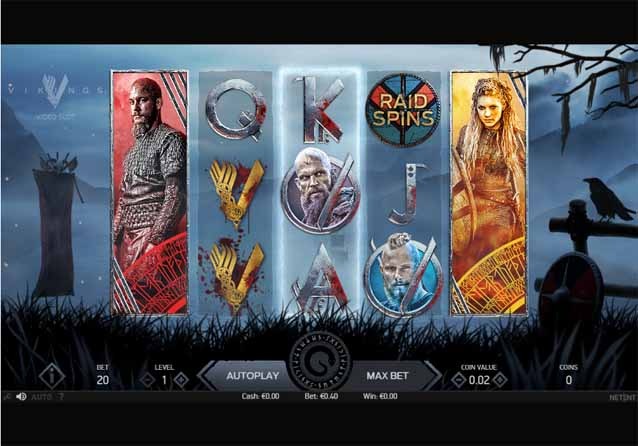 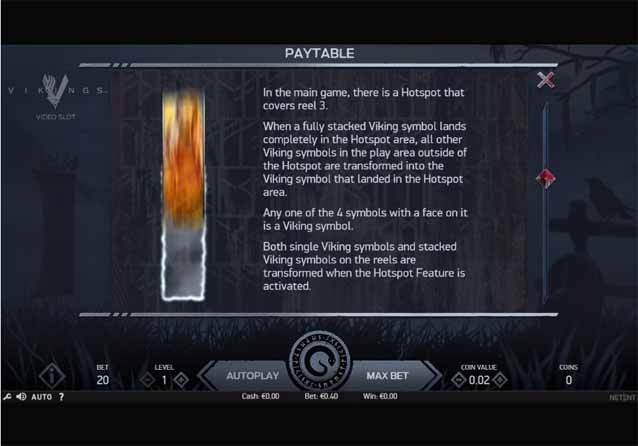