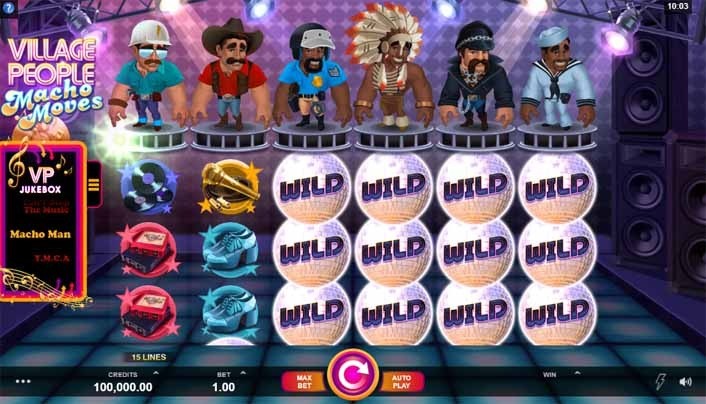 Even those who didn’t grow up in the 1970s are probably familiar with the Village People. This eccentric band is a staple of pop culture in the U.S. As a result, Microgaming released an online video slot machine called Village People Mach Moves.

Everything about this game screams 1970s. Before players even get started with it, they will know they are in for a treat. During gameplay, various Village People songs are heard in the background. The included jukebox lets players choose from a list of the band’s biggest hits, including Y.M.C.A.

The graphics are typical of a 1970s disco. On top of the reels each band member is featured. The symbols seen on the reels are sunglasses, microphones, dancing shoes, disco balls, and records. While the reels are spinning, the band members are seen above, dancing to the music.

The bonuses in this game include VP wild tokens and symbols. The VIP wild symbols expand to cover the entire reel, increasing the amount of money players win. There is even a meter that holds the wild tokens as they are collected. This helps motivate players to keep spinning the reels. When they collect five tokens in the meter they get five spins for free. During free spins, players will experience one of the many bonus features.

Each band member has his own bonus. For example, the construction worker adds multipliers to the reels randomly. They become stacked, allowing players to win as much as 20 times their bet.

Before any spin of the reels, the cowboy can come along and add as few as two or as many as 12 wilds to the reels. If the cop comes along he will make two, three, or four of the reels full of wilds. The Indian makes two of the reels on the screen walking reels. When this happens, every time the reels are spun the walking one moves across the game screen.

The motorcycle Village Person takes low paying symbols away and puts a high paying symbol in their place. The sailor is responsible for adding locked wilds to the reels. He can add one, two, or three locked wilds. 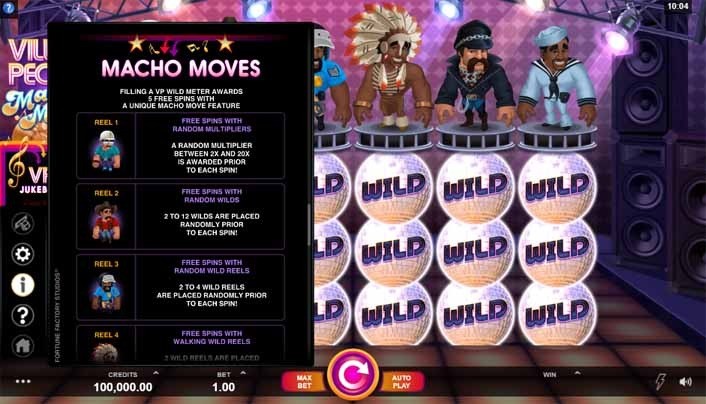 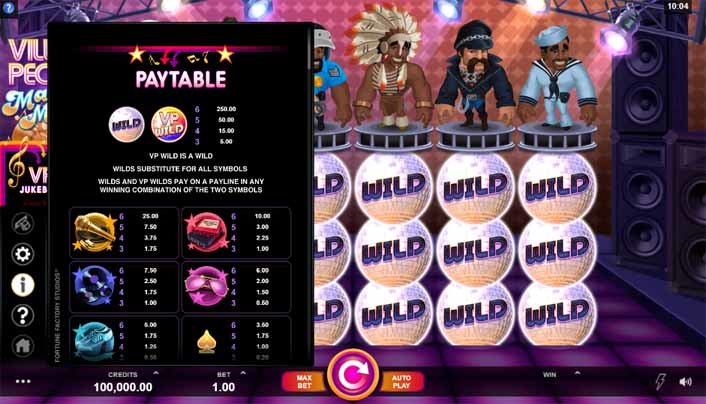 Village People Macho Moves is one game that everyone can enjoy. Even younger players that aren’t familiar with the band will enjoy the many bonus features. And while fans of the band’s music can feel free to listen to its songs while playing, those who aren’t interested can turn the jukebox off.

Either way, the energy level of this game is enough to keep players interested in it. It is the best way for players to enjoy a virtual disco.