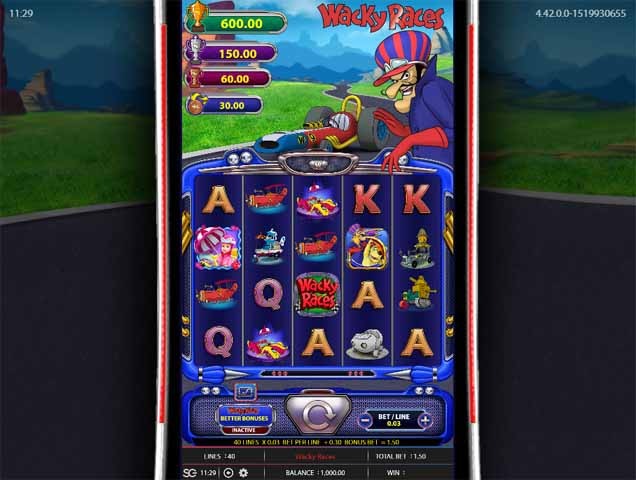 If you spent hours as a kid watching the Wacky Races on TV, this could we be the perfect slot for you. Featuring all your favourite characters from the TV show, including Dick Dastardly and Mutley, this game has twists and turns constantly, just like one of the racetracks the characters are seen on, and you could also win some huge sums of money if you’re lucky enough. So, if you want to find out more about this fantastic game from Bally Tech, why not take a read through the Wacky Races online slot review below?

The graphics of this slot will instantly bring back memories of the TV show and you’ll see many famous names spinning around on the reels. Can you remember the names of all of them though? We’ll start you off with a few, as we can see the ever-popular Penelope Pitstop, as well as the distinctive plane of Red Max.; There are plenty of others though, and you’ll have loads of fun whenever a new character spins in on the reels. As is the case with the TV show, the main character is Dick Dastardly though, and he appears above the reels, as he plots to stop the others from winning this episode’s race.

Wacky Races is a slot with five reels, and these reels are each four symbols high – making them slightly different to the ones usually seen at online slots. This slot also has an impressive 40 paylines, and these paylines are fixed. This means that you have to have 40 paylines in play on every spin. This shouldn’t be an issue though, as experienced online gamblers will tell you that it’s prudent to always have the maximum number of paylines active – if you need to reduce your bet, instead alter the bet amount.

But what are the prizes like at this online slot? Well, the most you can win on a single payline during the base game is 500x your bet per payline. This isn’t the highest possible overall win though, as you can get multiple winning combinations per spin. This is because symbols can come stacked in this game. The bonus features also offer the chance to win some huge amounts of cash, as you’ll see when you read through the next section of this Wacky Races online slot review.

There are some absolutely fantastic bonus features at this online slot, all of which massively increase the excitement you’ll experience when you play. The first of these bonus features to mention is the wild symbol, and this is represented on the reels by the Dick Dastardly symbol. It can substitute for most other symbols on the reels, and therefore it can help you to spin in some really impressive winning combinations.

There are then two random features to mention, both of which can happen after any spin. The first of these is the Random Wild feature, and this sees up to 10 wilds being placed on the reels (or up to 11 wilds if you have the Better Bonuses feature activated). The other is the Wild Reels feature, and this will see one or more reels turning entirely wild. These random features lead to loads of excitement, plus they can also provide some nice prizes, although the prizes aren’t generally as good as the ones found during the main bonus rounds.

The main bonus starts when you manage to get three Wacky Races logos or three Wacky Races wild symbols on the first, third and fifth reels. You’ll then head to the racetrack, where five racers are lined up and ready to go. You’ll randomly be assigned one of them, and you’ll get a bonus added to the feature if your racer wins. The racer winning the race will dictate which of the bonus features you activate. 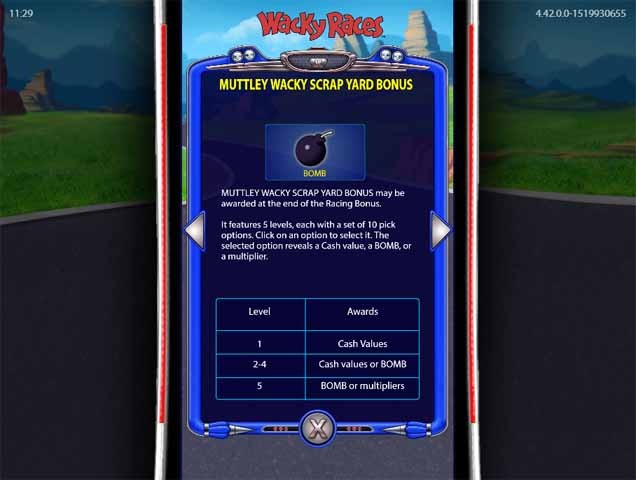 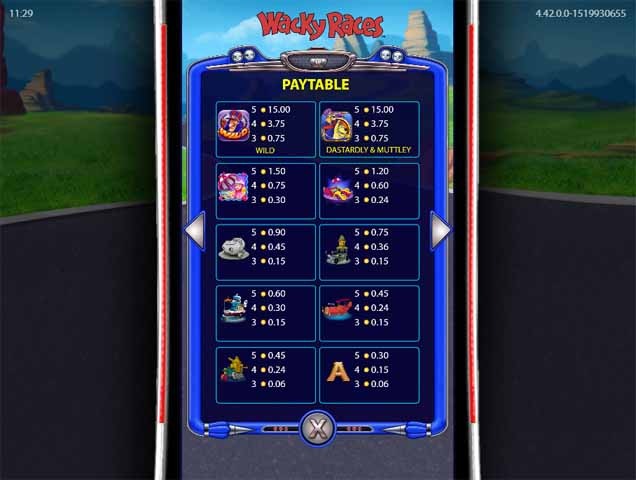