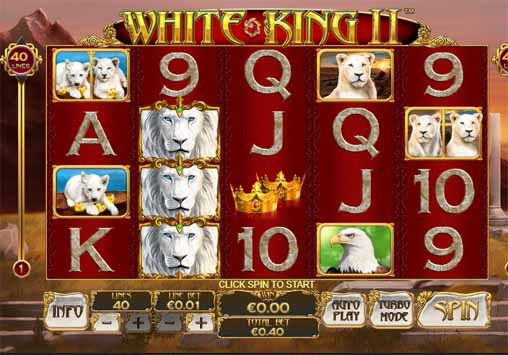 White King is one of the most successful slots ever released by Playtech, so it’s no surprise to find that they’ve now created a sequel to this fantastic game. It’s called White King II – so they won’t win any prizes for originality – and it has everything you could want from an online slot, including great bonus features and some really impressive prizes. So, why not find out more about this online slot by reading through our detailed White King II review today?

Visually, the Wild King II slot is much like the original game in the series. This means that you’re going to see beautiful white lions spinning around on the reels. The backdrop to the game has also been perfectly created, meaning that this slot really is visually stunning. The audio is also pretty good and it certainly doesn’t interfere with the overall feeling that the game manages to give.

White King II is a video slot with five reels and four rows, meaning that the playing surface is larger than most other online slots. You will find that there are 40 paylines spread across the reels, meaning that you should find plenty of action when you play. These paylines are not fixed, so you can lower the number of paylines you have active. Why would you want to reduce this number though?

But how much money will you have to spend when playing this game? Well, the minimum bet per spin is just £0.01, and this comes when playing at the lowest stakes and when you have just one payline active. The most you can bet per spin is a massive £400 though, which should be enough for even the highest spending online slots players. To reduce your bet per payline, just click the plus and minus buttons below the Line Bet section. The more money you bet per spin, the bigger the potential prizes will be.

Perhaps the most important thing to look at in this section is the amount of cash you can win. As you might expect, the jackpot at this game is a really big one, and it’s won when you manage to get ten symbols in a row – more about how you can do this later in this White King II review – during the free spins. If you can do this, you could find yourself winning a massive 5,000x your bet. The highest paying symbol on the reels is the wild symbol, so you’ll want to see it as often as possible, while the lowest paying symbols are the 9-A ones, as you might expect.

There are many great features to this online slot, however none are more impressive than the double symbols. These are easy to spot on the reels, and they mean that you could get a massive 10-in-a-row winning combination when you play! This adds a whole new element to this online slot machine, and it also makes White King II one of the most exciting online slots currently out there.

The main bonus feature at this slot is the free spins though, and these are activated when you manage to get three or more scatters (the game’s logo) on the reels. The number of free spins you get depends on the number of symbols used to activate the feature, and if you can get six scatters, you’ll win a massive 50 free spins. While the free spins are active, you’ll find that there are more wild symbols and double wild symbols on the reels, giving you a better chance of winning some really nice prizes. Get the entire slot filled with double wild symbols and you’ll in 5,000x your bet, which is amazing.

That’s all when it comes to the bonus features – like the original game, there aren’t loads, however there are still more than enough to keep you excited about playing. 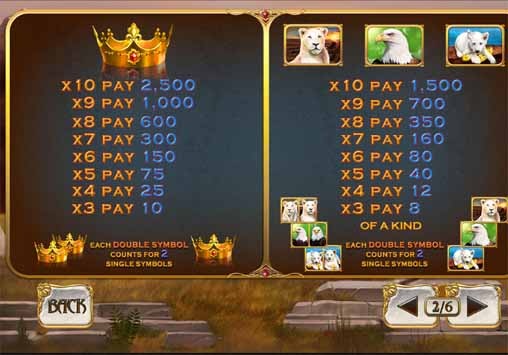 Play now at these online casinos!